Discover the 2 Types of Rattlesnakes in Wisconsin

Located between the Great Lakes and the Mississippi River, the midwestern state of Wisconsin is famous for its dairy farming, cheeseheads, beer, and the Green Bay Packers. In the midst of the hustle and bustle of human life, however, there is also a wide range of wildlife in Wisconsin! 668 native mammals, amphibians, fish, birds, and reptiles—including at least 21 species of snakes. Unfortunately, at least 14 of the 21 types of snakes in Wisconsin are either threatened, endangered, or a Special Concern Species within the state, including Wisconsin’s rattlesnakes.

While you might shutter to think of running into a rattlesnake in Wisconsin, it is important to remember that all the snakes in the state are vitally important to keeping the ecosystem balanced. In addition, rattlesnakes are quite rare in Wisconsin, so the chances of seeing one are low. However, this article will help you learn how to identify Wisconsin’s rattlesnakes and learn more about them so that you won’t need to fear enjoying your time outdoors. So, let’s take a closer look at the two types of rattlesnakes in Wisconsin!

The first rattlesnake species found in Wisconsin is the timber rattlesnake. These large snakes only live along the western edge of Wisconsin. They prefer to live in deciduous forests and areas on the edges of woodlands during the summertime. Gravid female snakes (ones that are pregnant) and juvenile snakes, however, prefer to stay in open areas with bluff prairies during the summer because they like it to be a little warmer. But they also need to be able to avoid getting too hot by having places to go to get shade, like brush, trees, or rock shelves.

Timber Rattlesnakes come out of brumation or hibernation (when they sleep for a long time during the winter) as early as April 1. However, they can also come out of hibernation well into June. They remain active throughout the summer, until as late as mid-October. Timber rattlesnakes breed in August, and female snakes give birth to their young in mid-August or mid-September the following year. Female timber rattlesnakes in Wisconsin usually only have babies once every three to four years.

Timber rattlesnakes are not very common in Wisconsin and are officially Protected Wild Animals in the state. They are also listed as a Special Concern Species. Timber rattlesnakes are large snakes with heavy bodies and keeled scales. They have big, triangular-shaped heads that are often a light gold color (although occasionally some snakes have black heads). Timber rattlesnakes in Wisconsin typically grow between 36-56 inches long, with yellow, rust-orange, brown, or gray bodies. Dark brown or black zig-zag bands run along their backs, and the ends of their tails are black with a tan-colored rattle.

Although timber rattlesnakes are quite venomous and can be dangerous, they are extremely calm and rarely strike. Instead, they will first attempt to hide using their well-camouflaged bodies. If that doesn’t work, timber rattlesnakes will rattle a loud warning to try to scare off any threats. Most timber rattlesnake bites happen only because the snake was either purposefully harassed or because an unsuspecting hiker accidentally stepped on it! That is why it is so important to look carefully when you are enjoying the wild outdoors in Wisconsin.

Wisconsin’s other rattlesnake species, the eastern massasauga rattlesnake, is even more rare than the timber rattlesnake. Eastern massasaugas live in the southwestern areas of the state and are both a Federally Threatened Species as well as a State Endangered Species. They are sometimes called “swamp rattlers” because they prefer moist and wet areas along streams and rivers. They often live in floodplain habitats near rivers, open canopy wetlands, fresh wet meadows, sedge meadows, shrubby areas, or nearby upland prairies.

During the spring, eastern massasaugas begin to emerge from their winter brumation or hibernation, usually sometime in early April. They are active throughout the summer until the middle of November, when they seek out underground mammal or crayfish burrows, sawdust piles, old stumps, and rotted out root channels to sleep in for the winter. Eastern massasauga rattlesnakes breed in August, and female snakes give birth around the same time the following year.

The smaller of Wisconsin’s two rattlesnake species, eastern massasauga rattlesnakes grow between 20-32 inches long. They have heavy bodies, keeled scales, and broad heads. Their bodies are usually light brown, tan, or gray, with brown blotches or “saddles” running along their backs and sides. There are 5-7 dark rings at the end of the snake’s tail, just before its grayish-yellow rattle. There are three dark stripes and one white stripe on either side of the snake’s face.

Although they are venomous, eastern massasaugas are extremely secretive and shy, and do their best to avoid people whenever possible. Furthermore, these snakes are extremely rare in Wisconsin, so you don’t need to worry about them. As long as you keep an eye out when you venture into the outdoors and give wildlife appropriate respect, you have no need to fear rattlesnakes in Wisconsin.

Although rattlesnakes in Wisconsin are very rare, there are many other snake species in the state that are often misidentified as rattlesnakes. This is due to their similar colors and patterns, and because of their defense mechanisms. Many of Wisconsin’s snakes vibrate their tails when they feel threatened. If they vibrate their tails against gravel, vegetation, or dry leaves, it can make a rattling sound, much like a rattlesnake. Some of these snakes also act surprisingly aggressive when they try to scare off predators, whereas the two rattlesnakes in Wisconsin are typically nonaggressive and shy. Here are a few examples of rattlesnake mimics in Wisconsin.

Found all over the state of Wisconsin, the eastern fox snake may look like a venomous snake, but it is completely harmless to humans! These snakes have tan bodies with reddish-brown blotches or patches, and often mimic rattlesnakes when they feel threatened. Many people mistake eastern fox snakes for rattlesnakes, or even for copperhead snakes (although they are no copperhead snakes in Wisconsin). Eastern fox snakes common in prairies, old fields, meadows, and forests, and grow between 36-56 inches long.

Another rattlesnake mimic in Wisconsin is the bullsnake or gopher snake, a large snake that grows between 50-80 inches long. These are some of the biggest and heaviest snakes living in Wisconsin and have rather thick bodies like timber rattlesnakes. However, bullsnakes have round pupils (as opposed to the vertical pupils of rattlesnakes) and are completely harmless to humans. Although they can have colors and patterns similar to a rattlesnake, bullsnakes often have colors that change along their back. Some snakes almost look like three separate snakes that somehow got fused together! Bullsnakes live in western Wisconsin in oak savannas, oak and pine barrens, and sand prairies.

Another harmless snake in Wisconsin is the eastern milk snake, a medium-sized snake that grows 24-36 inches long with smooth scales. Milk snakes live in the southern 2/3 of Wisconsin, typically in pastures, prairies, forests, savannas, vacant lots, and around farm buildings or older homes. They have light brown or gray bodies with three rows of brown or red-brown blotches with black borders along their backs. Most milk snakes also have a “V”- or “Y”- shaped mark on top of their heads.

A rather formidable-looking snake, the common water snake has a heavy body with keeled scales and can grow between 24-40 inches long. These snakes live all over Wisconsin anywhere there is water, usually in or close to clean rivers. They eat fish, amphibians, and crayfish, and can often be seen swimming through the water or basking on rocks or in branches hanging over the water. People often get scared thinking these snakes are cottonmouths, but don’t worry—there are no cottonmouths in Wisconsin. Water snakes are not venomous, but they can have a bit of an angry attitude and bite hard, so it is best to leave them alone.

What are the two types of rattlesnakes in WIsconsin?

The two rattlesnakes in Wisconsin are the Eastern Massasauga Rattlesnake and Timber Rattlesnake.

Although timber rattlesnakes are quite venomous and can be dangerous, they are extremely calm and rarely strike. 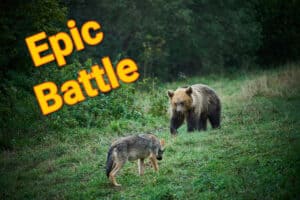