Greece is a land renowned for its beauty, its location on the Mediterranean Sea, and its rich history. The nation is also known for being home to many islands. After all, Greece’s city-state Athens dominated the seas with its navy in the ancient world. In this article, we’re going to explore the largest Greek island. We’ll also show you how many islands are in this country, how big they are, and how they’re governed.

How Large is Greece?

As a nation, Greece has a land area of 50,950 mi². Out of all that land, Greece has 8,497.9 miles of coastline. So, it is no wonder that so much of the country is centered around making a living by the sea. One of the main industries in this nation is tourism, with people coming from all over Europe to enjoy the sites, sea, and more.

All in all, this is not a very big country, but it seems larger due to all the coastlines.

How Many Islands Are in Greece?

Greece is known for having many islands. In fact, it has so many islands that the numbers of islands vary depending on the source. Some sources claim that the country has 6,000 islands and 227 of them are inhabited. Thousands of other islands are uninhabited. However, other sources say that the number is far lower, with estimates as low as 1,200 different islands.

Now, you may think that Greece must have a lot of space if it has so many islands, but that’s not the case. Many of these islands are very small, and only a few are large. Of the potential 6,000 islands, only 31 of them have 37 square miles of land on them or more. Furthermore, none of them have a large population. In fact,  only five of these landmasses have a population of over 100,000!

Thus, Greece is home to many different islands that have various features and different numbers of people. Let’s take a look at what having all these islands means for the country.

Why Greece a Popular Tourist Destination

Since Greece is located on the water and has hot weather throughout a large portion of the year, it’s a major tourist destination. Many of the islands have hotels, boats, and restaurants that support the tourists that come to the island.

Some of the most significant reasons that people travel to these islands are the culture and the coastlines. Greece is home to 18 United Nations Educational, Scientific, and Cultural Organization (UNESCO) World Heritage Sites. These are places of great significance in the world, and a lot of important events happened in Greece.

For example, Athens is the Greek capital city, and it is home to many famous sites including the Acropolis, Plato’s Academy, and the Temple of Olympian Zeus. People come from all over the world to explore these historical and religious areas.

Of course, people also enjoy the Greek islands for a more practical reason: the coastlines. Between the peninsula and the islands, people can enjoy the beautiful sea waters. Every island has long coasts, allowing tourists to feel less crowded as they enjoy the sun, go fishing, or travel on boats.

Vacationers as well as those who want to explore the past all have a good reason to visit these islands.

What is the Largest Greek Island?

The largest Greek island is Crete, and it has an area of 3,260 square miles. That makes it the fifth-largest island in the Mediterranean Sea. Compared to the total land area of the entire country at 50,950 mi²,

Interestingly, Crete is not that close to the mainland. It’s just about 100 miles away.

The island of Crete has the largest population of any in the nation, with 636,504 people living on this island. Moreover, the largest city on this landmass is a city called Heraklion, totaling 144,442 people as of their last census. About 60% of people live in cities and the remaining 40% or so live in rural areas.

An interesting fact about this island is that it has two powerful means of economic generation. First, like most islands in Greece, Crete has a powerful tourist and service economy. Moreover, this land is home to a lot of agriculture, too.

That means the largest Greek island is one of the most economically stable of them all. All in all, this island is large, packed with attractions, and still an economic powerhouse.

The second-largest island in the country is called Euboea, and it also goes by Evvia. This island is roughly 60 miles from the coast of the mainland. The island measures 1,422 square miles, and it has a population that is roughly 200,000 people. This land has a rich history, and the island is known for its mining facilities in the present.

How Are the Greek Islands Grouped?

As we’ve already said, the Greek islands are spread out over a fairly large area. So, it only makes sense that they must be grouped into regions for reference. That way, people on vacation and government officials alike have some way to consider a specific group of islands. Take a look at some of the ways that the Greek islands are grouped.

Generally speaking, the clusters of islands are:

We don’t have time to go through each of these islands. Yet, you should know that Crete is considered one of the North Aegean Islands. Over a thousand islands are spread between the rest of these groups.

Although Greece is not a very large nation, it’s loaded with islands. Some of them are very small, and some of them are rather large. The largest Greek island, Crete, is a beautiful, sustainable, and one of many places that features amazing views of the Mediterranean Sea and attractions.

All in all, these land masses are rather small, and many other larger islands exist throughout the world. Moreover, other countries have many more islands than Greece! 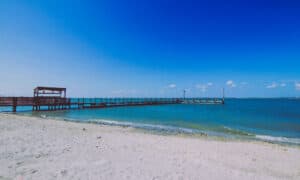