Elk Poop: Everything You’ve Ever Wanted to Know

What kind of animal is an elk? We’ll tell you—the creature that many people mistake for a moose. Elks (Cervus canadensis) are fascinating creatures and make the list of North America’s biggest animals. While male elks can weigh about 700 pounds, females typically weigh about 200 pounds less. Elks have a traditional name, “wapiti,” which refers to their unique beige and dark brown coloration.

There are many things to learn about these intriguing animals. For example, they prefer cool days to hot ones, and they can live as long as 20 years. Also, elks love to move in herds primarily for protection against predators, and their activities help the ecosystem.

Do you want to learn more exciting facts about the elk? Then we’ve got a lot to tell you about their poop. Come along.

Elks share numerous characteristics with many other animals, so recognizing their poop is one way to verify their presence. An elk’s poop comes in pellet forms and oval shapes like a dark-colored almond. Elk scat can form large piles containing a good amount of cellulose. As you’ll soon discover, elks may eat different food depending on their weather; so you may notice that their scat becomes softer during winter. This indicates that they’ve eaten mountain clover, or a similar diet.

What Do Elk Eat?

Similar to other animals, an elk’s diet can determine what its poop will look like. Generally, elks are omnivores who love to consume grass; they may also eat forbs and tree barks. Elks also enjoy food from animal sources, including bird eggs, antlers, and bones. Their most common meals include timothy grass, blue grass, wheatgrass, willow twigs, aspen twigs, rowan twigs, and birch twigs.

One may also notice that these animals enjoy fescue, dandelions, willow, violets, elk thistle, acorns, heather, lichen, bird bones, goslings, and white clover, and many more. During the winter, elks will include cattails, junipers, and less nutritious grasses in their diet.

Elks are ruminants with multi-chambered stomachs that let them digest their meals properly. They practice regurgitation and chew their cud.

Baby elks (calves) feed only on their mother’s milk for almost a month after their birth before they start eating grass.

Yes, elk poop may be dangerous, and no, it may not be. It all depends on the reason/circumstance behind the question. For example, elk poop is good for plants as it contains vital nutrients that can help them develop properly. However, elk poop may be harmful to humans.

Though they share numerous similarities, deer differ from elk in various areas, including color, size, antlers, and habitats. For example, while elks live in forested mountainous areas, deer live in grasslands, deserts, forests, and plains.

Comparing their poop, deer poop looks like rabbit or goat scat, only that they’re significantly bigger than rabbit poop. They also share similarities with elk scat but deer poop is wider by a few diameters. Deer scat that is dark, shiny, and moist is likely fresh, while the lighter colored and dry deer poop may be many hours or days old.

The caribou is another animal that the elk shares striking similarities with. Both animals belong to the Cervidae family and are herbivorous creatures; they also have dense coats for keeping warm in extreme cold. However, elks are much bigger than the caribou and have a shorter life expectancy. There are also differences in coloration, sounds, hoof shapes, habitat, and antlers.

The caribou’s scat resembles those of its cousins in the deer family. Their poop pellets may be clumped or loose depending on their diet and are about half to ⅝ of an inch wide. Meanwhile, elk poop is about 1-1.5 inches in width. Caribou eat sedges, small shrubs, and lichen in winter.

Elks and cows have similar characteristics, and they’re both ruminants. However, the differences in their scat are easy to spot. Cow poop typically comes in circles and tends to be soft. Their excrement usually looks dark brown, even though some may be black, gray, or red.

As usual, one can guess a cow’s diet from its dung. For example, cows that eat lots of grass will excrete green poop, while those on a predominantly grain diet will have brown scat. Cow scat serves many purposes. First, it’s an excellent crop fertilizer, making it a vital part of organic farming. It’s also valuable for the production of fuel through cow-cakes burning.

Cow dung is also useful in the beauty industry as manufacturers use it as an ingredient in the production of face washes, shampoos, shaving creams, toothpaste, etc. It’s also valuable in paper and insect repellent production. 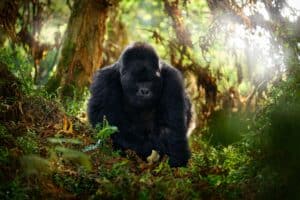