Nature presents us with a huge selection of alpha male standoffs but this footage of a male rhino and a male elephant in a toe-to-toe confrontation is one of the best out there. You can almost see the testosterone as two massive male egos clash under the heat of the African sun. The vid was captured by Joe Gregory, whilst he was on a safari vacation. Apparently, this particular site is very remote and can only be accessed by boat so we are all privileged to see such exceptional footage of the animals that live there.

The video opens when a large, male white rhino has wandered a little bit closer to a herd of elephants than maybe he should. Rhinos do not have great eyesight so this may have been a genuine mistake. He stops and tries to act casual but is spotted by a young bull elephant who clearly has a point to prove! Elephants are known to be peaceful animals and usually keep themselves to themselves. However, they will react to threats and will set out to show their dominance with displays of strength and aggression. Rhinos are very intimidating with huge heads, wide bodies, and sharp horns. But they are also usually peaceful unless they feel intimidated.

In this footage, the young bull elephant is adopting a typical dominant body language position with his head raised and his tusks held high where they can be easily seen by his opponent. He is also adopting the classic behavior of swishing his trunk and shaking his head.

But the most fascinating part of the scene is how he uses a tree branch as a weapon! At first, it’s carried high up on the bridge of his trunk and then dropped at the foot of the rhino in a “hold my coat” gesture that humans use before a fight in a bar on a Saturday night!

But things get even better than that. The rhino decides that he’s had enough of all of this and charges at the elephant with his deadly horn. Rhinos have horns made from tightly woven keratin that can grow over 20 inches in length. If horns snap off, they can grow back but this takes several years. Rhino horns are deadly weapons and have the potential to inflict a serious would, even on an elephant.

Perhaps the elephant knows that this Rhino’s horn could potentially inflict serious damage? He decides to act smart and picks up his stick with his trunk. He hurls it over the rhino’s head, narrowly missing his face. This proves to be a very successful tactic and the rhino takes several steps backward before the video ends in an uncomfortable standoff with the opponents around 10 feet apart. These two formidable animals seem to have reached a point of mutual respect and we can but hope that they both went safely on their way.

Want to See More Amazing Elephant Footage? Check These Out: 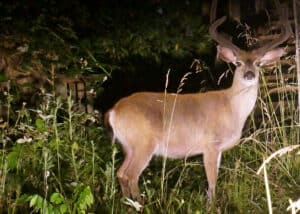