Even In Slow Motion, This Diamondback Rattlesnake Strike is Lightning Fast

When you think of lightning fast, you probably think of aerodynamics — whether it’s an underwater marvel or an aerial animal, you’re probably not thinking of something heavy-bodied. Yet, somehow, the diamondback rattlesnake is both.

“Look at that rattle … I love that sound.” You have to be a true snake enthusiast to get up close and personal with a diamondback rattlesnake and utter those words.

The Crotulas Freak on YouTube is exactly that. He manages to capture a western diamondback rattlesnake striking—and generously shares the footage in slow motion.

The video begins with the unmistakable rattle sound of the diamondback. It’s louder than you would hear it in person because the camera is right up in its face.

The rattle is right in the center of the screen, and you can see its body coil as it stares straight ahead at the human with a camera. He pans the camera over slightly to the left and you can see the diamondback in full view, its upper body lifted higher than its head.

Its forked tongue is out, exploring its environment. The tongue of diamondbacks is used as a perceiving tool. It collects different particles from its immediate environment and then transfers them to the Jacobson’s organ. This is the scent organ that communicates what the air tastes like.

You get to watch as the diamondback rattles its tail and slowly and intentionally flicks its tongue up and down. It keeps its gaze steady on the camera, assessing its proximity while it plans its next move.

The camera moves even closer to its head, and you get a unique view of the diamondback in its position as it keeps a steady pose with only its tail and tongue displaying any kind of motion.

Suddenly, the video shifts into slow motion, and the rattle sound gets distorted. The scene becomes more intense as you anticipate the strike. You gain a greater appreciation of the forked tongue as it moves much slower in front of the camera lens.

Even in slow motion, however, the diamondback is just too quick. The image distorts as it strikes. It took its time, assessed the environment, decided the camera was much too close and sent a message that it was not welcome there.

After the strike, it again keeps its gaze steady on the camera as if to say, “you want another?” The cameraman, having captured the incredible footage decides one strike is one too many and backs off.

He explains in the video description that as soon as he stepped back, the diamondback went back to minding its own business. He acknowledges that yes, they can be scary, but they’re more something to marvel at than to be afraid of.

Up Next, More Up-Close Footage of Snakes:

Watch The Incredible Way This Snake Climbs STRAIGHT UP a Tree 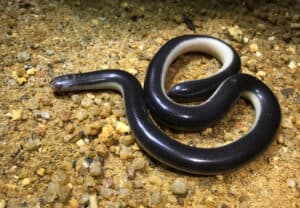