People tend to think of the T-rex as the biggest, meanest dinosaur to ever walk the planet. While they may be right, a few other powerful dinosaurs were actually larger than the massive theropod. The Spinosaurus is believed to be the largest carnivorous dinosaur in the world’s history. Yet, that doesn’t mean it can immediately be considered the deadliest. The Giganotosaurus was another massive dinosaur that could go toe-to-toe with the T-Rex. With that in mind, let’s consider a Giganotosaurus vs Spinosaurus matchup and see who wins among the true giants of the ancient world.

We can look at this fight from many different perspectives and show you how this battle would end.

Comparing a Giganotosaurus and a Spinosaurus

What Are Key Differences Between a Giganotosaurus and a Spinosaurus?

These differences are massive, and they will certainly inform the outcome of the fight. However, we need to look at more information to decide which animal is going to win this battle.

What Are the Key Factors in a Fight Between a Giganotosaurus and a Spinosaurus?

The most important factors in a fight between the Giganotosaurus and Spinosaurus will mirror the same elements that are significant in other dinosaur battles. We must compare size, predatory behaviors, movement, and more. With these factors fully explored, we can decide which creature would win the fight.

The Spinosaurus was larger than the Giganotosaurus, but we don’t know by how much of a margin. Some reconstructions pin the Spinosaurus as weighing as much as 31,000lbs and others say it was closer to 20,000lbs. Either way, we know this creature stood about 23ft tall including its massive spinal fin, and measured about 50ft to60ft.

The Giganotosaurus was also very large, weighing between 8,400lbs and 17,600lbs or up to 30,000lbs based on some estimates. This dinosaur stood between 12ft and 20ft and measured 45ft long including its massive tail.

Spinosaurus had the size advantage in this fight.

Giganotosaurus vs Spinosaurus: Speed and Movement

Giganotosaurus has the speed advantage on land, but it’s doubtful that it maintained this advantage in the water.

The Giganotosaurus was like most dinosaurs in that it had its massive size to keep it safe. However, it also had a relatively fast movement speed along with good senses to detect other animals.

The Spinosaurus could move between land and water, allowing it to go to a place where it had an advantage over others. Moreover, this dinosaur had a simply immense size that would make most creatures stay away.

In short, both dinosaurs were apex predators, so they were usually the meanest creatures walking around and didn’t have to worry much once they were fully grown.

The Spinosaurus was a massive dinosaur with a strong bite that was similar to that of a modern-day crocodile. This dinosaur relied on its bite to kill its prey. Their mouths were packed with 64 conical, teeth measuring up to 6 inches long. They were used to bite and hold prey. Their bite power measured between 4,200 and 6,500 PS, so it could deliver a deadly bite to foes.

Giganotosaurus also inflicted deadly bites on its foes. This dinosaur had a 6,000 PSI bite force and 76 serrated teeth that measured 8 inches in length behind every bite. Also, this dinosaur had sharp claws and the ability to ram and knock over other creatures.

Giganotosaurus had the offensive advantage for its simple yet brutal attack methods.

The Giganotosaurus may have hunted with other members of its species when it was young, but an adult likely hunted alone. These dinosaurs were large enough to use their body weight while hunting, ramming into enemies and knocking them over before commencing their assault.

Giganotosaurus favored an “attack and wait” technique where it would inflict bites and slashes on prey and then wait for them to weaken before resuming the attack. It’s not clear if this dinosaur would ambush other animals or simply use opportunistic predation.

The Spinosaurus’ bone density and other factors probably limited its ability to hunt in deep water. This dinosaur probably only hunted close to the shoreline. Nevertheless, Spinosaurus could effectively hunt on land and in the water, even pursuing and killing other theropods.

Giganotosaurus was probably the more effective hunter on land, but Spinosaurus clearly benefitted from being able to hunt on land and in the water.

Who Would Win in a Fight Between a Giganotosaurus and a Spinosaurus?

So, the Giganotosaurus was fantastic at hunting on land. It would not go into the water to fight Spinosaurus where the semi-aquatic dinosaur had the advantage. Given that this fight would happen entirely on land, Giganotosaurus would be better suited to win the fight.

Giganotosaurus would use its speed to smash into the other dinosaur and land deadly, flesh-ripping bites on it. The Spinosaurus’s bite was strong, but its teeth were built to grab and hold smaller prey, not take down massive theropods.

The Giganotosaurus would be too much for the Spinosaurus to fend off in this fight. 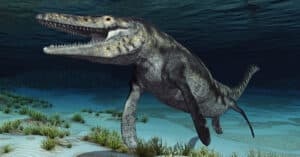