Gigantic Guard Dog Stands Up to A Bear, And Wins

Written by Angie Menjivar
Updated: August 7, 2022
© iStock.com/JZHunt
Share this post on:
More Great Content:
An Absolutely Gigantic Moose Makes These Grizzlies…
See The Footage of The Rarest Bear…
Silverback Gorillas vs Grizzly Bears: Who Would…
Why Did Cave Bears Go Extinct?
5 Massive Bears Larger Than a Grizzly
Watch a Grizzly Drag a Moose Calf…
↓ Continue Reading To See This Amazing Video

If you live in an area where bears are present and you have a dog, this next clip is something straight out of your worst nightmares.

The scene opens with a shot of a road and lots of trees and grass lining it on the left-hand side. It’s not otherwise apparent but the title of the video places this event in Greece.

Coming out of the greenery is a bear walking menacingly toward what appears to be a Great Pyrenees. These dogs are quite sizable and looking at them facing each other, you can see that the dog’s body is smaller than the bear’s, but this dog definitely has a presence that matches that of the bear’s.

The bear probably doesn’t think that this fluffy white dog is much of a match for it. But it better think again.

The dog can be heard barking wildly from the very first second of this video. You can see it wagging its short tail and keeping its eyes steady on the bear in front of it.

It’s like a dance—although the only soundtrack here is the unceasing barking of the Great Pyrenees.

The bear keeps walking backward into the grass while the dog keeps moving forward, continuing to bark loudly. As if shamed by the dog, the bear continues to retreat into the small grassy hill with its head down.

The bear appears to want to turn around to make its way out of the situation but is afraid to give his back to the dog. The dog stays on the shoulder of the road as it continues telling the bear that this is not a place for it.

Something behind the camera calls for the dog’s attention and the Great Pyrenees looks over to apparently take orders from its owners.

A human hand can be seen waving upward toward the bear as the bear makes its way back into the trees. The video is only 15 seconds long and cuts immediately after the bear is seen retreating.

If you ever encounter a bear, having a guard dog like the Great Pyrenees with you can absolutely keep you safe. This dog’s natural instinct is to protect the members of its family. From the moment it spotted the bear to the moment the bear retreated; this guardian dog was not going to let up.

Up next, check out other unusual bear encounters that’ll leave your jaw open: 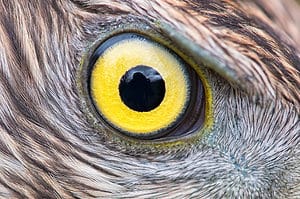