Written by Hannah Ward
Updated: May 23, 2022
Share this post on:
More Great Content:
What’s a Baby Goat Called + 4…
Lamb vs Goat: 5 Key Differences
Discover the 10 Largest Goats in the…
What Do Goats Eat?
Goat Lifespan: How Long Do Goats Live?
10 Goat Breeds: The Different Types of…

From playful and curious goats to cute and cuddly lambs, you could easily be forgiven for mistaking sheep and goats for one another.  After all, on the surface they’re quite similar – especially when they’re seen out in the fields from a distance.  But just how alike are they?

Well, despite being from the same family group they’re actually very different animals.  Sheep and goats have completely different eating habits and different natures, and even different coats.  But that’s not all, as there’s much, much more to discover about these wonderful animals.  Read on as we learn all about the key differences between sheep and goats.

Sheep and goats can easily be mistaken for one another at first glance.  However, there are several ways that they are different and a few of them are pretty easy to spot.

The 6 Key Differences Between Goats and Sheep

One of the most distinctive differences between sheep and goats is their coat type.  Most sheep have thick wool coats and need to be sheared every year to prevent them from overheating during the summer months.  Goats have hair on their bodies and don’t need to be sheared.

An easy way to spot the difference between goats and sheep is to look at their tails.  Goats have short tails that are usually pointing upwards unless they are scared or ill.  On the contrary, sheep have tails that point downwards.  Most sheep are born with long tails that are docked at birth for sanitary reasons and to help prevent “fly strike”.  Long tails often get covered in faeces which attracts flies.  Fly strike is then caused when blowflies lay their eggs on the back of the sheep.  The eggs then hatch into maggots which then feed on the sheep and can prove fatal.  However, some sheep breeds have naturally short tails, but even those point downwards.

If you’ve ever come across goats before they you’ll have heard that they have a liking for eating pretty much anything they come across (and often even things they’re not supposed to eat).  The reason for that is because they are browsers and roam around nibbling and picking at whatever takes their fancy.  Goats prefer to eat leaves, twigs, and shrubs and often stand up on their hind legs to reach the tops of plants.  However, coupled with their curious and inquisitive nature, their liking for anything they can get in their mouths often gives them a bad name.

On the other hand, sheep are grazers and prefer to eat from near the ground as they graze while they wander around.  Sheep usually eat short grasses and clover and largely ignore trees and shrubs.

Sheep are best known for their relatively aloof and distant behaviour and their strong flocking instinct.  When they are under threat or weathering a storm they will naturally flock together into a group and can quickly become distressed when separated from others.

Despite their cute and innocent appearance, goats have a knack for finding trouble – and a way out!  They have an extremely independent and curious nature and often like to go and investigate things.  Goats are extremely agile and are well known for their ability to jump or climb things and it takes good fencing to keep them in.

Most sheep (although not all) are naturally “polled” which means they don’t have horns.  However, of those that do, their horns are usually thick and curl round impressively at the side of their heads.  Many goats have horns and their horns are much narrower and shorter.  They also usually point more upwards and back and don’t curl round.

Sheep have noticeable tear ducts underneath their eyes and scent glands between the toes on their feet while goats do not.  Instead, goats have a scent gland underneath their tails.  This scent gland is what causes male goats to have such a strong and offensive smell during mating season while male sheep don’t smell as much.

Are sheep and goats from the same family?

Yes, both sheep and goats are from the same family group Bovidae and subfamily Caprinae.  However, they split at genus level.  Sheep belong to the genus Ovis and goats belong to Capra.

Can sheep and goats live together?

Yes, sheep and goats can live together.

Do sheep and goats grow beards?

Sheep don’t grow beards, but the majority of goats do.  Male goats often have longer and thicker beards than females.

Do sheep and goats have the same lifespan?

Are sheep and goats the same size?

There can be a vast variety of sizes in both sheep and goats, but generally to look at goats appear to be slimmer than sheep.  As well as being because of their woolly coats, sheep process their food differently to goats and so generally put more weight on across their loins and backs than goats do.

Do male goats and male sheep fight the same way? 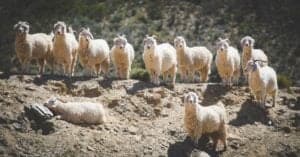