DPS/Shutterstock.com
Share this post on:
More Great Content:
An Absolutely Gigantic Moose Makes These Grizzlies…
See The Footage of The Rarest Bear…
Silverback Gorillas vs Grizzly Bears: Who Would…
Watch a Grizzly Drag a Moose Calf…
5 Massive Bears Larger Than a Grizzly
Black Bear Population by State

Grizzly bears are large, ferocious members of the Ursus family, which are native to North America. Where will you find these big bears? Here is your guide to the grizzly bear population by state.

The grizzly bear (Ursus arctos horribilis) is also known as the North American brown bear. It is a large bear that is native to North America. The grizzly is known for its large size and aggressive behavior. In terms of size, a male grizzly stands over 3 feet tall and can weigh more than 500 pounds.

Unlike the black bear, the grizzly is not shy around humans. Although a grizzly won’t go out of its way to attack humans, it can be dangerous to meet one in the wild. In March 2022, a hiker in Montana was killed by grizzlies. Since 2020, eight people have been killed by grizzlies in the Yellowstone region. Conservationists believe that attacks have increased because more people have moved into rural areas near bear habitats.

Where do grizzlies live?

Although they were once widespread throughout most of the western range of the United States, grizzlies now live in just a few northwestern regions. Like black bears, they were hunted almost to extinction in some areas, and they are still threatened by habitat loss. Grizzlies are protected under the Endangered Species Act and many state wildlife protection laws.

Conservationists note that the grizzlies living in the U.S. are thriving. They have regular breeding rates, and their populations appear to be increasing. Conservation efforts have increased grizzly populations in all these states, and grizzlies have set up breeding populations beyond their conservation areas.

Until 2016, there were six ecosystems set aside for grizzlies in the United States:

In 2016, the Greater Yellowstone area was delisted because bear populations were stable there.

What do grizzly bears eat?

Like all bears, they are omnivores who eat what is readily available in their environment. Grizzlies eat up to 90 pounds of food a day. They have an extremely varied diet that can include:

There are an estimated 55,000 grizzly bears in North America. In the United States, that population is limited to Alaska, Idaho, Montana, Washington, and Wyoming. There are about 21,000 grizzlies in Canada.

Please note that tracking wildlife populations is not an exact science. This is especially the case when estimating populations of animals with extensive ranges, like bears. It’s also important to note that some bear populations involve several states, for instance, many bears live in or near Yellowstone National Park, which extends across Idaho, Wyoming, and Montana.

For our population numbers, we relied on official numbers from each state’s Department of Fish and Game, Department of Natural Resources, or another source.

Alaska is rightly known as bear country. It is the only state in the country where all three species of North American bears live. Besides its thriving populations of grizzlies and black bears, it is also home to polar bears. Alaska is also home to Kodiak bears, which are a subspecies of brown bears endemic to the Kodiak Archipelago.

With its rugged forests and unspoiled tracts of land, it’s natural that Alaska would be home to many grizzlies. The state has an estimated 30,000 grizzlies. It is home to 98% of the U.S. population of brown bears and 70% of the entire North American population.

Because of this, the state Department of Fish and Game says, “Alaska has a special responsibility to this magnificent animal.” The state has set aside conservation areas for the bears and issues a limited number of bear hunting licenses to control bear populations. Alaska is the only state where brown bears are not considered endangered.

Grizzlies once lived all over the state, but now there are only a few who live in the northern and eastern parts of the state. Two conservation areas are home to about 40 bears. They have special conservation areas close to Yellowstone National Park. Idaho classes grizzlies as a threatened species. It is illegal to hunt, take, or own them.

In 2016, the Greater Yellowstone Ecosystem Population was removed from the threatened list because brown bears are thriving in that zone. They now have a healthy breeding population in that ecosystem, which includes Idaho and Wyoming. Grizzlies also live in the Bitterroot Ecosystem Recovery Zone and the Selkirk Mountains of northern Idaho.

Montana has an estimated 1,800 to 2,000 brown bears. Most bears in the state are part of the Northern Continental Divide Ecosystem.

Montana’s Fish and Game Department says the state has been at the forefront of grizzly bear protection and recovery. Montana abolished baiting and the use of dogs to hunt bears in 1921, listed bears as a managed hunting species in 1923, and outlawed the killing of cubs or females with cubs in 1947. In 1983, Montana chose the grizzly as its official state animal. Today, the state is home to more brown bears than any state except Alaska.

Like many other states, Washington once had an abundant brown bear population. Conservation efforts have focused on protecting the small number of remaining bears .
Washington’s grizzly bears are spread among five conservation areas: the Selkirk Mountain Ecosystem, Northern Continental Divide, Cabinet-Yaak, North Cascades, and Bitterroot. The bears are protected by state wildlife laws.

Wyoming is home to around 600 bears. Some of these bears live in Yellowstone National Park, which is largely located in Wyoming. The grizzly population of the Greater Yellowstone Ecosystem has gone from 136 bears in 1975 to an estimated 730 bears today. The number of females having cubs has remained stable since 1996, which means the bears may be at the right capacity for the park.

Here is a Summary of the Grizzly Bear Population by State:

Which state has the most grizzly bears?

Alaska has the most grizzlies by far. It has 30,000 and is the only state where they are not listed as endangered.

Why are there so few grizzlies in other states?

The main reasons are hunting and habitat loss. Grizzly bear populations were hunted to extinction in many states, and recovery has been difficult. Black bears were also hunted to near extinction, but their reintroduction has been successful in many parts of their former range. It isn’t clear why grizzly populations have struggled, but conservationists have some theories. Grizzly bears have stricter requirements for their habitats than the more adaptable brown bears. They also reproduce slowly and have only one to four cubs each year.

They can be dangerous. They won’t go out of their way to attack humans, but there are documented cases of grizzly bears attacking hikers and other people who wander into their territory. 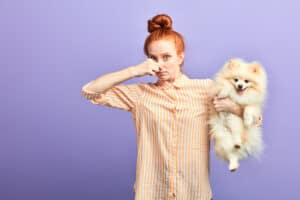