Grizzly, Shocked By Reflection, Shows The Mirror Who is Boss

Written by Kirstin Opal
Published: September 10, 2022
© 590795564/Shutterstock.com
Share this post on:
More Great Content:
An Absolutely Gigantic Moose Makes These Grizzlies…
See The Footage of The Rarest Bear…
Silverback Gorillas vs Grizzly Bears: Who Would…
Why Did Cave Bears Go Extinct?
5 Massive Bears Larger Than a Grizzly
Watch a Grizzly Drag a Moose Calf…

There’s a mirror located on a post in the middle of the woods. Yes, it’s as strange as it sounds. A gorgeous grizzly bear is mosying around, minding his own business when all of a sudden he gets a glimpse of the mirror. Being a wild animal, his natural instinct is to assume his reflection is actually another bear.

He instantly attacks the mirror and even jumps behind it! Wondering where the other “bear” escaped so quickly, our spooked four-legged friend gets back on the trail. This one results in him getting startled once more by his reflection, leaving him to show the mirror who’s the boss.

In just a matter of seconds, the mirror is on the ground and the bear feels on top of the world. We hope the superstition of breaking mirrors is just that, a superstition. Since they are an apex predator, bears are at the top of the food chain.

What Do Grizzly Bears Fear?

Grizzly bears aren’t scared of much. Loud noises and pets may scare away a hungry bear. A rabid bear could be drawn to pets, noise, or even just your odor. Judging by the video below, I think it’s safe to say bears get a little spooked from being sneaked up on.

The need to survive gives rise to panic and guttural fear. Imagine a bear coming into contact with a wolf or mountain lion. If a fight broke out, it would probably result in some level of injury to both sides and might even result in death. An animal that is already trying to survive does not want to do this. Attacking another big animal requires a lot of energy, and a wounded animal is more exposed to predators. This can even refer to other bears for bears.

Although humans have just recently been added to their list of fears, what exactly makes bears afraid of people? Since an upright human and a standing bear don’t appear all that different from one another, smaller or female bears may perceive this as a threat, which is one of the main causes of bear fear of humans.

Other factors include human invasion and encroachment on their region, as well as human social behavior and noise levels. Maybe some campers wanted to ensure their hiking outfit looked great or perhaps a park put the mirror in place as an experiment. Either way, this footage is something out of this world! 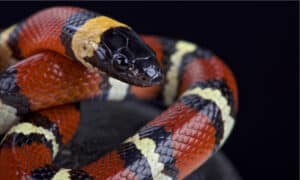