Written by August Croft
Updated: November 4, 2022
© iStock.com/flySnow
Share this post on:
More Great Content:
Chipmunk Droppings: How To Tell If You're…
Chipmunk vs Squirrel: 7 Main Differences Explained
Chipmunk Holes: How To Identify & Fill…
Chipmunk Lifespan: How Long Do Chipmunks Live?
Chipmunk Sounds: How To Identify A Chipmunk…
What Do Chipmunks Eat?
↓ Continue Reading To See This Amazing Video

Both ground squirrels vs chipmunks are members of the same species, which is Sciuridae. However, just because they are related in this way does not make them the same. In fact, there are many key differences that you can use to both tell them apart and get to know them as individuals.

In this article, we will go over all of these key differences, including their physical differences, habitats preferences, and more. You should be able to identify a ground squirrel or a chipmunk with ease, as well as understand some of their individual behaviors.

Let’s get started and learn about these two rodents now!

The Main Differences Between Ground Squirrel vs Chipmunk

Chipmunks often live underground in burrows and tunnels, while squirrels are usually found above ground in trees and in grasslands. Finally, the life spans between chipmunks vs ground squirrels is inherently different, mostly based on their individual mobility.

Now that you have a brief overview of the differences between these two, let’s go over them in more detail now.

One of the key differences when it comes to telling ground squirrels and chipmunks apart lies in their overall size and weight. Ground squirrels are significantly larger in both length and weight when compared to chipmunks. Let’s discuss these statistics in more detail now.

Another difference between ground squirrels vs chipmunks is their appearance. While these two rodents can look strikingly similar, especially because they are from the same family, there are some key differences to pay attention to.

Chipmunks and ground squirrels live in different habitats and environments, especially throughout the day. This is another difference between them that becomes more obvious as you study these to rodents as individuals. Let’s talk more about this now.

For example, ground squirrels are often seen roaming parks, woodlands, and scaling tall trees, while chipmunks are usually found scurrying along the ground. This is because chipmunks reside in burrows and tunnels underground and tend to stick to those locations except for when they need to venture forth for food.

Another potential difference between chipmunk vs ground squirrel is their life spans. Many studies show that ground squirrels live far longer than chipmunks do, and it is likely based on their overall mobility and athleticism. Let’s talk more about what that means.

Ground squirrels are capable of climbing trees and running away at high speeds, while chipmunks often can’t reach protection in time.

The final key difference between chipmunk vs ground squirrel lies in their hibernation habits. While there are very few animals that truly hibernate, ground squirrels are one of them, while chipmunks do a version of hibernating that is more common among the animals.

For example, chipmunks retreat to their dens in the winter months, but they wake up every few days in order to eat and then they return to sleep. Ground squirrels have the ability to truly hibernate without eating, but they often do a similar routine as chipmunks do during the winter. 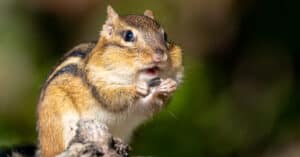 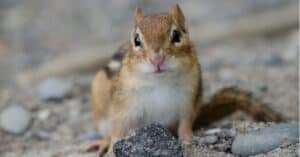 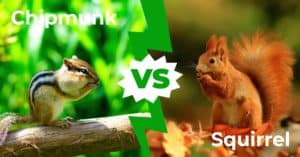 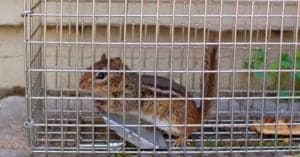 Pet Chipmunks: Is It A Good Idea? 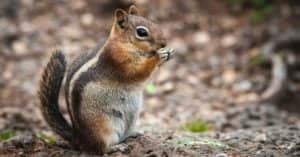 Chipmunk Sounds: How To Identify A Chipmunk By Sound