The Sam Fire is a wildfire that burned almost 150 acres of grass and brush in Los Angeles County in early August 2022. Luckily, there were no injuries, deaths, or damages to structures. KTLA news is an organization that covers everything Southern California-related. They’ve been keeping locals apprised of news since 1947.

They were on the scene the day of the event with incredible helicopter views. What you’re about to watch is a fiery tornado forming as part of the wildfire that would baffle anyone without previous fire knowledge. However, a researcher for the National Weather Service in Missoula named David W. Goens is responsible for defining fire whirls.

A fire tornado usually ranges somewhere between 100 and 1,000 feet in diameter. The rotational velocity of a fire tornado reaches a shocking 90 miles per hour. You can just imagine the kind of damage an event like this can cause!

The video starts with an aerial view of the Sam Fire. You can see how it’s spreading with smoke and char against the green grass and shrubs. The center glows orange and thick, with grey smoke covering the sky. Off to the right, you can see an unusual fire formation and the KTLA chopper’s cameraman immediately starts zooming in.

“Look at that. Wow,” you can hear a reporter say as the camera captures this incredible scene. In the center, the fire spins into a whirl, pulling in the glowing flames surrounding it. You see, as it kicks up debris the way a tornado would as it continues gaining velocity.

The reporter is left speechless. He starts a sentence with “It…” but trails off, knowing he’s witnessing a true marvel of nature. All he’s able to utter for a few moments is the word, “Wow.”

“This is the biggest one I’ve ever seen,” he says finally, as the fire tornado keeps pulling in the glowing flames to create a massive whirl. Just then, an aerial firefighter flies by, dropping water on the enormous flames. The helicopter bucket dumps close to 700 gallons onto the ‘firenado’ and manages to extinguish the raging blaze.

Just as the flames from the fire tornado calm and turn to dark ash, the video comes to an end.

Up Next: Learn More About Wildfires

Discover the Deepest Lake in Kentucky 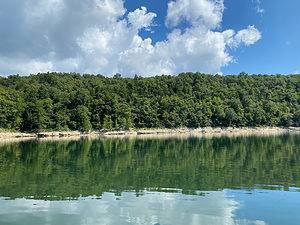