Alligators are large, predatory reptiles. They tend to be a little lazy, going after small prey and not pursuing larger game. This is why alligator attacks are pretty rare!

However, an alligator might chase or bite a person if they are scared, territorial, or protecting their nests. Most alligator attacks happen past dusk at or near the water’s edge. May through September are prime times as well because this is when alligators mate and reproduce.

It’s best to avoid alligators whenever possible and keep your distance from them.

In this article, we’ll discuss how fast alligators run and swim, whether they chase people, and what to do if an alligator is chasing you!

Alligators can run up to 30 miles per hour, but there are considerable caveats behind this number. For one, this is only in extremely short bursts. Essentially, in very short spaces of movement, alligators can accelerate very quickly. That is to say, if you’re within 10 feet of an alligator, they can be extremely fast and dangerous.

Which leads us to another question of what an alligators’ speed over distances beyond a body length? The answer is that alligators can run somewhere between 9.5 and 11 miles per hour. However, even that figure has caveats as alligators will rarely exert themselves for more than 100 feet. They’re sedentary creatures that have adapted to have very quick and powerful movements when prey comes near them and are generally not active hunters that chase down prey.

In cold weather, alligators will even brumate, which is a type of hibernation in which their bodies slow down to survive the chilly temperatures.

You may see an alligator in the water with their head or snout poking out, allowing themselves to breathe as they sit still beneath the surface. When alligators need to move, however, all of that conserved energy serves them well.

Alligator Speed on Land Vs. Water

On land, an alligator’s top speed in very short bursts can reach 30 miles per hour. When swimming, however, they’re a little slower—topping out at 20 miles per hour. This is still much faster than a human swimmer. We average out at only 2 miles per hour!

Just keep in mind once again, however, that alligators are not generally active predators. They’ll generally swim at much lower speeds than their maximum speed and conserve energy.

Alligators may chase people either in the water or on land. However, it isn’t super common, and most alligator attacks happen near shorelines.

Just beware being too close, they pack an incredible bite force of over 2,000 pounds per square inch!

It’s never worth the risk to mess with an alligator or swim near them. Avoid swimming, wading, or walking nearby waters where alligators live or swim, especially at dusk—their most active time of day.

Most alligator attacks happen when:

How Long can an Alligator Stay out of Water?

Alligators can remain out of water for as long as they like. They aren’t aquatic animals. Although they spend much of their time in the water, they breathe air.

Roaming far from the water’s surface is rare for alligators, though. This is why most attacks happen either in the water or at the shoreline.

The main threat is alligators’ speed in short distances. Simply put, unless you approach an alligator or don’t see one nearby, they generally pose little risk. Most fatal alligator attacks have come from people nearing the water’s edge in alligator-heavy areas or engaging in activities like snorkeling.

Can a Human Outrun an Alligator?

The bottom line is that most humans can outrun an alligator. While the “headline” of 30 miles per hour would be faster than any human (the fastest human ever recorded ran at a top speed of 27 miles per hour), remember that the top speed is more of a lunge that’s a very short distance.

Over a span of 100 feet, an alligator would top out at about 10 miles per hour. While this can be faster than many humans are capable of, alligators generally aren’t looking to chase larger prey.

What to do if an Alligator is Chasing You

If you are ever near an alligator, back away from them slowly. They are most likely going to be afraid of you and will try to retreat.

Rarely, an alligator will chase or attack a human instead. This sometimes happens if a mother is protecting her nest, a male is looking for a mate, or the alligator is hunting or otherwise desperate for food.

If an alligator chases you, run as quickly as you can in a straight line—don’t zigzag, as this won’t help and can slow you down.

If the alligator bites you, the best thing to do is to fight back and make a lot of noise. People nearby can also help by making a racket in hopes that the alligator is scared away.

Aim for the alligator’s eyes or face, as this might make them release you.

An alligator kills its prey by rolling it beneath the water until it drowns. You want to fight this as hard as possible, and not let the gator pull you under if you can help it.

Once you escape an alligator attack, seek medical help. All animal bites can become infected easily, especially one from such a large, strong animal. 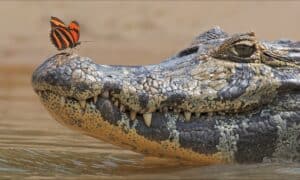 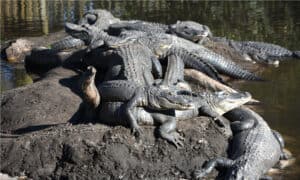