How Long Will Your Dog Stay In Heat?

A female dog will start to experience being in heat, or estrus cycle, when she reaches puberty. This happens around six months old, although the period depends on the dog’s breed. From about six months throughout the rest of her life, the female dog will be in heat twice a year. This is when she’s receptive to mating and the time breeders wait to know the dog is ready for pregnancy.

Taking care of a female dog means dealing with blood when she is in heat. Vaginal bleeding is the most recognizable sign that dogs are in heat. However, this is not apparent until a few days after they come into estrus. Remember that some female dogs bleed heavily, while some have minimal bleeding. If your female dog suddenly has abnormal heavy bleeding, it is time to call your veterinarian.

A dog stays in heat between one and a half weeks to two weeks, although the time when they are in heat or can be pregnant will only last for about seven days. Being in heat means the dogs are in estrus cycle. This is the time when they can mate and become pregnant. However, there is no assurance that mating will always lead to pregnancy, so breeders must be extra careful with their assumptions and expectations.

When Does It Start?

Puberty for female dogs varies by breed and size. Smaller breeds can go into heat as young as four months old, although the average among small and large breeds remains at six months old. Larger breeds like Labradors and Golden Retrievers may not go into their first heat until they are 18 to 24 months old.

Remember that when the heat starts, that does not necessarily mean the female dogs are ready for breeding. Don’t breed young female dogs during their first and second cycles because their eggs are not mature enough. Wait until the third cycle, when the dog is fully mature. If you are unsure when to start breeding, the veterinarian can guide you.

What Are the Signs of Estrus?

The real first sign of estrus is the swelling of the vulva. However, it’s not like dog owners check their dogs’ vulva every day. So, the first noticeable sign that your female dog is in heat is vaginal bleeding. The bleeding doesn’t usually start on the first day of the cycle. The vulva could be engorged for days before the bleeding begins. 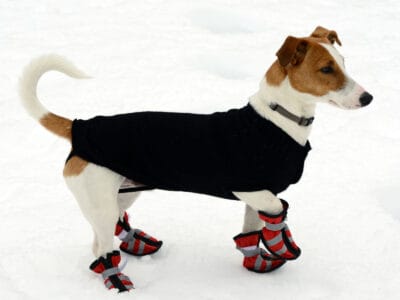 The Best Dog Shoes For Winter for 2022—Reviewed and Ranked 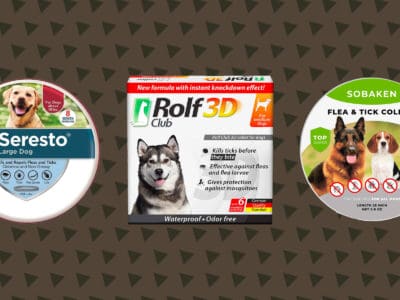 The first discharge will be very bloody. As days pass, the blood starts to be watery and pinkish-red in color. Another sign of a female dog in heat is frequent urination and marking territory. The latter is when the dog urinates a small amount of urine on various objects while at home or out on a walk. The urine of a dog in heat contains pheromones and hormones. For this reason, male dogs know where a female dog in heat is.

How Long Does Each Cycle Last?

The cycle usually lasts between two to four weeks, but it doesn’t mean she’s fertile throughout this period. Some days, she may not be receptive at all to male dogs, although some are welcoming during the entire cycle.

There’s just a small window when the female dog is most fertile. There’s no easy way to know it, but expert breeders said it’s about nine or 10 days into the cycle. The heat lasts about five days, so these are the days when it’s more likely for the female dog to get pregnant. But, yes, she can get pregnant until the end of the cycle.

The cycle can be shorter depending on the type and breed of the dog. Owners will know that the cycle is over when the dog’s vulva returns to normal and when the bleeding stops. There should also be no other vaginal discharge.

Does the Cycle Repeat All Throughout the Dog’s Life?

Yes, the cycle will happen until the dog dies. There is no menopausal stage for female dogs, though the time between cycles will be longer once they are older. The estrus takes time to be regular, so don’t expect your dogs to enter the cycle every six months when they are younger. That time period is for older dogs.

During the early years of the female dog’s life, record when she starts to bleed and how long it lasts. This information will come in handy when you want to breed. The veterinarian can detect many complications by looking at your record book. Smaller breeds may go into heat about three to four times a year, while larger breeds will only go into heat once every 12 or 18 months.

The average cycle for dogs to get in heat is every six months. This will happen to them during their entire life. Some dog owners choose to spay their female dogs before their first cycle, though this is not advisable if you want to breed.

How to Make a Dog in Heat More Comfortable

It is uncomfortable for dogs to be in heat. They are literally bleeding from their vaginas, but other male dogs are also lining up to them. As an owner, it could be annoying too. But imagine how uncomfortable your dog is. This period will last just two weeks max, so help make this time as comfortable as possible by giving more attention to her diet, health, and activities.

Put on a Diaper

One of the things you can do is put a diaper on her. This will keep your house clean, too, and make her feel protected. Don’t forget to change the diaper once it is complete, and don’t let her bleed all over her sleeping mat. There are different styles and sizes of dog diapers, so you only need to pick the best one for your dog.

Take Her Out for Walks

Female dogs in heat are known to be a bit aggressive. One way to reduce this aggressiveness is to tire her out. You need to take her for long walks or a run. Just make sure she’s wearing her diapers. But as not to exhaust her, take her for multiple short walks and keep her under close supervision when outside your home.

This is uncomfortable both for the dog and the owner. To remove the odor, use an odor-control shampoo, which you can get online or in-store. Giving her more frequent baths when she is in heat will also help take the odor out. If you usually give her a bath once a week, try to increase this to twice a week. It will help keep that fishy odor out of your house.

Dog owners use two other methods: add liquid chlorophyll to the dog’s bathwater and put Vicks VapoRub at the base of her tail. If you’re going for the latter, ensure that she cannot lick it off and that the ointment won’t reach her genitals.

Give Her Extra Cuddle Time

Female dogs become irritable when they are in heat. They don’t understand what is happening to their bodies. This will be for a few days only, but what you can do is ensure that she will feel loved. Spending extra time to cuddle with her will be a joy. She will be comforted by your presence.

Other things you can do is just lie around and watch television, give her head a massage, brush her fur, and even talk to her. Use a soothing voice to assure her that she’ll be fine.

Some treats are designed to calm anxious dogs. Store these treats so that you have something to give your female dogs during their cycle. These treats will not make them feel drowsy, so don’t worry about it. The only point of giving them these treats is to take their minds off what’s happening with their bodies.

Aside from treats, there are also specialized calming sprays for dogs. These sprays are mostly made of lavender. Do you know that there’s a shirt made to comfort female dogs in heat too? The shirts give a sensation of being hugged. This is very soothing for a dog when she is in a stressful situation.

If you are worried about your dog’s mood swings, put her on a leash. Sure, she wouldn’t like it, but it’s nothing compared to the agony if she accidentally or even intentionally hurts someone. Some dogs tend to be super aggressive when they are in the cycle. They shouldn’t be mixed with strangers, and you should get them as far away from children as possible.

Many dogs lose their appetite when they are in heat. Consider giving them their favorite and some treats. You can even feed your dog with baby food if it doesn’t contain garlic and onion. Special dog foods are packed with needed nutrients and minerals for the dog in heat.

Some dog owners choose to spay their female dogs for health reasons and because it is hard to take care of them during the estrus cycle. But remember that the cycle happens only once to twice a year. Should that be a reason why you will take her opportunity to breed away? Female dogs in heat are not hard to take care of. There are plenty of treats, foods, and activities to make her feel comfortable. These simple gestures will ensure they are loved, which will then shoo their anxieties away.