When this video starts, it looks like the crocodile is done for. There are spectators on safari and they’re capturing a unique sight. A lion has grabbed a croc from behind and begins biting down on its neck. The crocodile opens it mouth and points upward as the lion wrestles it down to the ground. Surrounded by three young lions, the lion pulls the croc down and bites at its body. You can hear its menacing growls but it’s unclear if he is trying to feast on the croc or is just playing a ferocious game with it.

“I’m sorry, croc-y,” you can hear a woman say behind the camera. Even though a croc wouldn’t hesitate to attack as needed, there is still some sense of sympathy watching a lion attack one. Although lions don’t typically eat crocodiless unless the food is scarce in their environment, they won’t hesitate to if they need to. As the video continues, it seems like the crocodile’s fate is set. You can see a couple of puncture wounds on its head, and it does attempt to curve its body back to try and latch onto the lion that is attacking it.

Unfortunately for the crocodile, it is unable to turn its body around enough to get a good latch onto the lion. The video cuts and the croc is on the ground in front of the three younger lions. The lion is still behind it, but the croc has managed to keep fighting for its life. As if bored with a toy, the lion loses interest. The younger lions continue pawing at it, seemingly half curious and half scared.

The crocodile starts moving away from the lions and toward the water. It moves incredibly slowly, but every time a lion approaches, it defends itself, its mouth opening up threateningly. It lets out both hisses and growls as it turns back toward the lions in defense. The larger lion does seem to show some interest toward the end of the video again and pulls the croc a few times by its back left leg. Eventually, however, the crocodile is able to descend into the water and make its way back to safety. Although the razor-sharp teeth and claws of the lion have certainly wounded it, it manages to live another day.

Up Next, Watch How Lions Exert Their Dominance in the Wild… 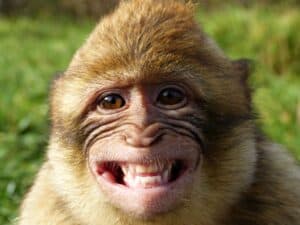