Baja California is a hotspot for whale watching—during certain seasons like late winter and early spring, you can spot a variety of different whales, including blue, fin, sperm, and of course, orcas.

Orcas are also known as killer whales and have very distinctive black and white patterned bodies. You hear the word “whale” and may think that they’re completely different from the dolphins that approach shore on many beaches, bobbing in and out of the water in pairs but orcas are part of the dolphin species.

They’re just the largest ones! And they are prevalent—wherever you are in the world, know that orcas are living in every ocean.

Paddleboarding with Orcas in Baja California

This video occurs in Baja California where a woman is out paddleboarding. It opens with an aerial view of an orca swimming in the beautiful blue-green water, coming up toward the surface with a second orca, and then diving down underwater, their forms barely visible the deeper they go.

They seem to be leisurely enjoying their day, their tail fins flapping on the surface, creating large splashes.

The camera angle shifts a bit to capture a woman approaching on a paddleboard. She’s aware of the orcas and the drone filming and waves as if greeting old friends. She’s in a pink summer dress with her hair tied up in a bun, and she exudes a knowing calm as the orcas swim and breach around her, travel underneath her paddleboard, and circle her multiple times.

It’s like a private orca show just for her and she steadily stops to appreciate it for a few moments. She starts paddling again and the orcas continue their show around her, returning her friendly vibes. Unfazed, the woman continues paddling and she and the orcas enjoy a fun outing together.

Suddenly, a third, smaller orca, appears as the woman heads back to shore. While most people may have been intimidated or felt frozen at that moment, this woman handled this encounter with ease and grace.

In the description, you learn that “these are two adult females teaching their young how to harvest cownose rays.” It then goes on to explain that this woman has lived in the area for over a decade, which is why she knew not to panic and simply respect their space.

Orcas are often called killer whales, but they almost never attack humans. In fact, there is no record of an orca ever killing a human in the wild. They would much rather eat penguins, seals, and squid.

Orcas were first given the name killer whale when they were observed hunting in groups and exhibiting the knack for strategizing, which takes high intelligence. Orcas live in large pods and are very social creatures. The males stay with their mothers for life and the females only separate from the pod briefly to have their own offspring, before rejoining the group.

Orcas have exceptionally long dorsal fins making them one of the fastest marine mammals. They can swim up to 34 miles per hour!

Deer Meat: 10 Things You Should Know About Venison 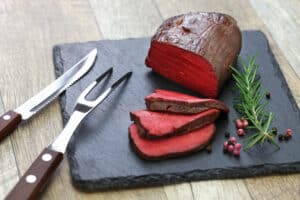