Peter Fodor/Shutterstock.com
Share this post on:
More Great Content:
Elephant Lifespan: How Long Do Elephants Live?
Meet The Gigantic Ancient Elephant With FOUR…
What's a Baby Elephant Called & 9…
Mammoth vs. Elephant: What's the Difference?
What Is A Group Of Elephants Called?
12 of the Oldest Elephants Ever Recorded

Most experts recognize three species of elephants: two from Africa and the Asian elephant. But which one is the biggest of the three?

And just how big is the world’s largest ever recorded elephant?

There are some distinguishing features between different species of elephants. Three notable things are size, ear shape, and tusks. Elephants will use their tusks for digging, lifting, gathering food, and defense. In the same way, humans are right or left-handed, elephants have a dominant side. You can tell this by looking at the tusks. The dominant side will show wear in the tusk.

Elephants are vegetarians. Their diet consists of grasses, fruits, leaves, bark, and roots. They consume food 16-18 hours every day, eating 300-350 pounds of food. The female elephant has one calf every four to five years. The calf will stay with the herd for many years, being cared for by the entire herd. Females will continue to stay with the herd into adulthood, but the male calves will leave the herd when they reach puberty.

As a highly intelligent species, elephants can problem solve and show emotions such as empathy and mourning. They will take care of others in their herd, care for the young and the weak or injured, protect them, and nurture them back to health. When meeting elephants from other herds, they will greet one another by using their trunks by holding them up high or inserting them into each other’s mouths as a greeting.

The adult Asian elephant grows between 6.6 and 9.8 feet tall, weighs in at 4,500 to 11,000 pounds, and will live up to 60 years. These elephants have smaller and round ears with one finger-like part to help them pick things up. Male elephants grow tusks that are usually large, although some male tusks are much smaller. The smaller tusks are called tushes and are not always seen outside the mouth. Asian female elephants do not grow tusks.

Elephants travel in matriarchal herds. They usually have six or seven females, with the eldest leading the herd. They can communicate up to 2 miles by making low-pitched sounds. As a highly social species, elephants will sometimes meet up with other herds. The matriarch or eldest female in the herd is in charge of remembering the best places for food, water, and shelter. She will also teach the younger elephants in the herd how to socialize.

As herbivores, their favorite foods are bananas, rice, and sugarcane and grazing on grass and trees. They will always be near a water source.

In Asian culture, the elephant is considered an important cultural icon. There are less than 50,000 Asian elephants in existence and three subspecies of Asian elephants. These are Indian, Sumatran, and Sri Lankan.

The Sumatran elephant typically has brighter skin with fewer de-pigmented spots. Male elephants of the Sumatran subspecies grow shorter tusks, and the female tusks are barely visible. They live on the Sumatra Island of Indonesia.

Possibly the most social of the elephant species, the Sumatran elephants will form herds of 20-35 elephants. Like the other elephant species, the males will leave the herd upon puberty while the females continue to stay with the herd. The young females will then take on a nanny role for the younger elephants. Communication is essential. The elephants will keep in contact to protect the integrity of their herd.

The Indian elephant lives in the grassland, dry deciduous forest, moist deciduous forest, and evergreen and semi-evergreen forest of Asia, moving around frequently. They do not like to stay in one place for more than a day or two.

Nonterritorial, they travel in herds of up to 20 elephants. Unlike some of the other species of elephants, males will join the herds.

Human activities and agricultural development have limited these elephants from previous seasonal migration habits. Some have been known to raid farms, settlements, and plantations that were in their original range.

The Indian elephant has been semi-domesticated and is used in logging camps and the tourist industry. In the past, they were used as animals of war.

Human development has limited the migration habits of the elephant. They are found on the Island of Sri Lanka around the open grasslands, forested regions, open savannas, marshes, and lakeshores.

The adult African elephant grows between 8.2 and 13 feet tall, weighs in at 5,000 to 14,000 pounds, and will live up to 70 years. Larger ears, much like the shape of the continent they inhabit, are distinguishing features of the African elephant. Males and females grow large tusks with two finger-like parts that help them pick up things.

The African elephant is the larger than its Asian counterparts; it is the largest animal on earth. Dwelling in Africa, these elephants find their homes in 37 countries. They use their trunks and tusks for communication and to handle objects. The large ears are used to radiate excess heat. Their tusks will grow their entire lifespan.

African elephants also travel in herds. Mothers and their young will stay together for many years in a herd. The males will stay in loosely connected relationships at best. They prefer a solitary lifestyle. The African elephants are considered a threatened species due to fewer poachers seeking their ivory tusks and diminished food sources. There are currently between 400,000-500,000 African elephants in existence.

There are two species of African elephants: the savanna, or bush elephant, and the forest elephant.

The Forest subspecies of the African elephant are the smaller of the two subspecies. They have slightly smaller, oval-shaped, and their tusks are straighter, pointing downward. Maxing out at 8-10 feet and 2-5 tons, this elephant makes its home in the dense forests of Gabon, the Democratic Republic of Congo (DRC), Cameroon, and the Central African Republic in central Africa and Côte d’Ivoire, Liberia, and Ghana in West Africa.

This subspecies is considered critically endangered, having 60% of the population lost to poachers seeking their ivory tusks in the last ten years. It is difficult for the species to reproduce at a fast enough rate to compensate for this population loss because they don’t reach sexual maturity until they are 23 years old. It also takes approximately two years for gestation. Experts say it would take over 80 years to recoup the 60% loss, assuming the poaching stopped now.

The larger of the two species of African elephants is the savanna elephant. Their larger ears and their legs distinguish them. The front legs of a Savanna elephant are longer than their back legs. The Savanna elephant calls eastern and southern Africa home, specifically Botswana, Tanzania, Zimbabwe, Kenya, Namibia, Mozambique, and South Africa.

They also travel in family herds, with an average of 10 mothers and their young. The males follow along only during the mating season. Occasionally the herds will join together in larger clans of several hundred members.

The savanna elephant has 40,000-120,000 muscles and tendons in its trunk and can lift 400 pounds. They will use their trunks to lift objects or suck water into the trunk, then blow it into their mouths to drink, or blow it on their backs to cool off.

Bonus: The Largest Elephant on Record

The largest elephant ever recorded is seen by millions of tourists annually. That’s because the specimen is in the rotunda of the Smithsonian’s Museum of Natural History!

The elephant has been named “Henry” and stands 13 feet tall. He was shot in 1956 in Angola and given to the Smithsonian Institute in 1959. With a weight of 24,000 pounds, Henry is the largest elephant ever recorded. 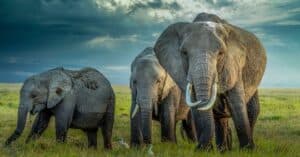 12 of the Oldest Elephants Ever Recorded

12 of the Oldest Elephants Ever Recorded