Moles are creatures that occasionally evoke industry and labor ideas in human culture. They carve an incredible network of tunnels and chambers beneath soft, damp soil with their enormous claws. The mole has a complete home, a means of defense, and a food supply in these intricate underground labyrinths. Because moles are helpless against humans and other predators, this is essential to their survival.

It has become a surprisingly effective survival technique that allows moles to thrive all over the planet. However, they are considered pests. When their tunnels cause damage to lawns and other turf areas, moles may be considered pests. Moles dig tunnels for both transportation and food storage. Although they don’t eat garden plants or bulbs, their tunneling can irritate garden plants. Texas is no stranger to moles, but how can you get rid of them? Below, we will talk about the moles lurking in Texas and how to prevent them in your yard.

Are There Moles in Texas?

There are various species of moles in the country, but only the eastern mole (Scalopus aquaticus) is present in Texas. Residents in eastern Texas are experiencing problems from gophers and moles excavating through yards. They often leave some destruction in their wake while searching for food, even contributing to erosion beneath the foundation of houses. Moles rarely and frequently come to the surface by accident as they dwell in the solitude of their underground burrows. The mole only has a small number of natural enemies because of its solitary underground existence.

Only a few plants or bulbs are directly harmed by moles. When plant roots are disturbed by animals digging into the soil in pursuit of insects, the most harm is caused. Their digging can ruin flower beds, rip grassroots, ruin lawns and parks, and wreak havoc in small garden plots.

Where Do Moles in Texas Live?

Wherever suitable soils are present, the eastern two-thirds of Texas is home to the eastern mole. Moles live nearly their entire lives underground, and their bodies have evolved to suit this environment. They favor temperate surroundings with moist or loose soil, such as lowland or alpine meadows, grasslands, floodplains, woodlands, coastal dunes, and wetlands. The mole is generally relegated to the cooler mountainous habitats in more arid regions. Their little eyes have fused-closed lids. Despite not having external ears, they have excellent hearing.

What Are the Threats of Moles in Texas Yards?

Moles damage yards in eastern Texas by looking for insects. When moles dig through tunnels, yards and plants suffer damage. While in pursuit of food, they frequently leave some destruction in their wake. They can dig easily underground because of the sandy quality of the soil in the eastern half of the state.

The tunnels can be 16 to 18 inches below ground and have a diameter of less than two inches. There are two sorts of mole routes: deep runways and subsurface roadways, and they use the visible above-ground subterranean tunnels as feeding tunnels.

How to Prevent Moles in Your Yard

The first step in permanently getting rid of these pests is knowing what draws moles to your yard in the first place, the harm they may cause, and the warning indications that they have arrived if you want to undertake your own mole management.

The underground tunnels and unattractive mole mounds moles leave behind in lawns and gardens can make them a nuisance. Mole control techniques that eliminate food supplies or make the earth uninhabitable for them can help homeowners prevent mole damage.

The greatest mole control techniques are preventative, working to thwart an infestation before the rodents even start to take over your landscape. Here are different natural cures and professional pest control methods to deter animals from digging tunnels through your landscape:

1. To keep moles at bay, establish a vertical barrier

If you have a mole infestation and a vegetable garden, there’s a chance that voles will also use the tunnels to get to your crops quickly. Therefore, dig a trench two to three feet deep all the way around to act as a barrier. Remember that while this technique works well, it is undoubtedly a difficult task for all but the smallest gardens.

The owl is one of the main predators of the mole. So, in the late winter or early spring, when owls start looking for nests, you can put an owl nesting box on your land. Your cat may also enjoy the fun of mole hunting if you have one and don’t mind having it roam your yard.

3. Get rid of food sources

Moles’ main food sources are earthworms, grubs, beetles, and insect larvae. They will seek out alternative sources of food if you take action to eradicate grubs. To get the greatest results, use an insecticide in the early spring to kill grubs. Grub and other lawn pest removal will also aid with normal lawn maintenance.

4. Reduce moisture in the soil

Since moles are driven to wet conditions to find the grubs and earthworms they eat, reducing soil moisture can help eliminate nuisance moles.

5. Use a nontoxic repellent for moles

Spray a homemade solution of three parts castor oil and one part dish soap on your grass and the openings to the mole tunnels. Moles won’t be killed by castor oil, but it will upset their digestive systems, making them seek alternative food sources.

6. Buzz them off using ultrasonic repellents

Ultrasonic equipment emits sporadic pulses that are meant to irritate moles. They might believe another mole is excavating in the same area because of the buzzing. The gadgets you bury in the ground emit electronic pulses that scare off the pests. However, occasionally the mole will grow accustomed to the noise and continue digging.

Make a trench around the edge of the area, such as a garden bed, to keep moles out. Create a trench that is three feet deep and line the bottom of the trench with rocks or wire mesh.

Signs of Moles in Your Yard

You hardly ever see a mole because they are typically buried in their tunnels. But when you step into their tunnels, they can easily collapse, putting you in danger of getting hurt. Consider the following signs to see if you have a mole problem:

The mole has a striking, unique appearance that is well-suited to its existence of underground living. They can easily dig into the dirt thanks to its large hands, short limbs, and keen claws. These enormous forepaws’ physical features, which include two thumbs on each, are amazing. The thumbs consist of one bone, in contrast to the other fingers, which have many joints. The mole’s digital arrangement appears unique, as it is not a characteristic of the distantly related shrew. The mole’s tiny, beady eyes and absence of external ear flaps are two further intriguing characteristics. Its long, flat body is coated with black or soft brown fur.

Earthworms, insects, and other small invertebrates are among the mole’s preferred foods. Moles do not consume plants, despite what many people think. They are carnivores that consume a lot of animal material. Moles will frequently and in huge quantities, prey on invertebrates and insects. Some types of amphibious moles will consume both fish and amphibians. A mole can consume up to 100% of its body weight in insects daily. In general, moles like eating earthworms. A single mole will consume tens of thousands or perhaps millions of worms throughout its lifetime.

Foxes, coyotes, weasels, snakes, hawks, and owls frequently prey on the small, vulnerable moles. The burrow is a natural barrier against most predators because moles are exposed above ground. However, this might not be enough to protect the mole from predators with excellent digging skills. 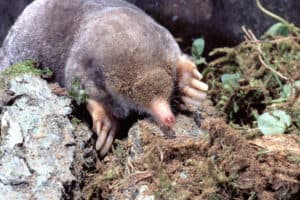