More Great Content:
Watch an Eagle Attack A Trespassing RC…
Discover the One Place on Earth that…
What Kills Bed Bugs Instantly?
Watch a Fierce Grizzly Battle Over Whale…
Is Mandevilla A Perennial Or Annual?
Are Brown Recluses in California?

Valeri Potapova/Shutterstock.com
Share this post on:
More Great Content:
Watch an Eagle Attack A Trespassing RC…
Discover the One Place on Earth that…
What Kills Bed Bugs Instantly?
Watch a Fierce Grizzly Battle Over Whale…
Is Mandevilla A Perennial Or Annual?
Are Brown Recluses in California?

When the Discovery Channel unveiled its 2021 Shark Week lineup one title stood out among the 33 shark-related specials: Ninja Sharks 2: Mutants Rising.

While the title sounds more like a comic book (Teenage Mutant Ninja Turtles, anyone?) than a serious nature documentary, Ninja Sharks 2 delivered on its promise of detailing four sharks that have mutated and evolved ‘superpowers’ that make them unique among the more than 500 shark species that have been classified today.

But What Exactly is a Ninja Shark?

If you’re browsing through Discovery’s Shark Week schedule and seeing Ninja Sharks 2, you’re sure to ask the question, “what exactly is a ninja shark?”

The title of the show is clearly not meant to be scientific. In the documentary, ‘ninja sharks’ are described as shark species that have unique ‘superpowers.’ That is to say, they’ve evolved to have special capabilities that make them unique. Specifically, the show details:

We’ll break down the details on each of these ‘ninja sharks’ below.

Thresher Sharks: A Whip for a Tail

Ninja Sharks 2 begins in the waters off New York’s Long Island, where thresher sharks congregate for two weeks during summers before descending back into the depths of the ocean.

What makes thresher sharks so interesting is that their “bionic tail” (the show’s words, not ours!) is the same length as their body. Thresher sharks can use this tail like a sword or even a whip, flinging it at 50 miles per hour and knocking fish in groups unconscious.

In Ninja Sharks 2, scientists attempt to tag a thresher shark with a camera to determine why they congregate off Long Island for just a couple of weeks during the summer. The conclusion: large “bait balls” of millions of fish congregate off nearby reefs during this time. Threshers converge on the area as their tails are tremendously effective at hunting these large schools of fish.

The show also focuses on mako sharks that are hunting near Long Island as well. What makes shortfin makos “ninja sharks?” For one they’re the fastest sharks on the planet.

Shortfin makos have a top recorded speed of 46 miles per hour. Put another way, they can burst through the water at 5 to 8 body lengths per second. Combine this speed with the mako shark’s size (up to 12 feet in length), and you can see why these sharks are such effective predators.

In fact, due to their speeding abilities, mako sharks will hunt other fish that also get up to record speeds such as sailfish and swordfish. Both sailfish and swordfish have sharp beaks which they can utilize to impale their attackers, so mako sharks don’t always come out successful. It’s common for makos to carry battle scars from fights with these fish, and in one case, a female mako was found dead with a sailfish beak protruding from her eye.

Sand Tiger Shark: A Shark that Can Hunt Motionless

Most sharks have to constantly be on the move for a simple reason, water moving through their gills is what allows sharks to breathe. In other words, for species like the great white shark, keep moving or perish!

On Ninja Sharks 2, scientists explored sand tiger sharks using this ability to “hover” in shipwrecks off the coast of North Carolina. Ships sinking off the Carolinas in World War 1 & 2 have created a long stretch of reefs clustered around sunken ships known as ‘The Graveyard of the Atlantic.’

The tight spaces of these ships aren’t ideal hunting grounds for most sharks who have a hard time navigating shipwrecks. However, since the sand tiger shark can “hover” motionlessly, they’ve become top predators in shipwrecks by ambushing fish. In addition, sand tiger sharks will often congregate in large groups. Once they’ve congregated smaller schools of fish will encircle them.

The last shark featured on Ninja Sharks 2 was the salmon shark. Salmon sharks live in the Northern Pacific, stretching from Japan over to Alaska. As their name implies, their favored prey is salmon and other large fish.

What is their ‘ninja skill’ that landed them on the show? Salmon sharks have what’s effectively a ‘superheated core’ that allows their body to stay at 60 degrees even while the surrounding water is just a couple of degrees above freezing. This warmer body temperature gives the salmon shark faster movement while they’re hunting.

Read our full article on:

The 6 Best Books About Dinosaurs Reviewed and Ranked 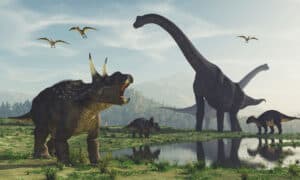 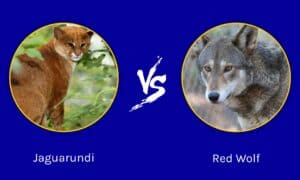