Written by Colby Maxwell
Published: February 17, 2022
© Aleksandra Saveljeva/Shutterstock.com
Share this post on:
More Great Content:
Mink vs Ferret: 5 Main Differences Explained
Mink Vs Muskrat: What Are The Differences?
10 Incredible Mink Facts
Mink Poop: Everything You've Ever Wanted to…
See 'Dominator' - The Largest Crocodile In…
See a Wildebeest Launch Itself Over Two…
↓ Continue Reading To See This Amazing Video

Otter and mink are semi-aquatic mammals that resemble one another in quite a few ways. In fact, they are so similar that people often mistake them for one another when seen in the wild. We are going to look at a few of the differences (and similarities) between these two animals and learn all we can about them. They are truly fascinating animals that deserve our attention! Let’s take a look and discover: Otter Vs. Mink, what are their differences and similarities?

Otter Vs Mink: Looks and Size

The first thing to note when understanding the differences between these two species is their size. However, within that size discrepancy, is variation attributed to species. There are 13 species of otter, all of which look relatively similar, except for their size. Otters have long bodies, short limbs, webbed feet, and strong tails. Describing them as “seal-like” wouldn’t be too far from the mark. The smallest otter species is the Asian small-clawed otter, and the largest species, with two tied for first, is the giant otter and the sea otter.

Mink are also semiaquatic animals and look the part, just like otters. They have long bodies, short limbs, and rich glossy coats. Where an otter looks seal-like, a mink looks ferret-like, however. There are two species referred to as “mink,” the European mink and the American mink. Due to their rich coats and beautiful colorings, mink have been a source of fur for hundreds of years. In fact, mink farming is a regular practice in many countries and provides fur to clothing companies all over the world.

Although they may appear similar in many ways, otters are, on average, much larger and more aquatic-looking than mink. Otters generally resemble mammalian seals, while mink are much more weasel-like in their appearance.

Otters are incredibly well-spread creatures, inhabiting almost every continent in the world. In North America, the North American river otter, the sea otter, and the Alaska sea otter can all be found. South America is home to marine otters, neotropical otters, southern river otters, and giant otters. Africa is home to the Cape clawless otter, the Congo clawless otter, and the spot-necked otter. Eurasia is home to the Asian small-clawed otter, the hairy-nosed otter, and the Eurasian otter. In each of these various regions, otters prefer to live no more than a quarter-mile from water as it’s their primary mode of living and eating. The exact habitat depends on the species of otter (sea otters prefer coastal environments while Congo otters prefer torrential streams in the mountains), but they all prefer wet climates with a water source nearby.

American mink live in parts of every state except Arizona. European mink live in a smaller range, although historically it was much larger than it is now. Currently, European mink live in small regions in Spain, France, Romania, Ukraine, and Russia, although most of the population is in Russia. The most important thing for mink is having access to water. They can generally be found around streams, lakes, rivers, marshes, and even along coastlines in some places.

As a species, otters are more distributed across the world and live in a greater array of environments. Mink generally live in wooded areas near rivers, lakes, and streams. Still, both are common enough that some determined searching would likely turn up one of them!

With 13 different species in countries all over the world, otters don’t always abide by the same dietary rules. Still, there are a few things that most of them share in common. Generally, otters get their food from the water and are incredibly efficient at doing so. Most of their diet is based around fish and invertebrates, but some do eat some plants and other small mammals. Their diet includes fish, crayfish, crabs, frogs, eggs, birds, reptiles, and amphibians. Some species have been seen eating small mammals, mainly muskrats or rabbits. Since otters have such a high metabolism, they are constantly hunting and eating.

Mink are also great predators that share a similar diet to that of the otter. They also get most of their food from the water and rely on it as a primary resource. Their diets include muskrats, chipmunks, mice, rabbits, fish, snakes, frogs, birds, and even some vegetation (although only the European mink seems to do this). After a kill, they will often keep leftovers in their den for a later meal.

Both the otter and mink have similar diets. The otter is fish reliant, however, while the mink generally opts for small mammals.

Mink and otters are both incredible swimmers. Still, part of identifying them comes with learning their different swimming patterns. A helpful identification tactic is to see them swimming. Mink generally swim higher than otters do, revealing most of their back in the process. An otter swims lower in the water, generally only allowing its head or nose to poke out.

An otter nest is known as a “den” and is the central point for groups of otters to organize around. Generally, the den is along the edge of the water, especially for otters that live near streams or rivers. Additionally, they are known to create their dens in rock piles or in hollow logs. If a suitable den can’t be found near water, they will search up to .5 miles away before looking for a new spot.

Mink also make nests, only they do it by digging with their claws. They will usually dig out their dens or make their nests inside hollow logs if they are lucky enough to find one. Once they find a location, they will fill it with grass, leaves, and other soft material to make it more comfortable and warm. Occasionally, mink will even use the leftover fur from a kill to line their nests as an added comfort.

Both otters and mink belong to the Mustelidae family, a group of carnivorous animals that includes badgers, weasels, and martens. Generally, the species in this family are intelligent, have elongated bodies with thick fur, and are solitary creatures. Within the Mustelidae family are nine subfamilies. Lutrinae is the subfamily for otters, while mink belong to the weasel subfamily, Mustelinae. 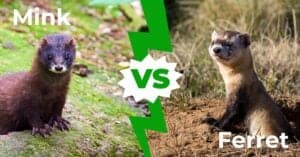 Mink Vs Muskrat: What Are The Differences?

Mink Vs Muskrat: What Are The Differences? 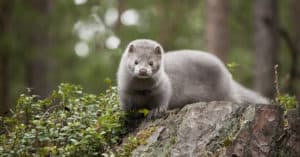 Mink Poop: Everything You’ve Ever Wanted to Know