When comparing a pangolin vs armadillo, it’s no surprise that many people often get the two animals mixed up. These two small-to-medium-sized insectivores both possess hard scales made of keratin, which is the same material in human fingernails and toenails. When many people think of pangolins, their first thought might be of the Pokemon named Sandshrew, which bears an uncanny resemblance to the scaly pangolin. Meanwhile, most people associate armadillos with roadkill, given that several species jump when frightened, which unfortunately causes them to often collide with oncoming vehicles. That said, of the two species, the pangolin is closer to death’s door. Due to their popularity in traditional medicines, pangolins represent one of the most heavily trafficked animals in the world, and several species face extinction.

Given the unique threats, habitats, and backgrounds of pangolins and armadillos, it’s worthwhile taking the time to compare them to one another. In this article, we’ll discuss several different ways that you can distinguish the two from one another. Furthermore, we’ll answer several frequently asked questions concerning these two fascinating mammals. Here are 9 key differences that separate a pangolin vs armadillo.

The 9 Key Differences Between Pangolins and Armadillos

Although they may look similar, pangolins and armadillos do not share a similar lineage. Pangolins, which get their name from an Ancient Greek word that means “clad in scales,” belong to the order Pholidota. While many families used to exist within this order, now only one extant family remains, Manidae. The Manidae family contains three genera that include all 8 current pangolin species: Manis, Phataginus, and Smutsia. Meanwhile, armadillos, or “little armored ones” in Spanish, belong to the superorder Xenarthra, which also includes anteaters and sloths. Within this order, they fall into the sub-order Cingulata. Scientists recognize 20 official armadillo species, many of which belong to the families Chlamyphoridae and Dasypodidae.

Pangolins and Armadillos: Distribution and Habitat

Generally speaking, few differences exist in the habitat of a pangolin vs armadillo. Both typically enjoy hot, tropical climates. You can often find them in environments including deserts, rainforests, and grasslands. However, you will never find them in the same habitat, because they live on opposite sides of the globe. The four Manis species range throughout South Asia, while the two Phataginus and two Smutsia species live in sub-Saharan Africa. Depending on the species, pangolins either make their homes in trees or in tunnels underground. Unlike the more arboreal-inclined pangolins, armadillos only nest underground in burrows up to 15 feet below the surface.

At first glance, one could easily come to the conclusion that there is no difference in the movement of a pangolin vs armadillo. After all, they both stand low to the ground and develop short, stocky legs. However, if you watch them move, several key differences reveal themselves. Pangolins generally move much slower, reaching a speed of only 3 miles per hour compared to an armadillo’s maximum speed of 30 miles per hour. When pangolin’s walk, they walk with their front claws bent under their footpad. At times, they will also walk on only their back two legs, typically when running away, and some species adapted to climb trees. Meanwhile, armadillos prefer to stay on the ground, except for when they decide to cross water. In these circumstances, some species can walk underwater, a feat made capable by their ability to hold their breath for up to six minutes.

Although pangolins and armadillos both subsist mostly on insects, they evolved very different methods for consuming their food. Oddly enough, pangolins evolved without teeth. Rather than chew their food, they simply use their sticky tongues to catch insects and then swallow them whole. Unlike pangolins, armadillos do possess teeth, which they employ vigorously while munching on insects. Similar to some other species such as elephants and manatees, an armadillo’s teeth are not divided into molars or premolars. In addition, armadillos do not grow incisors or canines.

Upon inspection, it’s easy to spot the differences in the armor of a pangolin vs armadillo. Pangolins sport flexible armor consisting of sharp, overlapping plate-like scales. They are the only known mammals that grow scales in this way. While they look similar to lizard scales, pangolin scales share little common either structurally or composition with lizard scales. As for the armadillo, its armor differs in several ways from a pangolin’s. Armadillo armor is formed by plates of dermal bone covered in keratinous scales called scutes. These plates are typically located on the shoulders and hips, while connected bands run the length of an armadillo’s back and tail. Different species feature unique numbers of bands, and in this way scientists can easily distinguish between different types of armadillos.

It’s a common misconception that all armadillos can curl into a ball to protect themselves from predators. In fact, the defense mechanisms used by a pangolin vs armadillo differ primarily in that pangolins more frequently curl into balls than armadillos. Of the 20 species of armadillo, only three-banded armadillos use this strategy to escape prey. Most armadillos cannot leverage this tactic, because their armor is too tight, but the armor of three-banded armadillos is loose enough to take advantage of this brilliant maneuver. For their final defense mechanism, pangolins also evolved glands near their anus that emit a noxious odor similar to a skunk’s. When armadillos want to avoid predators, they most frequently run away at high speed and take cover in thick cover. On some occasions, they may also try to dig their way to safety using their powerful claws.

Pangolins and Armadillos: Feeding and Digestion

With a few notable exceptions, the diet of a pangolin vs armadillo share a lot in common. Pangolins and armadillos are both insectivores and subsist primarily on a diet of ants, termites, and larvae. That said, while pangolins almost exclusively live on this diet, armadillos will also eat invertebrates, along with the occasional piece of fruit. While armadillos primarily scavenge for food or use their claws to dig up insects from the soil, some pangolins evolved a unique way of foraging. These arboreal pangolins use their claws to peel off bark from trees to access any insects hiding inside. Since pangolins can’t chew, to aid them in their digestion they ingest small rocks while eating. Known as gastroliths, these tiny rocks help pangolins to grind the food in their stomachs. To assist in this task, they developed a gizzard covered in sharp spikes, which also aids in the digestion process.

Pangolins and Armadillos: Mating and Reproduction

Both pangolins and armadillos live relatively solitary lives, except during mating season. Pangolins normally reproduce once per year in either the summer or autumn. If the competition for females is especially fierce, male pangolins may wield their tails as clubs and use them to fight each other to determine which male will get the girl. Typically, female pangolins give birth to one live offspring, although some species can give birth to up to three pangopups at once. Meanwhile, some species of armadillo in the genus Dasypus always give birth to identical quadruplets. Outside of these armadillos, most species may give birth to one to eight live offspring at a time.

How long is a pangolin’s tongue?

Large pangolins can extend their tongue up to 16 inches. Like the giant anteater and tube-lipped nectar bat, their tongues attach to their thorax rather than the hyoid bone.

Are pangolins and armadillos endangered?

The IUCN considers all 8 extant pangolin species as threatened. To be precise, three are critically endangered, three are endangered, and two are vulnerable. Meanwhile, some armadillo species are threatened, such as Yepes’s mulita, while others like the nine-banded armadillo are not.

Can you get leprosy from armadillos?

Due to their low body temperature, armadillos possess few protections from the leprosy bacterium, Mycobacterium leprae. It is possible to get leprosy from an armadillo by handling it or consuming armadillo meat. 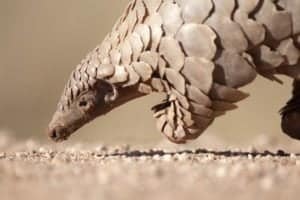 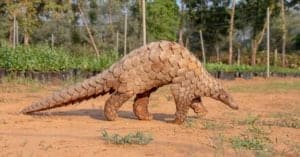