Poisonous Snakes in Texas: The 14 Snakes That Should Make You Worry

Reptiles are fascinating creatures, but they can also be quite deadly. Texas is home to dozens of different species of snakes. However, relatively few of these snakes are dangerous to humans. Today, we’re going to examine the poisonous snakes in Texas. You’ll know which snakes to look out for in this part of the country!

The Four Venomous Snakes in The United States

The United States is home to four different venomous snakes. They include the cottonmouth (water moccasin), coral snake, rattlesnake, and copperhead. Although these snakes are not present throughout every part of the United States, you can find at least one type of these poisonous snakes in Texas.

The cottonmouth, rattlesnake, and copperhead snakes are all known as pit vipers due to their ability to sense heat using specialized organs by their nostrils. Each of these snakes has venom that can kill people. Yet, the rattlesnake is recognized as being the deadliest pit viper in the United States.

The coral snake is not a pit viper, but it is deadly, nonetheless. In fact, the coral snake has the most dangerous venom out of any snake on this list due to its neurotoxic qualities.

The government in Texas has made some attempts to regulate the spread of these deadly snakes. They have held rattlesnake roundups to reduce the number of snakes that are near populated areas.

However, curbing the snake population is a delicate task, and the guidance surrounding these roundups is changing. After all, these snakes are important to the ecology of the state, so killing them all is inadvisable.

The Poisonous Snakes in Texas

Texas is home to 96 snakes, and 14 of them are venomous species and subspecies. Garter snakes and various non-venomous water snakes are common sights throughout Texas. Of course, the types of snakes differ depending on an individual’s location within the state.

For now, we’re going to take a look at a list of the 14 venomous snakes in Texas. They include:

As you can see, while all the four major types of venomous snakes can be found in Texas, most of these reptiles are different varieties of rattlesnakes. These animals are easy to tell apart from the others because of the iconic rattle on their tails. When they have time to get into a defensive posture, they will draw up into an S-shape and rattle their tail.

Still, it’s important to know how the four main types of venomous snakes in Texas are different from one another.

The Differences Between the 4 Types of Poisonous Snakes in Texas

Since you can encounter all of the United States’ venomous snakes in Texas, it’s necessary to know how to differentiate them. Discover how these snakes differ from one another.

Coral snakes are easily recognized due to their colors. These snakes have bands of yellow, black, and red along their body. Don’t try to recognize the mnemonic device about colors touching colors. If you see a snake that looks this way, back off. They are small venomous snakes, but they have a deadly neurotoxic venom.

Copperheads are common venomous snakes; the worst part is how easy it is to step on them. These animals can blend in well with leaves or sand, so you may not even realize that you’re close to one. For that reason, copperhead snakes make up most of the venomous snakebite injuries in Texas.

Cottonmouths are also called water moccasins since they spend most of their time near water. If you encounter one, it will usually flee. However, some may stand their ground and will open their mouths in defensive posturing. If you see a snake with a white mouth, an arrow-shaped head, and patches of white on its chin, it’s time to leave.

Rattlesnakes are probably the most recognizable venomous snakes in the United States, and they are the most numerous in Texas. These snakes are known for their threat display that integrates a rattling tail and draws themselves up in a striking position. If you hear the rattling noise, you need to stop, examine your surroundings, and slowly move away from the sound.

How Many People Die from Poisonous Snakes in Texas?

About 7,000 people are bitten by venomous snakes per year in the United States, but only about five people die. The advances in medicine and antivenom have made snake bites in the United States very survivable. Unfortunately, due to the nature of some venoms, people that suffer these bites are often left with some sort of disability.

Knowing how to identify the dangerous snakes in your area is important. However, it’s equally important to learn to respect wild animals. Aside from people working in remote areas, another group of people that get bitten are those trying to handle the snakes. Although many snakes’ first reaction will be to get away from a human, they are not afraid to use their venom to save their lives.

Let the animals be, and you might just save yourself from pain and a serious injury. 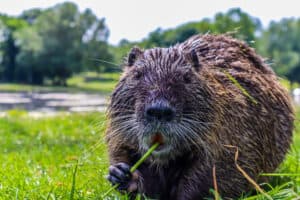