Prawn vs Crawfish: The Key Differences

rugco/Shutterstock.com
Share this post on:
More Great Content:
Crayfish vs Lobster: 5 Key Differences Explained
The 10 Largest Crabs in the World
Rock Crab vs Dungeness: 6 Differences to…
What Do Crabs Eat?
Discover the Largest Lobster Ever Caught!
Discover The World's Oldest Lobster (140 Years…

Prawns and crawfish are similar creatures, although their names aren’t exactly “scientific” and more colloquial. Despite these naming confusions, the creatures are somewhat related and are classified as crustaceans. Today, we will explore the differences between a prawn and a crawfish to see what makes them unique. Let’s discover prawn vs crawfish and why they are special.

Comparing a prawn and a crawfish

The key differences between a prawn and a crawfish

The key differences between a prawn and a crawfish are appearance, habitat, and diet.

The usage of the term “prawn” is a bit confusing since it isn’t actually a scientific term. Even more, the word means various things in different places. In North America, a prawn is just a large shrimp, despite large species of shrimp already having their own name. In the UK, a prawn is any shrimp-like creature. For the purposes of this article, we will be referencing prawns as shrimp-like creatures, although there is variability even within shrimp since shrimp isn’t a scientific term either.

Crawfish are small crustaceans that closely resemble a miniature lobster. They almost always live in freshwater and can be found in brooks, streams, ponds, and more. Crawfish are an essential resource in the southeastern United States, especially in Cajun cuisine. Additionally, crawfish go by a plethora of names, including crawfish, craydids, crawdaddies, crawdads, freshwater lobsters, mountain lobsters, rock lobsters, mudbugs, baybugs, or yabbies.

In the United States, a prawn is a large shrimp. The largest prawns that most people eat in the United States are the tiger prawn, the California spot prawn, and the eastern king prawn. Most species of shrimp are only a few inches long, while the largest can reach upwards of a foot long.

Prawns are shrimp-like in appearance. They have an exoskeleton and ten legs.

Crawfish look just like miniature lobsters. They even have large claws and a segmented tail.

Crawfish are almost totally freshwater dwelling, although some can tolerate brackish water. They can be found in almost any body of water, including streams, ponds, lakes, and more.

Prawns and shrimp are known to eat plant material, organic matter, and micro-organisms.

Crawfish will eat almost anything, including fish, shrimp, water plants, worms, insects, snails, and plankton. They often use their large claws to catch invertebrates and small fish as they pass by.

Prawn vs Crawfish: Human use

Shrimp and prawns are among the most commonly eaten crustaceans in the entire world in every culture. In many places, entire people groups are economically dependent on shrimp and prawn fishing. Certain varieties of shrimp are kept as pets in fish tanks.

Crawfish live all over the world, but they are of special cultural importance in the American southeast. Louisiana produces 100 million pounds of crawfish a year. Additionally, crawfish are an essential element of Cajun cuisine. 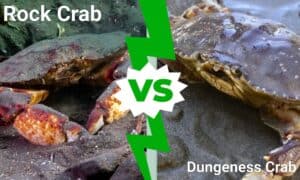 Rock Crab vs Dungeness: 6 Differences to Identify Each One