Preediwat/Shutterstock.com
Share this post on:
More Great Content:
Continental vs Flemish Giant Rabbits: Key Differences…
The 10 Largest Rabbits In The World
Bunny vs Rabbit - 3 Main Differences
What Do Bunnies Eat?
What Do Rabbits Eat?
Rabbit Lifespan: How Long Do Rabbits Live?

The phrase “breeding like rabbits” is common for a reason. When a warren of unfixed rabbits are together, they breed almost constantly. Rabbit gestation is very short, so they are not pregnant for long.

One may not think of rabbits as constantly breeding. Instead, they think of the cute little fluffy bunny who hops around and waves its tail. It is important to get pet rabbits fixed for this exact reason, to help them calm down and make sure you don’t accidentally have any babies. It only takes a minute for them to breed.

Rabbit breeding is unique, as they can ovulate spontaneously and for quite a long time. Let’s look at the process of rabbit gestation and answer some of the more standard questions.

What Age Can Rabbits Become Pregnant?

Rabbits become sexually mature at a young age. Some females can be ready to breed as young as four months, though it’s usually around six to eight months. If you have a bunch of baby rabbits, it is essential to separate them by gender around this time so that you don’t have more rabbits.

Male rabbits can become sexually mature between three to six months. Ensure any bonded rabbits you have are spayed or neutered to prevent accidental breeding.

Rabbits are fertile all year round and don’t have a period like other animals do. They ovulate as soon as they begin to mate and then are in heat for around two weeks. This, along with their short gestation period, means you can end up with many rabbits within a few months.

How Long Are Rabbits Pregnant?

Rabbits are pregnant for around a month or 30-33 days. For someone who may breed rabbits, this is a reasonable amount of time because you could have 12 litters a year from the same doe.

Having a couple of pregnant rabbits at a time means you could have upwards of hundreds of rabbits by year’s end. Most people aren’t in the market to breed rabbits, though.

The average rabbit owner is just curious about what could happen and is taking steps to ensure that it doesn’t.

How to Tell if Your Rabbit is Pregnant?

It is relatively simple to tell if your rabbit is pregnant, but it is crucial to be very careful when checking because you could hurt the babies.

Take two fingers and gently palpate around the bunny’s stomach. You should feel some small lumps around there, and it should be pretty obvious. If you’re worried about causing a miscarriage, you can always take the doe to the vet. There are also a few other signs to look out for.

If your rabbit is expecting, then there will be signs. She will have swollen breasts from where the milk will come. Pregnant rabbits also tend to nest, so if your bunny is dragging hay around to make a nest, you might want to check out her stomach.

Another sign of pregnancy is if your bun is drinking more water and eating more than usual. She could be eating for ten! Remember to be careful, too. A pregnant rabbit can become more aggressive to male rabbits at the time. This is instinctual because rabbits are so delicate during their pregnancy.

A word used about rabbits giving birth is kindling. Kindling literally means the rabbit is in the act of birthing. A kindling usually takes around 15-20 minutes and happens at night. They occur at night because rabbits feel safer in the darkness and that there are less likely to be any issues.

Rabbits don’t need help giving birth, and it is a straightforward process. The kits should come out one after the other, anywhere from three to twelve. Rabbit births are a quick and easy process.

How Long Do Rabbits Nurse?

Once the babies are born, you will need to leave the mother rabbit alone for a few days. They can become aggressive when they have their kits, especially at the tender newborn stage.

The kits are blind, deaf, and completely hairless when just born. They look like little naked rats. After about a week and a half, this will start to change. They will grow fur, and their eyes will open. This is why a mother is so careful with her young ones.

Baby rabbits don’t nurse for very long either, but it is another pleasant aspect of the pregnancy and kindling process. Adult rabbits are most active at dawn or dusk, as they are crepuscular animals.

Since rabbits are crepuscular, the mother rabbit will nurse her kits twice a day, at dawn and dusk. They continue to nurse for four to six weeks, and then they are free to start munching on fresh hay, veggies, and some good pellets.

Be careful, though. Rabbits can still fall pregnant at this stage, so keep any unfixed males away from the female. She could immediately become pregnant, even mere hours after her kindling.

Another tip for a mother rabbit who’s just given birth is to make sure she has time away from her babies. They can keep warm in the nest with one another but doe’s don’t naturally want to be near their babies like other animals. If they get too irritated with their kits, they could hurt them.

Try to have a box or hut where she can hide from them since they can’t see or hear, and she can make her own decisions when to head back over to them.

How Long Do Rabbits Live?

When taken care of properly, domesticated rabbits can live between eight to twelve years. Like a cat or dog, rabbits are a long-term commitment pet, and they require much care and attention.

If you’re looking to adopt a pet rabbit, or are considering breeding your current one, just be sure to understand what it takes to parent one rabbit, let alone ten. 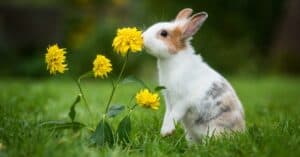 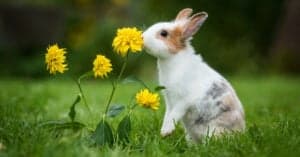