schani / Creative Commons
Share this post on:
More Great Content:
What Do Raccoons Eat?
Baby Raccoons: 5 Incredible Facts & 5…
How and Where Do Raccoons Sleep? Everything…
Raccoon Lifespan: How Long Do Raccoons Live?
Raccoon Teeth: Everything You Need to Know
Are Raccoons Dangerous?

While you may think that a red panda vs raccoon are very similar animals, they have more differences than you’d expect! From their geographical locations to their dietary preferences, raccoons are extremely different from red pandas. But in what ways specifically do these two animals differ, and what else can you learn about them?

In this article, we will address all of the similarities and differences between red pandas and raccoons. This includes their sizes, appearances, and their behaviors, both in the wild and in captivity. That way, you’ll have a true understanding of both of these unique and lovable creatures. Let’s get started!

While you may not notice it unless you are looking at a red panda and raccoon side by side, there are some physical differences between these two creatures. Raccoons grow larger than red pandas overall, both in length and weight. Let’s discuss this in more detail now.

The average red panda reaches 7 to 15 pounds, while the average raccoon weighs anywhere from 15 to 25 pounds. However, the red panda often grows longer than raccoons because of their tail, but the body of a raccoon is usually larger than that of a red panda. For example, raccoons grow anywhere from 25 to 35 inches long, while red pandas can reach 45 inches long if they have a particularly impressive tail.

Red pandas live in very different locations compared to raccoons. You can only find red pandas in high mountainous and forested regions of Asia, while raccoons can be found around the world. Raccoons are more adaptable than red pandas in this way, as they only need trees and locations with some water source in order to survive.

Red pandas require bamboo in order to survive, as this is their main source of food, while raccoons eat a great number of things. Raccoons are notorious for their opportunistic eating habits, often rating campsites or trash cans outside of suburban homes for a meal. Red pandas do not behave in this way, given their isolated and specific location as well as dietary preferences.

The primary reason people compare red pandas and raccoons is because of their physical appearance. Both of these creatures are similar in size, have detailed hands and feet, and have trademark ringed tails that separate them from any other species of animals. However, their appearances are also different in a great number of ways.

For example, red pandas earned their names based on their rusty red and white colorations, while raccoons are gray and white in appearance. Both of these creatures have thick and adaptable coats so that they can survive in cold weather. They are also both masked and appear to have markings around their eyes and face.

However, red pandas have red and cream-colored markings, while raccoons have black and white markings. The face of a raccoon is also more pointed in its snout and ears, while red pandas have rounded faces and eyes.

Both red pandas and raccoons are nocturnal creatures. However, there are many behavioral differences between them. For example, red pandas are very shy and quiet individuals, while raccoons boldly face other animals and humans with little hesitation. This is why raccoons pose many problems to urban or suburban areas, while red pandas enjoy their remote lifestyle.

Red pandas also don’t spend time with their own kind, preferring solitude, while raccoons form small and tight knit familial circles. Many scientists assumed that raccoons also prefer solitude, but studies show that this is not the case depending on the gender and available resources for raccoons.

A final difference between red pandas and raccoons lies in their lifespan and endangered status. Red pandas live anywhere from 8-12 years, while raccoons live 12-16 years on average. However, this may not be the case for all wild raccoons, as they are often consumed by a wide variety of predators.

Red pandas are far more endangered than racoons are, given their dwindling habitat and somewhat complicated breeding methods. Raccoons are found around the world and have very little trouble making more of their kind. They are more adaptable than red pandas overall, which may contribute to their higher lifespan. 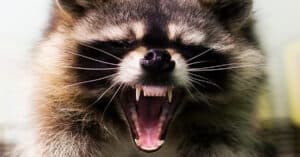