See an Elephant Nearly Trample Hyenas to Save Their Lion Friend

Written by Angie Menjivar
Published: November 23, 2022
© Ocean Eloy/Shutterstock.com
Share this post on:
More Great Content:
Elephant Lifespan: How Long Do Elephants Live?
8 Animals That Can Kill An Elephant
Mammoth vs. Elephant: What's the Difference?
What Is The World's Largest Elephant?
What Do Elephants Eat? Their Diet Explained
What's a Baby Elephant Called & 9…

This is a safari video that captures a lion lounging on some dried grass just in front of the camera. It seems old and a bit tired, as if it may be recovering from something. It looks up and sniffs the air as you hear wildlife sounds coming from behind the camera.

As the lion continues breathing heavily, it looks around before finally standing up and moving slowly just off-screen. You can tell it kind of has a limp but it’s not entirely clear what’s going on with this lion.

It walks by the vehicle, and you can see that there are two more vehicles just on the other side of the road. They’re all parked with windows open, watching their environment intently.

The lion pauses, looking forward and the person behind the camera zooms in. You can see that behind the car on the other side of the lion are two hyenas. They blend in so well with the background that it’s hard to spot them at first. The only thing separating the two hyenas from the lion is the vehicle.

It seems they all know about each other’s presence but they all just kind of stand there looking around. If you look at the lion, you notice it continues breathing heavily — almost panting. The lion starts crossing the road where the cars are located to the other side of the park.

The camera pans over to the hyenas as they start making their way toward the lion. They walk in unison and the camera goes back to capture the lion as it digs its back feet into the dirt and sits down, obviously exhausted.

Next, an elephant approaches. It’s walking with a quick pace, its ears and tail flapping about. It walks over behind the lion and the video cuts to another scene. Here, you see the elephant running toward the hyenas, trumpeting as it does so. The hyenas don’t hesitate to take off running.

The elephant continues chasing them down, making sure to create as much distance as possible between the two hyenas and its lion friend. It’s no surprise that the elephant noticed that the hyenas were lingering with ill intentions. Elephants are incredibly intelligent and caring creatures.

Up Next, Check Out More Elephant Behavior:

Watch Elephants Stampede to a Family Reunion With Their Favorite Human

Watch An Elephant Face Off Against a…. Helicopter?

Watch a Polite Elephant Return a Child’s Shoe They Dropped 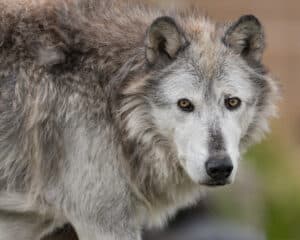