Have you ever wondered if there are any snakes that live on beaches? If so, you’re not alone!

Snakes are some of the most interesting animals around. They have the ability to live in nearly every type of ecosystem, and they come in a variety of shapes, sizes, and colors. They’re also a crucial part of the ecosystem – including beach ecosystems.

While you may not expect to find any snakes that live on the beach, there are a few that you may spot every now and again. Interested in learning more? Let’s dive in!

Are there any snakes that live on beaches?

Typically, you won’t find any snakes on the beach itself. Some species may live in the dunes around the beach, while others may live in the ocean itself. However, the beach doesn’t offer any protection from predators, so snakes that live on beaches are few and far between.

That doesn’t mean there isn’t an occasional visitor, however!

While snakes may not often live on the beach itself, they’re not an uncommon sight near beaches. In fact, just recently, a woman in South Carolina spotted a snake in the surf. Sea snakes that are common in reefs and open water may also wash up from time to time. Plus, in areas where tourists and beachgoers are popular, littering may be a notable concern. This trash draws the attention of several coastal pests, like rats, that are the perfect prey for snakes.

So, although there may not be many snakes that typically live on beaches, there are several that you may see.

Types Of Snakes You Might See At The Beach

There are several types of snakes you may see around the beach, whether in the water, on the dunes, or in the wooded areas that make up maritime forests. These species can be both venomous and non-venomous, so it’s important to use precautions if you happen to stumble across one of these amazing reptiles during your beach day.

Ready to learn more about snakes that live on beaches? Here are six species that may be found!

Rattlesnakes are a rare sight on beaches. This is because, unlike sea snakes, they’re not adapted to the salty conditions. However, they may slither in from the dunes or forest areas and make a surprise appearance. In fact, it was a rattlesnake that was spotted in the surf at Myrtle Beach!

There are several species of rattlesnake that you may encounter around the beach. These are a venomous species. Though they may be frightening, it’s important to reach out to professionals for help if you notice one in the surf. Rattlesnakes cannot survive long in saltwater, and because they play such a major role in the health of our ecosystems, it’s important to help preserve these species.

The coachwhip is a non-venomous snake that gets its name from its long, slender body that resembles a whip. There are six subspecies found across the United States and Mexico, and they’re a common sight at the beach.

Coachwhips live in many habitats, ranging from forests to suburban areas. However, they’re also known to thrive in the sand dunes at the beach where they have plenty of access to their preferred prey. Occasionally, you’ll also catch a stray coachwhip venturing out to explore the surf and sand!

The black racer, also known as the eastern racer, is a large, black snake. They’re non-venomous, although their large size allows them to pack a painful bite.

Because the black racer is common in states with beaches, such as Florida, they may occasionally appear on the shore. This is especially true when human development occurs in their habitat and drives the black racer to relocate.

The eastern indigo snake is the longest native species in North America. While they’re more likely to be found in the southern longleaf pine forests they call home, they will occasionally make their way to the beach.

Like the black racer, they’re a common sight in Florida, including in the Keys. They’ve even been found on Captiva Island!

When the elegant sea snake comes to shore, they tend to make a rather noticeable splash. In fact, the last time this sea snake slithered onto shore, which was back in 2021, it created quite the uproar on the news and social media.

However, it’s actually not common to spot them on the beach itself. Sea snakes like this species tend to live further out in the ocean. Although considered an aquatic reptile due to the ability to survive on the endless sea, you might find them on beaches from time to time. 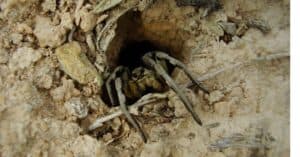 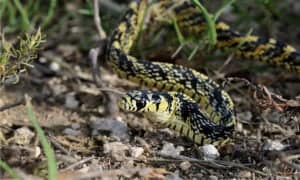 Copperhead vs Chicken Snake: What are the Differences?