Nilanka Sampath/Shutterstock.com
Share this post on:
More Great Content:
The 10 Largest Squirrels in the World
Squirrel Lifespan: How Long Do Squirrels Live?
How and Where Do Squirrels Sleep?- Everything…
What Do Squirrels Eat?
Fox Squirrel vs Red Squirrel
Why Do Squirrels Chase Each Other?

Squirrels are curious, industrious little beings that never seem to stay still. Whether they’re scurrying from branch to branch or driving some poor dog out of its mind, they always have a mission to accomplish. They’re so cute that some people even tame them and keep them as pets. But just like any other animal, one of their most vital tasks is to produce as many offspring as possible. So, how many young can squirrels produce at once? Do squirrels make good parents? And how long are squirrels pregnant? Read on to find out all about these rodents and their reproduction!

Squirrels are small to medium-sized rodents belonging to the family Sciuridae. There are approximately 200 species of squirrels in the world. Scientists generally divide these species into tree squirrels, ground squirrels, and flying squirrels.

Tree squirrels are the most popular and include squirrels that spend most of their time in trees. Examples are:

Ground squirrels spend most of their time on or under the ground. This group includes chipmunks, prairie dogs, and marmots. Other examples are:

Flying squirrels are equipped with patagium, which is a special skin membrane connecting the wrist and ankle. This enables them to glide from tree to tree, mimicking flight. Examples are:

Squirrels are agile, slender animals with long, bushy tails. They have terrific vision with eyes that appear large for their faces. Their paws are highly dexterous, with four or five appendages each. Squirrel fur is short and soft, and it comes in various colors, including white, grey, brown, golden, red, and black. With sharp teeth that never stop growing, including four incisors, squirrels must gnaw continually to wear them down.

Squirrels vary somewhat in height. One of the most common squirrels, the eastern grey squirrel, has a body length of 9-12 inches. The smallest squirrel in the world is the African pygmy squirrel, measuring only 5 inches from nose to tail. The largest squirrel in the world is the red and white flying squirrel. This mammoth of a rodent can grow up to 3.9 feet long, including the tail, and weighs up to 9.5 pounds!

Squirrels are omnivores and carefully store food in multiple locations for the barren winter months. On the vegetarian side, they will eat nuts, seeds, fungi, fruits, vegetables, and other plant matter. When these food sources are insufficient, they will also turn to protein sources like eggs, insects, amphibians, other rodents, young birds, and snakes.

Squirrels face a number of predators in the wild. Cats, coyotes, foxes, raccoons, weasels, bobcats, and badgers all hunt squirrels. In addition to this, they must constantly watch out for birds of prey like eagles, owls, hawks, and falcons.

Squirrels are native to every continent, with the exception of Australia and Antarctica. While Antarctica has no squirrels at all, Australia is home to 2 introduced species: the American grey squirrel and the northern palm squirrel. These species are considered invasive.

Unsurprisingly, tree squirrels prefer to live in forests, making their homes in nests or hollow tree stumps. They are most likely to live in coniferous or mixed forests. Ground squirrels choose grasslands as their habitats, burrowing deep into the ground. They commonly dwell in parks, pasturelands, fields, and meadows. Flying squirrels make their homes in deciduous, coniferous, or mixed forests. They make nests and burrows, sometimes commandeering abandoned nests or holes.

Squirrels are friendly and inquisitive creatures, often allowing humans to feed them from their hands. Among themselves, most species are communal and form hierarchies within their groups. Males tend to dominate except when young are present; females will jealously guard their territory. Some species of squirrels, like the eastern grey squirrel, are solitary unless mating.

Squirrels can be extremely noisy in ways like chattering, barking, squeaking, and snorting. They communicate to warn each other of danger or to indicate a readiness to mate. Male eastern grey squirrels, for example, make sneezing sounds when pursuing a female in heat, and females often “moan” to attract males.

Squirrels typically breed only once or twice a year. Mid-December or early January are the prime breeding times, with some squirrels mating again in June. Males chase females through the trees and mate when they catch them. This chase is accompanied with plenty of noise.

Females usually reach sexual maturity around 1 year of age. Males can mate by their 11th month unless they are living with an older, dominant male. Then, they may not reach sexual maturity for 2 or more years. Females may mate or attempt to mate with several males over a few days. Because they only come into heat twice a year, they must make the most of the opportunity.

Squirrels typically live between 5-10 years in the wild, though this differs significantly according to species. Eastern grey squirrels may live up to 18 years of age. Some squirrels in captivity have lived as long as 24 years.

How Long Are Squirrels Pregnant?

Most squirrels are pregnant for 4-6 weeks before giving birth. There is considerable variation among species. The eastern grey squirrel, for example, has a gestation period of about 44 days. The gestation period for most chipmunks, on the other hand, is between 28-35 days.

How Can You Tell If a Squirrel is Pregnant?

Pregnant squirrels can be identified in a number of ways. First of all, a pregnant female will increase her food and water intake to account for the kits (baby squirrels) growing inside her. She will also begin gathering materials like twigs and leaves for a nest. She may build more than one nest as she prepares to give birth. Keen observers may notice her nipples becoming more prominent in preparation for nursing. Her abdomen will continue to grow in size the longer she is pregnant.

Pregnant squirrels are likely to become more territorial and aggressive than usual. If you notice this behavior, do not approach.

How Often Can Squirrels Get Pregnant?

Squirrels can give birth to 2 litters a year, though yearling females may only bear once. Litters usually arrive in the spring and summer. Females only enter estrus twice a year for a day at a time, so the window of opportunity is limited.

Kits, or baby squirrels, typically arrive in litters of 3-5. However, it is possible for a litter to contain as many as 9 kits or as few as 1. Newborn kits don’t open their eyes until 4 weeks have passed. Weaning generally occurs by 10 weeks of age, though kits may explore outside the nest by the time they reach their 6th week. The mother will be fiercely protective of the litter and may move the nest if she perceives it to be in danger. Unlike many other rodents, squirrels rarely eat their young.

As cute and cuddly as squirrels appear to be, it’s best to leave them to their devices when it’s time for them to mate and give birth. 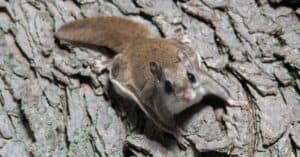 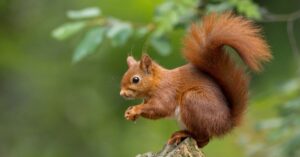