Written by Kyle Glatz
Published: February 15, 2022
© PhotocechCZ/Shutterstock.com
Share this post on:
More Great Content:
Deer Population by State: How Many Deer…
The 10 Largest Deer in the World!
Discover The Largest Whitetail Deer Ever Recorded
What Do White-Tailed Deer Eat? 20+ Foods…
Deer Poop: What Does Deer Scat Look…
Deer Lifespan: How Long Do Deer Live?
↓ Continue Reading To See This Amazing Video

People that live around rural areas often encounter deer, four-legged ruminants that are known for their skittish nature and humans’ love of hunting them for meat and sport. Anyone that has lived in a rural area with many deer in the surrounding area has probably heard terms like deer, stag, doe, and buck. These terms can be a little confusing and may even overlap at some points. We’re going to explain the difference between a stag vs deer and allow you to learn what all those aforementioned names mean.

Comparing a Stag vs Deer

Stags are adult male deer, and the term “deer” refers to any creature within the Cervidae family. Bucks are any male deer and does are female deer. The term buck applies to youthful deer as well as older deer, but stag is more accurate when talking about fully grown, mature, male deer.

An interesting side note is that the term “stag” is not used around the world universally. The most common name for a male deer is buck, and people will often interchangeably apply the term. Thus, it’s possible that some people might be completely unfamiliar with the term “stag” and will instead apply “buck” to a fully grown, mature, and large deer.

The 4 Key Differences Between Stag vs Deer

The most significant differences between a stag vs deer are their sex, weight, and morphology. As we have said before, stags are male deer, but the term “deer” can be used to refer to any member of the Cervidae family.

Another important distinction between stags and deer is their weight. Stags are the heaviest version of deer since they are adult males. Deer are sexually dimorphic, and the males tend to be much larger and heavier than the females.

Stag is a term that only refers to a specific kind of male deer – older, mature, and usually antlered deer. Yet, stag is not a term that one would use interchangeably with buck because “buck” is too broad of a term.

Stags have antlers but not all deer have antlers. The morphology of a stag and a deer are different in that respect. Confounding the matter is the fact that stags lose their antlers every year and regrow them anew in time for the mating season to begin.

Thus, the clearest indicator of a deer being a stag or a doe with only a brief look might not be present in the winter when they shed their antlers. However, stags will start to regrow their antlers when the warm weather arrives in spring and their bodies begin to produce more testosterone again.

A stag deer will often be the largest male in a group of deer, and they will weigh the most out of any deer. Stags weigh more than bucks and they weigh more than does, too. A stag will have a large body since they are fully mature animals.

The largest deer will stand between 24 and 26 inches tall at the shoulder, and they can weigh upwards of 990lbs. In these cases, the larger and taller creatures are most likely going to be stags rather than does.

A major difference between a stag and a deer, especially a buck, is their level of maturity. Stags are not young deer; they’re several years old, fully developed, and tend to be the most powerful deer in any herds that they are a part of.

Also, stags are noteworthy because they are the most aggressive males in their respective herds. These large adult deer grow their antlers so they can use them in fights against other stags that are trying to get mating rights. The difference in maturity helps separate stags from bucks in the realm of deer.

What Is the Difference Between a Stag and a Buck?

Stags are fully grown, mature male deer while bucks are male deer of any age. The term “stag” specifically refers to the older, mature stags that are typically the largest, heaviest, most aggressive males in a herd. Some people use “buck” and “stag” interchangeably since the term “stag” is not as popular as it was in the past.

What Do Stags Eat?

Stags are herbivores that spend the majority of their time grazing while looking for suitable foods. Among the foods they will eat most often are:

These different foods make up the vast majority of their diets.

Do Stags Shed Their Antlers Every Year?

Stags that live in cold environments have a tendency to lose their antlers in the early months of winter rather than at the point where the weather is harshest. However, some stags will not lose their antlers until it’s almost time for spring.

Even when stags lose their antlers, it’s still possible to tell them apart from does. After all, the stags will be much larger than the females in their herd. Also, it’s possible to look at a stag’s head to see if they have recently shed their antlers or if new ones are going to begin erupting. 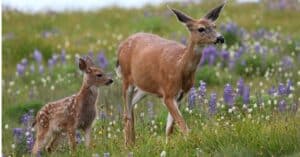