A new study commissioned by the United Kingdom confirms what Switzerland scientists determined in 2018: lobsters, crabs, and octopuses are sentient creatures. This means that they can experience varying levels of pain.

The research comes from the London School of Economics and Political Science. The study reports there is strong evidence that crustaceans and cephalopods not only feel pain, but also experience distress. The research shows that this is harmful to the animals.

The new legislation surrounding these animals will not ban the live boiling of lobsters nor affect the fishing and restaurant industries. However, this legislation will force lawmakers to consider the well being of lobsters, crabs, and octopuses when considering new laws.

This is a big step for advocates for crustaceans and cephalopods. For years we have listened to a 2005 study’s conclusions that lobsters cannot feel pain. With this myth officially dispelled, the well being of lobsters, crabs, and octopuses can be considered by the general public as well as lawmakers.

Cooks can reconsider the live boiling of lobsters and advocate for more ethical cooking methods. Just acknowledging the sentience of these animals is a huge step toward ethical animal welfare and treatment.

Despite the Swiss study naming lobsters, crabs, and octopuses as sentient, or capable of feeling pain, the United Kingdom is the first government that has actually acted on the research within their legislation. Hopefully, other countries will follow the United Kingdom’s lead.

What Can You Do?

What can you do in light of this study? Don’t boil lobsters alive.

This research has already impacted chefs in the United Kingdom. Many are changing their methods when cooking crab, lobster, and octopus. Instead of boiling live crabs or lobsters, they are stunning them so they are unconscious during the cooking process.

Is this totally ethical? Still, not quite. However, this is a step to making our food processes more ethical and actually considering the sentience of animals in our life processes.

We have to eat and many people eat crab, lobster, and octopus. Recognizing the sentience of these animals will connect us better with our food source and ultimately impact the way we think about animals, conservation, and a greener, more ethical world.

Meet The 10 Cutest Moths In The World 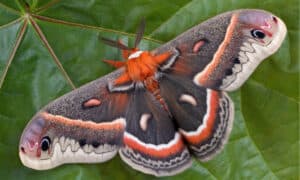