Written by Hannah Ward
Published: August 24, 2021
Share this post on:
More Great Content:
What Kills Bed Bugs Instantly?
How To Get Rid of Roaches Overnight
The 10 Largest Ants In The World
10 Poisonous Butterflies
5 Early Signs Of Bed Bugs: How…
Crickets vs Grasshoppers: 9 Main Differences Revealed

Often regarded as a lucky symbol, grasshoppers are one of the oldest types of animals in the world, having first appeared during the Triassic period 250 million years ago.  They are herbivorous insects and there are more than 11,000 species of them worldwide, with many more thought to be as yet undiscovered. But what is the largest grasshopper in the world? From grasshoppers that look like butterflies to ones that look like leaves, their appearance and their size can be vastly different between species.

Here we have ranked the 10 largest grasshoppers in the world by length.

The large marsh grasshopper is the largest grasshopper in the UK and is found in marshland and meadows that are prone to being wet.  They prefer to eat rushes and grass at the edge of the marshes where they also lay their eggs.  Large marsh grasshoppers are now only found in the New Forest and parts of Dorset are populations elsewhere in the UK have declined due to improved land drainage.   Males can reach lengths of up to 1 inch while females are much larger and can grow to be around 1.5 inches long.  While most are yellow or brown, they can occasionally be a vibrant pink color.

Next on the list is Calliptamus Italicus, which is a medium-sized grasshopper that is widespread across Central Asia, North Africa, and Western Europe. They can reach lengths of up to 1.02 inches for males and 1.57 inches for females.  Calliptamus Italicus is a type of short-horned grasshopper, which has a shorter antenna than other species do.  Their bodies are often grey or brown, and their wings are usually red or even pink.  Like all grasshoppers, they are a herbivore and therefore only eat plants, usually eating wild plants or sometimes crops.

The two-striped grasshopper gets its name from the two pale stripes that run from their eyes to the tips of their front wings.  Their bodies are usually either brown or green and they also have a black stripe down their back legs.  Two-striped grasshoppers can reach lengths of 1 to 1.6 inches and are found mostly in North America and Canada.  They eat a wide range of plants and crops and are classed as a pest due to the damage that they cause.  However, they do have quite a few predators, both in their egg stage and as adults, with small parasites, small mammals such as rats, and birds all preying on them.

Also sometimes known as the vegetable grasshopper, these grasshoppers can reach lengths of 1.2 to 1.6 inches.  They are usually found in tropical and coastal areas of Australia and can also often be found in gardens in those areas.  They are completely green and their bodies narrow at each end, often giving them the appearance of a leaf.  The appearance of northern grass pyrgomorphs is particularly helpful as they do not attempt to get away from predators, but instead rely on their camouflage to help them remain undetected.  These grasshoppers prefer to eat broad, leafy plants and generally do not do much damage to the areas they frequent.

Differential grasshoppers are large grasshoppers, with males reaching 1.5 inches and females almost 2 inches in length and they are widespread throughout Canada, Central America, and Mexico.  They are usually brown or green with a red or yellow antenna.  Differential grasshoppers are different to other types of grasshopper as their colour gets darker as they get older, so it’s easy to tell which ones are younger and which are older.  They often feed in swarms, which means that they cause a lot of damage to the crops that they eat and so are largely classed as a pest.  Young grasshoppers (nymphs) of this species mature much quicker than a lot of other grasshoppers and reach adulthood only 32 days after hatching.

The grey bird grasshopper, also known as the vagrant grasshopper, is found across South America. They are highly adaptable and can live in a range of habitats, including deserts, mountains, and forests.  They have a grey spotted appearance and females can reach lengths of around 2.6 inches with males being significantly smaller at around 1.8 inches long.  Grey bird grasshoppers are known as being one of the best fliers out of all grasshoppers and can fly for long distances, even across oceans.  They eat a wide variety of plants and vegetation and also crops such as wheat, oats, peanuts, and rye.

The horse lubber grasshopper is a large grasshopper that can reach a length of 2.75 inches and is found mainly across South America and Mexico. They have a distinctive appearance, with a black body, black and yellow front wings, and red rear wings.  Horse lubbers also have an orange antenna and orange markings on their head.  Most horse lubber grasshoppers cannot fly, instead, they rely on their long hind legs which give them the ability to jump long distances.  They also have a defense mechanism as they can produce toxins that they spray which are harmful to any would-be predators.

The eastern lubber grasshopper is also commonly known as the Florida lubber grasshopper and is found in the south east and Central America, particularly in Florida, Arizona, Georgia, and Texas.  Males can reach sizes of up to 2.15 inches while females are slightly larger and can reach around 2.75 inches, however, despite their large size they only have very small wings which are too small for them to fly with.  Eastern lubber grasshoppers aren’t particularly good at jumping either so they usually walk everywhere instead, which is why they have to rely on their defence mechanisms to protect themselves from predators.

One of the things that helps their defense is their bright colors which are used to signal to predators that they can protect themselves.  They are usually black with red, orange, or yellow markings which gives them a striking appearance.  They also hiss loudly at other animals and produce a thick foam that has a foul smell and taste.  Eastern lubbers are found in swamps, woodland, and ditches and eat a range of broad-leafed plants.

The Chinese grasshopper is widespread across China, Japan, and Indonesia.  Females can reach a length of around 3 inches while males are only 2 inches long.  They are usually green or brown and have wings that are colorless.  Chinese grasshoppers have extremely long legs which help them to jump long distances in one leap.  They are often eaten across China and are also thought to be very nutritional as poultry food.  However, they cause a lot of damage to crops such as sugar cane, rice, and cotton and are known as a pest species.

The largest grasshopper in the world is the hedge grasshopper (Valanga irregularis), which is also known as the giant grasshopper.  They are found in Australia, where they prefer the tropical and subtropical regions, often in forests or grasslands.  Females usually reach a size of around 3 inches, although some have been known to reach 3.5 inches, while males are much smaller and only reach 2.15 inches.  They have a wide variety of colors and markings with grey or green bodies being found most frequently, however, their wings can be a range of dots or stripes in grey, green, orange, or red.  Hedge grasshoppers are usually solitary and generally don’t form swarms, so therefore don’t cause much damage to plants or crops and are not classed as a pest species. 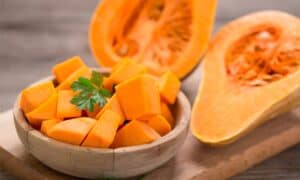 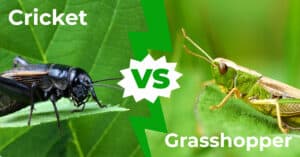