The 5 Biggest Spiders in Alabama

Spiders are eight-legged arachnids that can be found everywhere worldwide except Antarctica. Based on recent calculations, there are over 50,000 known spider species across the world. Contrary to popular beliefs, not a lot of spiders have venom. Most of them exist to control the insect population. All spiders, however, are carnivorous and either hunt insects or wait for them to land in their web. Although not all spiders create webs, they all produce silk, which they use to climb, defend themselves, construct nests, and encase their victims. Despite their many eyes (usually six or eight), spiders do not have the best eyesight.

Alabama is home to many animals in the United States, spiders included, with over 90 different species. Want to discover some of the biggest spiders in Alabama? Keep on reading.

Located in the southeastern United States, Alabama is the 30th largest and 24th most populous state. Alabama has the most waterways in the United States, steep hills, fertile flatlands, lakes, and rivers that are home to a lot of wildlife. The state has over 60 habitat types, including forests, woodlands, and wetlands which house over 4500 animal species from mammals to birds, bats, rodents, and even spiders. Many of the 92 spider species in Alabama are small. However, here is a list of some of the biggest spiders in Alabama:

Neil Young’s trapdoor spider can be found in Alabama, but it is also prevalent in some areas of Florida. The spider has legs that range in color from orangish-brown to pale to dark brown. It is a trapdoor spider of average size, with a length of 0.94 to 1.57 inches (2.4–4 cm). It has six eyes, similar to other trapdoor spiders, as opposed to the eight eyes that most other spider species typically have.

Also known as the Hogna carolinensis, the Carolina wolf spider is one of the biggest spiders in North America. The females can grow up to 0.86 to 1.37 inches (2.2-3.5 cm) long while the males grow up to 0.70 to 0.78 inches (1.8-2 cm) long. With darker brown patterns, this species is primarily light brown in hue. One of its most distinguishing features, and something you may notice if you come across one at night, are its reflective eyes. Also, females can be distinguished because they carry their egg sacs on their spinnerets.

The Carolina wolf spider does not spin a web to capture prey, like all wolf spiders. Instead, they hide in their burrows and ambush their victim. Unlike other spiders, the Carolina wolf spider is an expert hunter. It actively searches out its victim and attacks rather than waiting for it to become entangled in a complex web. Although it is possible to spot Carolina wolf spiders during the day, most people only see them at night because they are nocturnal. Also, despite their size, humans are generally unharmed by their bites.

The giant lichen orb-weaver, or Araneus bicentenarius, is a species of orb weaver in the family Araneidae and is indigenous to only certain parts of the United States and Canada. The giant lichen orb weaver earns its name from the impressive webs it create, which can measure nearly 8 feet in diameter. Additionally, it has a big abdomen, making it one of the heaviest orb-weaver species, supporting its well-deserved name.

They often have grayish-green bodies with black and white markings and orange legs with black rings. They can occasionally be mistaken for the European garden spider due to their similar coloring. However, the European garden spider is identifiable by its cross-shaped markings. Giant lichen orb-weaver spiders can reach lengths of 0.78 to 1.18 inches (2 to 3 cm) in females and 0.39 inches in males (1 cm).

Also, this species is nocturnal, and you can only find them sleeping during the day. They are also not venomous. Their bite can be likened to a bee’s sting, only relatively less painful.

The woodlouse spider (Dysdera crocata) is a species that preys primarily upon woodlice, and this is how it got its name. Woodlouse spiders originate from Mediterranean Europe, despite being common in Alabama. In warm environments, woodlouse spiders are typically found around or under logs, rocks, bricks, plant pots, and leaf litter. They’ve been discovered in homes as well. They spend the day in a silken hideaway made to encapsulate fissures in partially decaying wood while they occasionally erect tent-like constructions in the cleavages of various sizable rocks. The woodlouse spider does not create webs during the night when it hunts; instead, it spends time looking for prey.

They have exceptionally big chelicerae and six rather than eight eyes, unlike most spiders. They have orange-red bodies and legs, but the color of their belly is more yellowish-brown. While their bite is strong and capable of piercing through a pill bug’s hard shell, it is relatively harmless to humans. Adult females measure 0.43-0.59 inches (1.1-1.5 cm) in length, compared to 0.35-0.39 inches (0.9–1 cm) for adult males.

The green lynx spider, or Peucetia viridans, is the largest North American species in the family of Oxyopidae. The females can grow as big as 0.47 to 0.78 inches (1.2-2 cm), while the males are much smaller than the females. Typically found on green plants, green lynx spiders eat various insects that attack commercial crops and serve as natural pest management. The green lynx prefers the tops of low shrubs and herbaceous plants in open settings like meadows, grasslands, farms, and gardens. They also prey on beneficial insects like honey bees at the same time. Therefore, effective green lynx spider pest control is necessary to stop the spiders from causing more harm than good.

The 5 Biggest Spiders in Nevada 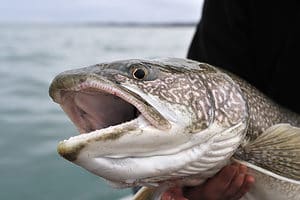