The Flag of Cameroon: History, Meaning, and Symbolism

Cameroon (Cameroun in French) is a west-central African country because of its strategic placement at a junction between both parts. Cameroon is officially known as the Republic of Cameroon (République du Cameroun), and its multiethnic population is one of western Africa‘s most urbanized. Before Cameroon was recognized as a sovereign state, its inhabitants included the Sao civilization around Lake Chad and the Baka hunter-gatherers in the southeast rainforest.

The country is relatively small and is home to around 27 million people divided into over 200 ethnic groups who speak over 250 languages. Nevertheless, the nation is primarily home to three linguistic groups: people who speak Bantu in the south, those who speak Sudanic in the north, and the population which speaks Semi-Bantu languages, primarily in the west. In the country’s south-central region sits Yaoundé, which serves as the capital.

The nation’s name was derived from Rio dos Camarões (“River of Prawns”) and was coined by Portuguese explorers in the 15th and 16th centuries. Just like the peculiar origin of the country’s name, there are other exciting things to learn about Cameroon, one of them being that the country was colonized more than once. How did this colonization affect the country’s flag choice? Keep reading to find out.

Based on compelling archaeological findings, there is evidence that people have inhabited Cameroon for at least 50,000 years. The Pygmies, also known locally as the Baguielli and Babinga, are the oldest people in the nation. These people started out as hunters, hunting and gathering for thousands of years in small bands in the southern forests. However, their numbers have consistently decreased as the health of the forests they live in has deteriorated. The Germans colonized Cameroon in 1884 and held it until 1916. Following its loss in World War I, the nation was declared a mandated territory and partitioned between France and the United Kingdom in accordance with League of Nations directives.

Cameroon is the 53rd-largest country in the world, with an area of 183,569 square miles. Cameroonians are a diverse ethnic group with over 250 spoken languages. Despite having that many languages, there are two official languages in Cameroon. Languages from Europe were spread through colonization and missions. German was the official language throughout the colonial era. Still, English and French have since taken their place after the country was colonized by the French and the British and continue to be recognized as the official languages of Cameroon.

Aside from being multi-ethnic, Cameroon is also multi-religious. More than a quarter of the population is Protestant, and about two-fifths are Roman Catholic. The rest of the country’s population is divided between Muslims, animists, and other smaller traditional religions. Despite being united, there are still certain distinct differences between the north and south of Cameroon. One of the primary differences between them is cultural division. The north is inhabited primarily by Arabic and Sudanic citizens that rarely travel except when looking for grazing land. While the north is predominantly Islamic, the south follows Christianity and some other African traditional religions.

History and Symbolism of the Flag of Cameroon

After Cameroon became a unitary state, the national flag was adopted in its current form on May 20, 1975. It has a five-pointed star in the middle and is composed of a vertical tricolor of green, red, and yellow. After being promised independence, the country’s local government started debating a potential national flag in 1957. There were several design options for the flag, with one of the most frequently suggested being the prawn that gave the nation its name. The French tricolor served as an inspiration for the final flag chosen by the legislature, which consisted of three equal vertical stripes.

The traditional Pan-African colors are used on the Cameroon flag, which makes Cameroon the second African country to adopt these colors as its official flag colors. The yellow represents the sun as well as the northern savannas of the country, while the green represents the southern woods of Cameroon. The star in the center is known as “the star of unity,” and the red stripe it sits on in the center is supposed to represent unity- it symbolizes the relationship between the north and the south.

How Did Colonization Affect the Flag of Cameroon?

Cameroon established its first flag when the German Empire colonized the region in 1884. It had an elephant head and red shield in the middle of a black, white, and red horizontal tricolor. In addition to a flag, there were discussions on establishing an official coat of arms, but as World War I broke out in August 1914, all plans for establishing the new colonial coat of arms and flags were put on hold. As these became League of Nations territories following Germany’s defeat in 1918, it was evident that neither the coat of arms nor flags would become the official symbols of the then-German colonies.

Shortly after Germany’s loss, Cameroon was shared between the French and the British. The flag of the British Cameroons was a blue British Ensign with the Union Flag in the top left corner and the British Cameroons’ insignia towards the center-left. The part of the country under French rule was part of French Equatorial Africa and had a different flag. Their flag was a simple vertical blue, white, and red tricolor.

Two five-pointed gold stars were added to the green section of the green-red-yellow tricolor in the top left corner in 1961, the year British South Cameroon gained independence. However, the two stars were taken out, and a larger, five-pointed gold star was added in their place in 1975, giving the flag a new meaning. The flag adopted in 1975 is still the same flag in use to this present day.

Click here to learn about every single flag in the world! 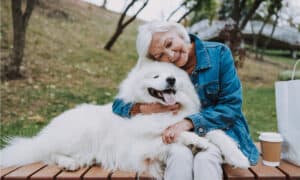