Written by Angie Menjivar
Published: September 26, 2022
© iStock.com/fotokris
Share this post on:
More Great Content:
What Kills Bed Bugs Instantly?
How To Get Rid of Roaches Overnight
Carpenter Ants vs Black Ants: What’s the…
Where Do Bees Go In The Winter?
The 10 Largest Grasshoppers In The World
Types of Beetles: The Complete List

It’s swamp country, the lights are glittering with mystery, and the atmosphere is surreal. It’s Disney World and walking through the park is already like stepping into an alternate universe full of wonder. When you realize that you’re not violently swatting mosquitoes away like you would anywhere else in swamp country, you might think that there truly is a magical quality to this theme park, after all. But how does Disney prevent mosquitos in their parks?

Well, not to completely burst your bubble, but there is no magical portal at the gates of Disney World that keeps mosquitoes out. There is no magic fairy dust protecting the park, and you are certainly still in the hot, feverish weather of Florida where swamps are everywhere and gators thrive. Disney takes a comprehensive approach to keep mosquitoes away, but it certainly isn’t anything too out of this world. It’s really about “who you know,” and Walt Disney happened upon just the right person.

The Truth Behind No Mosquitoes at Disney

Ultimately, it’s all about pest control. And who better than a man who had previously served as governor in a location that was inundated by mosquitoes carrying malaria? It was the Panama Canal Zone, and it was Major General William “Joe” Potter. Potter was an engineer focused on trying to control one of the worst infestations of mosquitoes.

He was in charge of controlling those swarms and he happened to meet Walt Disney at the World’s Fair. Of course, he mentioned that he was involved in pest control and gave some anecdotes. Walt hired him without thinking twice about it. He knew that the park he was planning to build would be in an environment that required not just any pest control, but expert and precision pest control.

It may have been a chance encounter or one that was destined, but ultimately, Walt Disney procured the right talent at just the right moment before building the park. It was Major General Potter who met Walt in 1964 and became his top-notch pest control expert. To this day, you can see his name “General Joe Potter” on one of the boats, somewhere between the ticket and transportation center and the Magic Kingdom.

You’ve likely heard that prevention is much better than having to deal with an infestation. There are different methods that Disney employs, but one of the most effective is using running water. The thing is mosquitoes and their eggs need standing water. If there is no still water anywhere, the mosquitoes don’t feel that they have the right environment for their eggs. Therefore, the park surges with running water 24 hours a day. If the environment is not viable for mosquitoes or their eggs, mosquitoes won’t try to swarm there.

Now, this is still swamp country and you know that swamps have still water. Potter, who knew this, started by ensuring that there would always be draining ditches. This removed all that swamp water and transform it into land that could be built upon. These ditches are still in use today and continue to help keep the water in Disney World and other parks in constant motion.

As a visitor, your eyes are twinkling with all the eye candy and actual candy that surrounds you at Disney World. But if you take a moment to notice your environment, you’ll realize that there is no still or stationary water anywhere in the park! You will only ever see moving water. Even if you spot a body of water, you’ll notice that there’s a little fountain that keeps it moving. These are all details that Potter added to help create the wonderful experience you can have today.

How Disney Architecture Contributes to a Mosquito-Free Environment

It’s not just about water; it’s also about architecture. Imagine if Disney World was built with structures that have any chance of collecting still water. The maintenance would be near impossible! Instead, the architecture was designed so that when those crazy Florida rainstorms come down, the water always flows off the buildings. Yes, you’re dazzled by the castles and all the other buildings spread throughout the park but if you take a moment to notice, you’ll see that they have all been built so that water easily glides off them. Still water is ultimately the culprit that helps mosquitoes to thrive. The architecture at Disney World was built so that mosquitoes never feel safe.

Disney’s Landscaping and Other Pest Controls

Already, you have moving water and architecture built to keep mosquitoes from laying eggs anywhere in the park. Now, the third aspect that keeps mosquitoes away is the landscaping. If you walk through the park, you’ll see plenty of greenery, but did you consider that all of it has been placed there intentionally? First, the plants are chosen only because they’re the types of plants that don’t allow water to puddle around them. A puddle is a body of still water, and remember, that is not something you want at Disney World.

Additionally, when there are bodies of water, even with fountains keeping them running, there won’t be any water lilies. Water lilies provide an optimal place for mosquitoes to hide under, so Disney parks make sure to keep those away.

Along with intentional landscaping, Disney prevents mosquitoes by incorporating sprays. We’re not talking about the pest control that gets toxic. This is a safe haven for adults and children, so Walt Disney never wanted to use any heavy chemical spraying around these parks. Although pesticides can be incredibly effective at keeping these critters away, Walt said no. Instead, he decided to go for something more natural. They use incredibly effective yet exceptionally unusual insect repellents.

For example, mosquitoes are not fans of garlic. Therefore, one of the insect repellents used at these parks is liquid garlic. Although you won’t be able to pick up on the smell while walking through the park, mosquitoes are definitely repelled by it.

Nearly Invisible! Can You Spot This Camouflaged Crocodile? 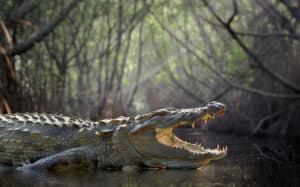