The Longest Biking Trail in Hawaii

One of the most sought-after destinations in the world is Hawaii. Unique among America’s states for being an archipelago (collection of islands), Hawaii comprises 8 major islands as well as numerous atolls and islets. With breathtaking natural beauty and gorgeous ocean views, Hawaii is well worth exploring by any means. For cyclists, there are many options, from easy biking trails to more strenuous ones. For a challenge, check out the longest biking trail in Hawaii!

What is the Longest Biking Trail in Hawaii?

The longest biking trail in Hawaii is the Paia to Haleakala trail. Located on the island of Maui in the Hawaiian archipelago, it runs for 69.4 miles out and back. One way, it runs for approximately 35 miles. The trail begins in the small seaside town of Paia and reaches its climax in Haleakala National Park at the Haleakala summit. Then it returns to Paia.

The Paia to Halekala Trail

The Paia to Haleakala trail is paved the whole way and shares road space with motorized vehicles. It is an incredibly scenic drive, which means vehicles may frequently pull in and out of the main traffic. Cyclists should be aware that this is not a dedicated biking trail. It also passes through fairly remote or isolated regions that require careful planning and preparation.

The trail begins in the town of Paia and winds through the Haleakala National Park until it reaches the summit of the volcano Haleakala, its namesake. The trail varies in difficulty, with the most difficult portions within the park’s boundaries.

The trail to Haleakala begins in Paia, a seaside town on Maui’s northern coast, and runs for approximately 22 miles before reaching the national park entrance. The town of Paia contains approximately 2,500 people. Despite its small size, it caters to tourists of all kinds and therefore has a good variety of dining options. Cyclists will be able to stock up on supplies as well as take in the lovely ocean scenery along the coastline.

Heading out of the town, grades vary somewhat, occasionally becoming steep, especially during the last section approaching the Haleakala National Park. Payment to enter the park is mandatory, though it is less expensive for cyclists than motorized vehicle passengers.

Haleakala National Park is a beautiful and sacred wilderness area in Maui, covering 33,265 square acres. It is extremely popular with tourists. The journey from the park’s entrance to the summit is approximately 12.5 miles. This is the most arduous stretch with sharp elevation gains and lowering temperatures. The air will also be thinner, making breathing more difficult. Cyclists should be prepared for a slower pace during this portion of the trail.

For those wishing to make a multi-day journey out of it, camping options are available in Haleakala National Park. However, campers will need to make reservations in advance to ensure a spot at the popular campgrounds. Also, there is a 3-night limitation on camping in the park per month.

The summit of the volcano Haleakala is well worth the trip. Cyclists can take a much-needed break to admire the far-flung vistas and perhaps explore the surrounding wilderness. Both volcanic landscapes and sub-tropical rainforests contribute to the island’s beauty. Many tourists come to Haleakala specifically to view the sunrises and sunsets from the summit. It is necessary to book sunrise viewings in advance as they are so popular.

Be aware that there are no options within the park for replenishing food supplies. Cyclists must bring enough with them to last the journey in and out. The return journey to Paia will be much less challenging as it is mainly downhill.

The trail from Paia to Haleakala is arduous and should not be attempted by inexperienced cyclists. Not only is the trail lengthy, but the elevation gains are significant. Out and back, it takes the average cyclist over 33 hours to complete. This means at least one overnight stop is necessary for those attempting the entire trail.

Some people only begin the trail in Haleakala National Park, driving the rest of the way there. This is where elevation gains become sharp. At times the grade can be punishing, so cyclists must be aware of their own limitations and bring plenty of water and other supplies. Because of the elevation gain, temperatures are usually significantly colder near the top of Haleakala than near the bottom. In addition to this, the air is thinner the higher you go.

As this is an extremely popular destination, cyclists must always be aware of the traffic around them. Motorized vehicles use the entire trail; since this is a scenic route, be aware that the scenery may distract drivers. Use extra caution around vehicles.

Wildlife on the Paia to Haleakala Trail

The state of Hawaii is rich with natural wonders, and the island of Maui is no exception. The surrounding Pacific Ocean, in particular, offers a stunning array of wildlife. Estimates put the number of species in and around Hawaii at over 21,000, making it one of the most diverse states in America.

Cyclists may have a chance to spot ocean life at certain points along the trail, but especially at Paia. Marine animals around Hawaii include the official state mammal, the Hawaiian monk seal. This seal is native to the Hawaiian islands. Not to be outdone, however, is the humpback whale, Hawaii’s official state marine mammal, and overall official state animal. The humpback whale has great significance in Hawaiian culture. Recent conservation efforts have successfully brought this marine wonder back from the brink of extinction. Today, it carries the status of Least Concern.

For those eager to brave the Hawaiian waters, it’s important to note the presence of several shark species around the island of Maui. These species include great white sharks, tiger sharks, white-tip reef sharks, and Galapagos sharks. Though there are no snakes in Hawaii, one sea snake makes it home there, the yellow-bellied sea snake. Its bright yellow markings offer a warning to predators that it is highly venomous and dangerous to approach.

On the island of Maui itself, cyclists may encounter iconic animals such as the nene goose, the mongoose, the axis deer, or the hoary bat. Birds like the Maui parrotbill and the ‘akohekohe all call the island home.

Though Hawaii is famous for its beauty and hospitality, it also offers cyclists many ways to explore its natural wonders. Next time you visit, don’t forget to check out the Paia to Haleakala trail!

Deer Season In Mississippi: Everything You Need To Know To Be Prepared 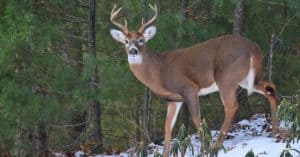