Where do the biggest spiders in the world live? The answer is that they live in many diverse locations. This list will tell you more about them, their size and where they live.

For our intents and purposes, the leg-span measurement at maturity has been used to determine the placings of the biggest spider in the world.

If you travel to the sand dunes of the Arava Valley of Israel and Jordan, watch for the Cerbalus aravaensis spider. It is the biggest spider known to the area. The Cerbalus aravaensis isn’t the biggest spider in the world, but it’s close. The spider is hard to miss because its 5.5 inch leg span makes it hard to miss an object crawling that is its size. Salt mining and agricultural land conversion threaten its habitat.

This nocturnal arthropod builds homes in the sand, where it hides from its predators. These homes have trap-like doors to protect these spiders that are some of the largest spiders in the world.

There are at least eight subspecies of this spider mainly lives in Brazil but also in Costa Rica to Argentina.

It is usually brown, and it may have a black spot on its belly. These are some of the largest hairy. The hairs on these big spiders often make the size of this option look even bigger. These nocturnal arthropods who live under logs dine on insects, small amphibians, reptiles, and mice.

The light tan camel spider has about a 6 inch leg span and is one of the biggest spiders. It is one of the fastest spiders as it often moves at speeds approaching 10 miles per hour.

These arthropods sometimes emit a buzzing sound, but they have no venom. They aren’t the largest spider in the world, but these big spiders are eye-catching.

These spiders living in Iran and Iraq feast on insects, rodents, lizards, and small birds. The jaws on these spiders can make up to 33% of their total body length, and they use them to clamp down on their prey.

You may have heard that these giant spiders will chase people. The fact is, they aren’t chasing you. These spiders like the shade. These spiders are chasing your shadow, not you. Camel spiders have a lifespan of about a year and only has two eyes.

The Columbian giant redleg spider has about a 7-inch leg span. This spider lives in Colombia and parts of Brazil. It has bright reddish-orange hairs on its legs.

While males live to be about 4 years old, females often live to be 20 years old. This spider species is huge, but it still isn’t the largest spider in the world.

This nocturnal arthropod is very nervous. It will spin and start bobbing up and down. If the threat does not leave, it will use the hidden thorny spikes on its back legs in the direction of the danger.

These big spiders will finally use its fangs to bite its victim.

Biologists have only found the Hercules baboon spider one time, but they collected it in Nigeria over 100 years ago. You can see it in London’s Natural History Museum. This East African arthropod takes its name from the fact that its rusty-brown body looks like a baboon. It may be the heaviest spider ever captured.

As one of the scarier big spiders species in the animal kingdom, this Hercules Baboon Spider is in fact a venomous tarantula that was found mainly in Africa. This spider was once known to make burrows in grasslands and dry scrubs. They were known to make deep shelters to protect themselves from the harsh weather.

They were said to prey on insects, bugs, and other small spiders. They aren’t the biggest spider in the world, but you wouldn’t want to run into one if you have a spider phobia.

The Face-size tarantula has about an 8 inch leg span. This spider found in Sri Lanka and India lives in old buildings and decaying wood. Its diet consists of birds, lizards, rodents, and snakes that are often bigger than this animal’s length.

This tarantula has daffodil-yellow banding on its legs and a pink band around its body. Scientists did not discover it until 2012, and biologists think there may be even more unknown arthropod species living in the northern area of Sri Lanka. These big spiders have a massive leg span, but still isn’t the largest spider in the world.

Still, it is dangerous for them to explore there because of the ongoing conflict.

The fourth biggest spider in the world is the Brazilian giant tawny red tarantula, which lives in Brazil, Uruguay, Paraguay, and Argentina. The fourth leg on this brown spider can be up to 2.3 inches long while its whole body is only 2.5 inches long.

Like its other cousins in the Tarantula family, this arachnid’s abdomen is lined with hairy darts to ward off predators. The kind it possesses are capable of giving foes of both the invertebrate and vertebrate variety pause, and can be especially potent against mammalian attackers.

The Brazilian salmon pink birdeater spider has a 10 inch leg span, but isn’t the largest spider in the world. As the name suggests, this spider lives in Brazil, but you may also see it in Argentina and Paraguay. It has a dark brown body with bright salmon blotches on it making its length look even more intimidating.

First, this spider uses its fangs to inject venom into its prey. This venom kills the prey. Then, it releases fluid to digest the prey partially. While it is not listed as endangered, its Atlantic Forest habitat is constantly shrinking because of human developments.

The goliath bird-eating spider is the largest spider in the world by mass, and has an 11 inch leg span. Scientists discovered the first one in 1804. This brown-to-light-brown arthropod lives in Suriname, Guyana, French Guiana, Venezuela, and Brazil. This nocturnal arthropod lives mainly in the Amazon rainforest.

It weighs between five and six ounces. While people have observed a few of the largest ones eating small birds, like hummingbirds, most of their diet consists of insects and small terrestrial vertebrates. You will not usually see one dining because they drag their prey back to their hidden nests before eating.

The largest spider in the world by leg span is the giant huntsman spider coming in at 12 inches. It does not build a spiderweb to catch its prey. Instead, it hunts its prey down. While you can see huntsman spiders at many different worldwide locations, the giant huntsman arthropod only lives in caves in Laos. This arthropod discovered in 2001 has crablike legs with twisted joints, so they move like a crab.

This arthropod typically lives under decaying wood. When it spots its prey, it can move up to 3 feet in a second. These spiders have an elaborate mating ritual. Then, the female lays up to 200 eggs in a sack-like cocoon that she guards fiercely. After three weeks, when it is time for the spiderlings to hatch, she will help tear the cocoon open. She may stay with the spiderlings for several weeks.

Even if you are generally not afraid of spiders, these 10 are big enough to scare you. They are amazing arthropods that need you to help protect their habitat. Even though you probably don’t want any of these arachnids anywhere near you understandably, they are each a crucial and fascinating piece in their own ecosystem.

Top 10 Biggest Spiders in the World

Maybe you find spiders so scary that you can’t look away, or maybe you genuinely love them. Either way, here are some more great spider reads. 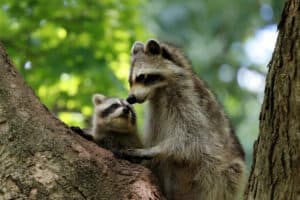