The Triassic Period: Animals, Plants, And When it Happened

The Triassic Period, Animals, Plants, and When It Happened

The evolution of life on earth can be traced through the different geological periods of history. These periods show crucial historical moments and the end and start of an era or species. The geological periods can further be divided into periods that give more details of evolutionary changes.

The Triassic period was the first in the Mesozoic era, a tropical and humid era. Each era and subperiod has an approximate amount of years it spanned for. The periods also have unique attributes that separate them from other periods. The unique attributes can be some species known only to exist at that point in history or an extinction event.

The Triassic period proceeds from the mass extinction event as the Permian period ended. It was a period that saw life on earth evolve out of the waters and diversify on land. The continents were still one supercontinent.

This article will discuss the Triassic period and its animals and plants. We will also discuss other factors that contribute to or remove from life during this period.

What Is the Triassic Period?

The Triassic period was the first of the three periods in the Mesozoic era. This era started with desolate earth from the great extinction. About 90% of species went extinct. This extinction gave room for the evolution of new species and the repopulation of survivors of the Great Dying.

The Triassic period saw life evolve to fit the new realities of earth. Life on earth diversified and evolved new creatures. These new creatures include small mammals and the earliest dinosaurs. This period dated between 252 to 201 million years ago. The Triassic period has three sections that feature epochs of the period. These epochs are:

It was a period when the archosaurian animals, which dominated for periods to come, evolved. Such reptiles include the famous dinosaurs. As the ecosystems replenished, life on earth started to evolve and diversify on land. The lack of coal in the initial few million years of the Triassic period shows how long it took plants to recover from the Great Dying.

This period featured a one-world continent style as Earth’s had one vast landmass. This vast landmass is a giant supercontinent called Pangea. Pangea is the landmass from which today’s continents broke off and separated over time. The Pangea was a pole-to-pole landmass with a desert in the middle.

The Pangea had a vast body of water around it called the Panthalassa. While the continent started to rift during this period, it did not split. The connection of the continents in the Pangea made movement unrestricted for land animals that evolved. Moss and ferns provided cover on the ground as there was no grass during this period.

The supercontinent began to drift apart about 199 million years back. It started when the tectonic plates started splitting in two. The division made Gondwana for the south and Laurasia for the north. Gondwanaland comprised Australia, India, Africa, Antarctica, and South America. Laurasia consisted of Europe, Asia, and North America.

The poles lacked ice caps, and the coastal areas were hit with monsoons. The dry interior of the Pangea persisted due to the circulation patterns of the ocean, which kept it isolated.

As the Tethys ocean filled the Pangea, it induced the splitting of the Pangea. Failed attempts at splitting the Pangea created rift valleys in Africa and North America. These rift valleys are abundant with red sediments that house Triassic life’s most preserved fossils.

Epochs of the Triassic Period

As stated earlier, the Triassic period has seven epochs or sub-periods within it. These epochs are classified into early, middle, and late Triassic epochs. The epochs include:

This epoch is the first epoch of the Triassic period dating between 251.9 to 251.2 million years ago. The proterosuchids and lystrosaurids were the only dominating land animals of this epoch. Most parts of the planet had no life and were hot, dry, and deserted. Biodiversity on a global and community scale was low in this epoch.

This epoch is the second epoch of the Triassic period, which dates between 250 to 245 million years ago. This epoch comes from the Olenek (Olenyok) river in Siberia. It can be further divided into Smithian and Spathian substages.  The first archosaurs’ ancestors evolved during this epoch.

This epoch lasted between 247 to 242 million years ago. It gets its name from a region with limestone deposits by the Anisus river. It had six biozones of ammonite species.

This epoch lasted between 242 to 235 million years ago. The Ladini tribe of northern Italy inspires its name. It can be further divided into the Longobardian and Fassanian substages.

This epoch lasted between 237 to 227 million years ago. This period isn’t bordered by large extinctions but has an event called the Carnian pluvial episode. This episode experienced extreme rainfall that led to biotic radiations and some notable extinctions. The origin of its name is attributed to three sources; Carinthia in the Austrian region, the Carnic Alps, or the historical Carnia of northern Italy.

This epoch lasted between 208.5 to 201.3 million years ago. It gets its name from the Rhaetian Alps of Austria, Italy, and Switzerland. This stage was documented in 1856 by Albert Oppel, a German paleontologist, and Eduard Suess, an Austrian geologist.

Animals of the Triassic Period

Marine life was filled with ammonites, sea urchins, and mollusks. These animals were part of the survivors of the Permian extinction. They diversified, and the first corals evolved during this period. There were many species of invertebrates than in previous periods.

Other marine animals of the period include scallops, snails, and clams that evolved in this period. They became the most diverse shelled invertebrates in the waters. Amphibians continued to diversify, with labyrinthodonts being one of the common ones of the time.

They had flat heads and sharp teeth with small limbs. Lissamphibians evolved around 250 million years ago and were placed in freshwater. There were larger amphibians called Temnospondyls. They could grow up to 13 feet.

Dinosaurs didn’t evolve in the early stages of this period. Land animals included vertebrates like the Lystrosaurus, a small herbivore reptile with mammalian features. It was a widespread land vertebrate of the time. The ichthyosaurus evolved and ruled the seas between 250 to 246 million years ago.

Dinosaurs first evolved about 240 million years ago. As the Triassic period ended, the balance of dominance shifted between the archosaurs that evolved during the time and the mammalian reptiles. Coelophysis was one of the first dinosaurs between 225 to 220 million years ago. It was small at about 3 meters long and 27 kg weight.

The first giant dinosaur evolved about 210 million years ago. This herbivore dinosaur was the Plateosaurus which means ‘flat lizard.’ Archosaurs became the dominant species of this period, with dinosaurs and other crocodilian predators being on top.

Plant Life During the Triassic Period

This period started significant changes in plant evolution. Pine trees and other conifers evolved during this period. Plants like ferns, horsetail rushes, seed ferns, and cycads were already flourishing into this period. Plants of this period did not grow to the heights of modern trees, and they were covered in a thick waxy substance.

The theory is that this helps prevent the plants from drying due to the hot climate. These coverings could have caused the rounded blunt teeth of animals of the time. Other plants of this period include;  mosses, club mosses, liverworts, ginkgophytes, lycopsids, bjuvia, filincophytes, and araucaria.

There was a minor extinction between 213 to 208 million years ago at the end of this period. This extinction was a result of an asteroid’s impact or the climate’s cooling. This extinction killed many animal species and plant species. Labyrinthodonts, conodonts, amphibians, and marine reptiles, excluding ichthyosaurs, went extinct. 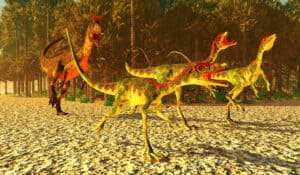 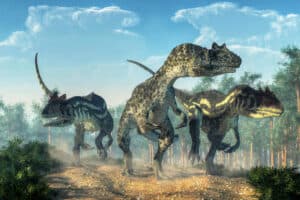