Viperidae is the scientific name of vipers, which encompass a wide range of various snakes. The different types are native to different parts of the world. Green vipers, like all other vipers, are venomous snakes. One of the characteristics of vipers that is easy to spot (though hopefully not too close) is the length of their fangs. They’re long and can rotate, which sounds unreal—but it’s real.

They’re also hollow because otherwise, how else would the venom travel? Their venom glands are located just behind their eyes, next to their upper jaws. To let their ridiculously long fangs work their poisonous magic, their jaws open up to 180 degrees.

However, not every viper bite is venomous. The venom they secrete takes a while to develop, so in an effort to preserve this killer juice, they may sometimes bite in defense but without the aim to kill. In this video, you get a unique look into what a green pit viper’s open jaw looks like—all from the comfort of your home.

Within the first second, you’re already watching in slow motion as this stunning green pit viper strikes, its jaw opening menacingly wide. It is wrapped up on a thin tree branch, and with its strike, moves its upper body forward, its jaw still wide open.

It reaches forward toward the left side of the screen before pulling its body back and closing its gaping mouth. As if to add to the drama, you can hear the thunderstorm in the background as flashes of lightning erupt on screen.

Even though the video is in slow motion, it’s hard to see how this viper’s incredible fangs work. Because they’re rotatable, they lay against the roof of its mouth when its mouth is closed. When it strikes and opens its mouth, the hinged fangs move away from the roof of its mouth and into a vertical position so it can bite.

Just as it pulls itself back and starts closing its mouth, you can barely make out how the fangs go back into their resting position. The video loops three times so you don’t have to rewind it and can keep your eyes peeled to spot the fangs. Even if snakes terrify you, it’s hard to deny that these creatures are truly mesmerizing.

Up Next: More Spellbinding Snake Footage 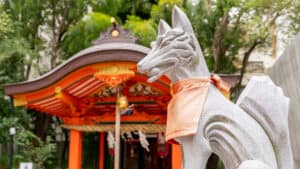