Written by Kirstin Opal
Published: August 21, 2022
© kyslynskahal/Shutterstock.com
Share this post on:
More Great Content:
Leopard vs Jaguar - The 7 Key…
What Do Leopards Eat?
How Many Leopards Are Left In The…
10 Incredible Amur Leopard Facts
Next Level Leopard Somehow Catches an Eagle
Leopard vs Cheetah - The Five Key…

One of the largest wildlife reserves in Africa is Kruger National Park, located in northeastern South Africa. The Big 5 – lions, leopards, rhinos, elephants, and buffalos—as well as other wild creatures are abundant along with several bird species including vultures, eagles, and storks.

Maasai Sightings is a popular Youtube channel that showcases all sorts of animal experiences from within the popular park. This time, they captured a naive, young leopard who wasn’t too aware of his surroundings.

In the video, we spot a leopard cub stalking a herd of impala. The leopard stalks or ambushes its prey in order to catch it. It makes an effort to approach its target as closely as feasible in either situation. Following a swift, explosive charge, it pounces on its prey and bites it in the neck to finish it off.

Because male leopards spend a lot of their time patrolling their territories, when something is amiss, they quickly notice. One adult leopard saw something that didn’t quite belong on his land – the young leopard. While these large cats can coexist with others, males are incredibly dominant and avoid any other male cat near their herd.

Leopards are highly territorial, and they use their waste, urine, and cheek-rubbing on trees to indicate their territory. They may also leave scrape marks on the ground, trees, or logs. By doing this, they signal to passing leopards that the area they are in is populated.

Leopard battles may be bloody. By grabbing their rival with their front legs and shredding with their back legs, they try to tear into one another. A flurry of sounds accompany the revealing of claws and teeth along with their associated sounds. The adult cat in this situation slowly closes in on the young cub sitting on a dirt path.

The younger cat is so focused on the impala, that he doesn’t even notice the danger approaching from behind! As soon as the two animals make eye contact, all bets were off. They instantly attacked each other and eventually the younger leopard was chased into the woods.

Leopards are the toughest cats in Africa, pound for pound. Despite being the smallest of the “big cats,” They are so powerful that they can lift a cadaver weighing up to 110 pounds into a tree! I don’t know about you, but I wouldn’t want to get on a leopard’s bad side!

A viewer comments this under the footage of the two cats: “I can never get bored watching animals doing what they do best, being the animal they truly are and filling the niche of Mother Nature in which they belong.” We couldn’t agree more! Check out some of our favorite wildlife videos below! 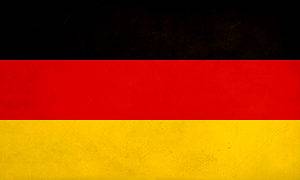 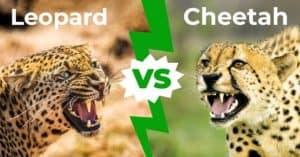