Stu Porter/Shutterstock.com
Share this post on:
More Great Content:
The Largest Great White Sharks Ever Found…
How Many Alligators Live in Lake Worth…
Elegant Bird Tries to Steal Eagle's Meal:…
Whale Materializes From Nowhere in Incredibly Photogenic…
Where Does The Colorado River Start and…
Discover the Biggest Shark Ever Caught Off…

Lions are well-known predators and there are few animals that have an instinct to approach them when they’re near. Mostly, other animals know to create distance between themselves and lions, especially when there’s more than one present.

This video opens with a view of a male lion crouched down on some dirt in front of a watering hole. He can be seen lapping up the muddy water before the camera switches over to his female counterpart, that can also be seen crouched down and lapping up some water.

Both the male and female lions have remnants of blood on their chins; they’ve likely decided to hydrate post-kill. The camera pans back to the male lion as he continues drinking water. Suddenly, you can see something small moving in front of him in the water.

As it approaches, you can make out the turtle’s back and head poking out of the water. It’s about the size of the lion’s front paw. The turtle fearlessly approaches the lion, meeting him right against his mouth. The turtle seems to go after the lion’s chin—and while the lion is a little bothered, he continues lapping up water anyway.

Realizing the lion isn’t taking the hint, the turtle swims up against the lion’s mouth a little more aggressively this time. The lion gets up and moves to another part of the watering hole to continue drinking water.

The next scene is similar. Except, this time the camera is on the female lion. She spots the turtle more quickly than the male lion did but continues drinking water. She very clearly doesn’t perceive it as a threat.

As she keeps drinking, this brave little turtle keeps swimming right in front of her mouth, where she’s making waves as she laps the water up with her tongue. The waves move the turtle away, but it keeps swimming determinedly toward the lioness.

Next, we’re back to the male lion. He has found another spot to lap up water, but the turtle has decided to let him know, once again, that he is not welcome in its watering hole.

This time, the turtle reaches forward against the lion’s chin and as the lion gets up and starts moving away, the turtle gets on land to chase it further down the dirt path.

So far, the turtle hasn’t had any luck getting the female lion to stop lapping up water. The turtle returns to her, and they face off. The lioness licks her lips and, in the process, her tongue swats at the small turtle. The turtle quickly retracts its body back into the water.

Nevertheless, the turtle holds its ground. The turtle approaches the male lion one last time; the lion can be seen drinking again at another spot. You can see that he is peering over suspiciously at the turtle trying to get as much hydration as possible before the turtle reaches him.

Finally, the male lion gets up and he can be seen panting, with water dripping down his chin. He walks off and away from the camera’s view.

That was impressive security on that small turtle’s part. He kept the boldness of a bully throughout the clip!

Up next, check out other courageous encounters:

How High Can Mice Jump? Yes, This Is A Thing 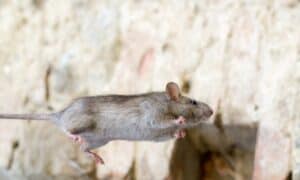