Discover the 12 Best National Parks to Visit in January

January may not seem like a good month to visit many national parks because it’s winter and much of the United States is frigid. The fact is, national parks are most busy during the summer season because that’s when recreational activities are the most accessible.

However, if you’re willing to travel, you’ll find that a number of national parks across the U.S. have some of their best weather in January. (Hawaii in January, what could be better?)

In addition, many national parks even in more northerly environments are a unique experience during the winter. Activities like skiing and sledding can take the place of hiking!

So if you’re looking for a less crowded experience, we have a number of travel ideas tailored just for you! From the wintery landscapes of California’s Lassen Volcanic and Montana’s Yellowstone to the dreamy cliff dwellings of Mesa Verde National Park, there is truly something for everyone on this list.

So, whether you’re hoping to snorkel in the Caribbean, observe stars in California, or just want to break free from winter fever, these 12 national parks are the best in January.

Haleakalā National Park is situated in Maui, Hawaii. Since Haleakala is located on an Island, its temperatures tend to be the same throughout the year. However, January is the best bet if you are looking for cooler temperatures and an amazing stargazing experience.

Haleakala is also home to the endangered Hawaiian geese and the dormant Haleakala volcano. The park has freshwater pools and waterfalls in the middle of the bamboo forests of the coastal area of Kipahulu.

And if you’re an early riser, Haleakalā is Hawaii’s most famous sunrise spot.

Lassen Volcanic National Park in northern California is a wonderful place to visit in January. It’s home to several volcanoes, clear mountain lakes, and steaming fumaroles. Lassen Volcanic is worth the trip in January since it offers snowy views of the surrounding wilderness and mountains.  Winter activities include snowshoeing, skiing, and the area around the visitor’s center is even a popular sledding spot.

Steam vents become smokier while the lakes are crystalline during January. You may also want to explore the flower-filled meadows of the Lassen if you’re heading out in another season.

Saguaro National Park is regarded as a national treasure in southern Arizona. Due to its hot climate, January is the best month to visit the park. Temperatures are often between 50℉ and 70℉ during this time.

Saguaro national park is the best place to visit if you want to catch a glimpse of the iconic southwestern desert landscape. It’s also home to a great variety of unusual animals such as the desert tortoise or even the venomous Gila monster. Besides, Saguaro also features hiking and camping activities for every level.

Yellowstone National Park is another great national park to visit in January (if you’re ready for the cold!). It’s located in the northwest corner of Wyoming, Montana, and Idaho. Yellowstone shows off the best geyser basins and gorges for taking interesting pictures.

It’s home to enormous elk, grizzly bears, and herds of bison. If you’re up for an adventure in January, Yellowstone is the best place for you. You can be sure of snowshoeing and cross-country skiing in Yellowstone during the winter. Just keep in mind that visiting during the winter requires additional planning as well. Only Yellowstone’s northern entrance (near Gardiner, Montana) is open and maintained during the winter. In addition, attractions like Old Faithful are only accessible by snowmobile or with guides during this time.

Everglades National Park is conveniently located near cities like Miami and Orlando, making it an easy trip from some major vacation destinations. It’s one of the best national parks to visit in January due to its pleasant temperatures of around 53℉ to 77℉. Besides, Everglades is less crowded in January when compared to the rest of the months.

In addition, it is a bit easier to spot wildlife, such as the American crocodile and Florida panther, because of the low humidity and low water levels in January. You may also have a chance to birdwatch since Everglades’ warm weather attracts many different types of birds during this season.

The park is surprisingly impressive throughout the year, but it can be especially magical in January because that’s when very few people visit the park. This means you will be able to enjoy the peaceful nature Zion Park has to offer.

The Great Smoky Mountains National Park is one of the best parks on the East Coast and is found between Tennessee and North Carolina. The park has beautiful wildlife viewing, scenic drives, camping, hiking, and waterfalls that are found along wooded trails.

It’s easier to see through the forest and spot wildlife in January since deciduous trees have shed their leaves. It’s less crowded in January as well, meaning you will be able to enjoy driving the Roaring Fork Motor Nature Trail. If you’re looking for animals, Great Smoky Mountains National Park bills itself as the “salamander capital of the world.” While they might be hiding to conserve energy during the winter, if you visit Great Smoky Mountains National Park during the summer, make sure to look for its incredible variety of amphibians.

Cuyahoga valley national park is situated in Ohio, basically along the Cuyahoga river. It’s among the best national parks to visit in January due to its average temperatures, ranging between 22℉ and 37℉. The temperatures enable one to ride trains, fish, hike, snowshoe, and cross-country ski.

Cuyahoga is well-known for its astounding waterfalls and ledges. The park will provide you with the kind of recreation and solitude you want, especially if you visit there in January.

Dry Tortugas National Park is the third-largest coral barrier reef park in the world and is located in Florida. It’s one of the most interesting places to visit in late January when the weather is milder. Dry Tortugas is probably the most suitable place for you if you want to experience steamy beaches, kayaking, snorkeling, and paddleboarding.

Dry Tortugas also offers a nesting site for many sea birds, including sooty terns. So, it’s a great place for birdwatching, especially between mid and late January, when most birds are migrating south.

Yosemite National Park is an incredible valley park in California. It’s one of the best parks to visit in January when it’s not too crowded. Yosemite is best known for its giant ancient sequoia trees, deep valleys, granite monoliths, and famous waterfalls.

Because of these majestic attractions, Yosemite is a destination for visitors from across the world. So, you can avoid the crowds by going there in January.

Death Valley National Park is one of the largest, most blazing, and driest places in the U.S. It’s situated on the border of eastern California and Nevada. Its temperature ranges from 15℉ to 91℉ in January. (Yes, it gets cold at night!)

It’s well known for Titus Canyon trail, with colorful rocks – and a ghost town. It’s home to many wild animals, including rattlesnakes and desert bighorn. One may visit the park any time of the year, but being a very hot place, temperatures are a bit more favorable in January. It’s also less crowded in January.

Mesa Verde National Park is found in southwest Colorado. It was established to preserve and interpret the archaeological heritage of the Puebloans. It’s one of the most spectacular and fascinating places to visit in January. It’s well known for its Ancestral Puebloan cliff dwellings. 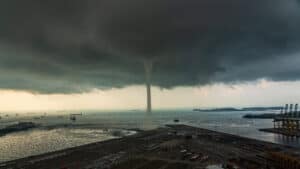