Discover The Top Five Largest, Most Dangerous Spiders In Oklahoma This Summer!

Oklahoma has a rich and wildly diverse landscape that ranges from forests and woodlands to desert-like sandy plains. So, finding the top five largest, most dangerous spiders in Oklahoma was a real challenge!

Time to get to the bottom of this!

There are thousands upon thousands of spider species native to the United States and hundreds in Oklahoma! Since researching all of them could take months, we focused on the top five most common species found in the state. You know the worst, you know the biggest, but only one vicious bite can be the most dangerous!

Danger To Humans: No danger, venom is mildly irritating, and bites are rare.

Behavior: Skittish and timid, tends to flee quickly from threats.

Physical Description: This species is easily identified by its overall translucent light green color and opaque green cephalothorax. Markings include darker speckles over the body and head, red side markings, and long, thin leg hair.

The green lynx spider is common in most of the Southern United States and is the largest lynx species in North America. It can be found in backyards and gardens throughout Oklahoma. Lynx spiders are ambush hunters that don’t build webs. Instead, they rely on their impressive speed and effective camouflage to catch prey. That speed causes them to flee from threats, and bites are rare.

Danger To Humans: Bite is painful but not medically urgent.

Physical Description: Rabid wolf spiders are a dull or medium yellow color over the entire carapace with darker legs. Identifiable markings are two brown cephalothorax stripes and one darker center abdominal stripe. Wolf spiders are stocky, thick-legged, and have four sets of eyes in vertical pairs of two.

The Rabid Wolf Spider In Oklahoma

Rabid wolf spiders are primarily found in the central and southern regions of Oklahoma. Even though they have a truly terrifying name, they aren’t nearly as dangerous as a rabid mammal! The name is due to their hunting style, which often looks like the erratic, jerky movements common in animals infected with rabies. Bites are mildly painful, not deadly, and often unrecognizable from an insect bite!

Size: Up to four inches long with legs extended.

Habitat: Southern regions of the United States and Mexico, Semidesert and scrublands.

Danger To Humans: Little to no danger, bites are mildly painful

Behavior: Docile, easygoing spiders that are commonly kept as pets

The Brown Tarantula In Oklahoma

This species is native to the Southern United States and Mexico. In Oklahoma, the Texas brown tarantula is primarily found in the Southern areas of the state. They also have several other common state names, including Missouri or Texas brown tarantula! Though venomous, the species is widely known for its particularly calm and docile nature. That’s why it’s one of the more popular tarantula species chosen as a pet!

Danger To Humans: Venomous bite is not deadly, but is slow to heal, and infections are common.

Behavior: Reclusive and solitary, but will bite if provoked or threatened.

Physical Description: This species is a translucent light brown overall color with a distinct “violin shaped” marking on the cephalothorax. Unlike most spiders, the brown recluse only has six eyes rather than eight.

The Brown Recluse In Oklahoma

Brown recluse spiders are common in Oklahoma and can be found in most regions of the state. This is one of the spiders that have a fondness for human dwellings, especially in the colder months. While brown recluse spiders have a negative reputation, it’s largely undeserved. Recluse bites are very painful and slow to heal, between one to three months. This is due to necrotic properties in their venom, but apart from an infection risk, medical treatment isn’t required!

Danger To Humans: Highly dangerous venomous bite that can kill in some cases. Quick medical attention is required. Females are believed to have more potent venom.

Behavior: Shy, timid, but will bite if threatened

Physical Description: Black widow spiders are possibly the easiest to recognize venomous species in North America. This is certainly true of the southern black widow. They are most recognizable for their shiny black carapace and signature hourglass markings. Despite common misconceptions that this hourglass is always red, white, or orange are also common!

The Southern/Northern Black Widow In Oklahoma

There are 32 known species of widow spiders, and they are found throughout the United States. Oklahoma has two species of black widows, the Southern and Northern. Both are common spiders in all regions of the state. While black widows would rather flee confrontation, their bite causes severe illness. Symptoms are fever, sweating, vomiting, respiratory issues, and muscle pain. In cases where pets, small children, or immunocompromised individuals, the black widow’s bite can be fatal. 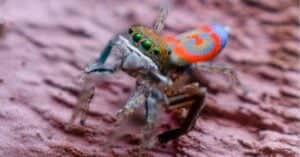 15 of the Most Colorful Spiders in the World