More Great Content:
An Absolutely Gigantic Moose Makes These Grizzlies…
See The Footage of The Rarest Bear…
Silverback Gorillas vs Grizzly Bears: Who Would…
Why Did Cave Bears Go Extinct?
5 Massive Bears Larger Than a Grizzly
Watch a Grizzly Drag a Moose Calf…
↓ Continue Reading To See This Amazing Video

Written by Angie Menjivar
Published: August 7, 2022
© iStock.com/Byrdyak
Share this post on:
More Great Content:
An Absolutely Gigantic Moose Makes These Grizzlies…
See The Footage of The Rarest Bear…
Silverback Gorillas vs Grizzly Bears: Who Would…
Why Did Cave Bears Go Extinct?
5 Massive Bears Larger Than a Grizzly
Watch a Grizzly Drag a Moose Calf…
↓ Continue Reading To See This Amazing Video

There are many situations in which humans care for animals. You’ve probably gotten your heart strings pulled when watching a video of a kitten or puppy rescue. You may have even become invested in the rescue of animals not usually seen as pets, like whales, bats, and sea tortoises.

Sometimes the rescues are tense—they keep you on the edge of your seat, hoping for the most favorable outcomes. Other times, they’re sweet and demonstrate how easily animals and humans can bond, even when they’re strangers.

In the case of this clip from Inside Edition, you see how a small Turkish community comes together to help little Hacuvan, a bear cub that lost his mother. Hacuvan was found exhausted and malnourished—he was taken to a local rehabilitation center for care.

Bear cubs need their mothers to learn how to find food and hunt. They tend to be playful at this early age, engaging in play fighting to help them get stronger and learn how to fight. Mama bears keep a watchful eye over their little ones, protecting and disciplining them until they reach about two years of age.

The team at the Yuzuncu Yil University Wildlife Protection and Rehabilitation Center spent several days looking for Hacuvan’s mother—unfortunately, they could not locate her. The team then decided it was best for them to care for the baby bear as though it were a baby human.

You can see Hacuvan in a couple of different clips following the workers around, pawing playfully at the camera, getting lots of pets on a bench, and drinking milk from a bottle. The bear quickly realized his human counterparts were friends and began playing more games with them.

In one all-too-cute scene, Hacuvan can be seen standing upright, holding his bottle. One of the workers stands just behind him, tilting the bottle enough for him to drink out of it. Hacuvan takes over the bottle completely, leans back, and the worker gently cradles his head, keeping little Hacuvan from falling backward.

Although he was certainly well-loved by the workers at the rehab center, he was transferred to Turkey’s western province of Bursa, where he could grow up in a more natural environment with other bears.

Curious about bear behavior? Watch these bears displaying unique behavior next to humans:

These 6 Poisonous Plants Found in South Carolina Are Very Dangerous 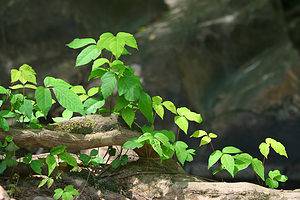