Types of Hawks In Georgia — With Pictures!

Georgia is home to a variety of diverse wildlife, whether you’re looking at the native flora and fauna or visiting some of the zoos and aquariums. There are also several different types of hawks in Georgia — six to be exact! While some types of hawks may pass by the state in their migration further south, these are the six that you can find for at least most of the year, if not all year.

Ready to learn more about the types of hawks in Georgia? Keep reading!

Although the broad-winged hawk is one of the more common types of hawks in Georgia, you wouldn’t think that. Because they favor deep forests and rural environments, it can be difficult to spot them during your day-to-day routine. However, if you happen to see one, these birds can be easily recognized.

The broad-winged hawk is a short and stout hawk. These birds are built with a fairly rectangular shape, with even their short tail ending in a blunt shape rather than tapering off the way many of the other types of hawks’ do. They have two different colors, coming in either a darker or lighter pattern, but the latter is much more common.

Broad-winged hawks are highly migratory. They can be found alongside many other types of hawks in Georgia during most of the year, but they do favor South America during the cooler months of the year. This can make it difficult to spot them when you’re birdwatching. However, if you’re lucky, you’ll be able to catch a glance at the “river of raptors” — thousands of broad-winged hawks coming together to fly south.

Cooper’s hawk is one of many types of hawks in Georgia. They’re of an average build, although they do have rather large heads. These hawks are expert flyers, and they spend their time flying at high speeds through their forest homes.

For the most part, hawks hunt like any other predator. They catch their prey and then use their mouth to deliver a fatal bite. This isn’t true for Cooper’s hawks, however. They prefer to use their razor-sharp talons when hunting prey. Some may even choose to use their talons to drown their prey first.

When it comes to identifying the northern harrier, you may find yourself doing a double-take while hawk-watching. This is because the northern harrier has a flat face, which helps them listen out for prey. The result? They can easily be mistaken for owls!

That’s not the only unique part of about the northern harrier’s appearance, however. They also have a unique banding across their tail, giving them the nickname of the ring-tailed hawk. Due to their light grey color, their dark markings (such as their tail bands) stand out. They’re even easy to pick out while flying! This is because as they’re flying, rather than holding their wings straight out at their sides, they fly with their wings in a slight “V” shape.

Hawks are some of the most impressive fliers out there. They’re able to reach impressive heights, and their stamina allows some species to travel thousands of miles. However, despite being able to reach these amazing limits, the northern harrier is actually happier closer to the ground. These hawks like to fly low over clearings, such as meadows and grasslands. When they do perch, they prefer to do it lower, rather than go for the highest point possible.

Despite being one of the most common hawks in the United States, the red-shouldered hawk actually has a fairly limited range. Unlike other types of hawks, which can thrive almost everywhere, the red-shouldered hawk prefers tall forests over water. This means that they do best in the swampy areas of the southeast, which is why they’re one of the most common types of hawks in Georgia.

Because of their habitat, the red-shouldered hawk’s diverse diet is made up of the many animals found in semi-aquatic habitats. This includes crawfish, snakes, frogs, toads, and similar prey. However, the red-shouldered hawk will also eat prey similar to that of other birds of prey, such as mice, squirrels, and other small mammals.

When it comes to nature, everything is in constant competition. Even trees and plants fight for resources, such as space and sunlight. The red-shouldered hawk is no exception. Along with other birds of prey, the red-shouldered hawk has also found a competitor: the crow. These two will often battle for territory. However, as the old saying goes, a friend of one’s enemy is their friend. As a result, when great horned owls are involved, red-shouldered hawks are known to pair up with crows to chase the owl out of the area.

The red-tailed hawk is one of the most well-known types of hawks in Georgia. However, they’re also common elsewhere. In fact, you can find the red-tailed hawk in almost every state in the continental United States. You can also find them in Central America and further north into Canada.

Not only are they a common sight in nature, but they’re also a common figure in media. Whether it’s in movies and shows (where they act as a voice actor for that iconic bald eagle screech), or in books, red-tailed hawks seem to pop up everywhere in pop culture. Red-tailed hawks are also one of the most popular species used in falconry. Falconry is a type of hunting sport where birds of prey, such as many of the types of hawks in Georgia, are used to hunt and retrieve small prey like mice and rabbits.

There are several different subspecies of red-tailed hawks. Some may be more common in certain areas compared to others. Overall, there are few appearance changes between red-tailed hawks. For the most part, they maintain their key identifying factors, with some having a lighter or dark morph (color) than other subspecies.

Often, it can be hard to miss a hawk. They’re large, with some having wingspans the size of an adult human. However, the same cannot be said for the sharp-shinned hawk, the smallest hawk in the United States and Canada. Adult male sharp-shinned hawks can be as small as 9 inches long and weigh less than 3 ounces. Females, however, are a little larger, growing up to 15 inches long, with a wingspan nearly double their length.

Despite being some of the smaller birds you’ll find in the wild, and the smallest type of hawk in Georgia, the sharp-shinned hawk is still an effective predator. You’ll notice that they tend to frequent suburban and urban areas, especially around bird feeders. However, they’re not interested in the birdseed you’re putting out. Instead, they like to take this opportunity to hunt the small songbirds that will come to eat at the feeders. They will also make a quick meal out of mice and other small mammals that will visit as well.

Although they’re one of the more notable types of hawks in Georgia, you can find the sharp-shinned hawk in many places in the western hemisphere. There are ten different subspecies ranging from Canada to the southern tip of South America. Subspecies found in Mexico and the south are actually much larger than their northern counterparts.

Discover the Highest Point in Maryland 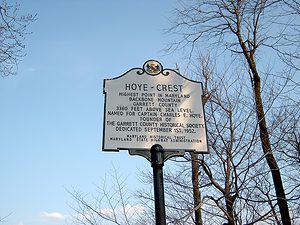