Types of Hawks In Virginia — With Pictures!

From the mountainous west to the coastal east, there’s no shortage of diverse habitats in Virginia. As a result, a variety of species are able to thrive here. Ready to learn more about the different types of hawks in Virginia? Keep reading below!

The broad-winged hawk is a compact species of hawk. While they are one of the larger species based on length alone, they have a very stout, rectangular build. They have short wings and blunt tails. As a result, it can be easy to recognize them compared to other, leaner types of hawks in Virginia.

Broad-winged hawks prefer highly forested areas over grasslands and other sparse landscapes. As a result, it can be difficult to spot them during your regular hawk-watching unless you’re looking for them specifically. Some studies also suggest that this amazing hawk has a population that’s in decline due to loss of habitat.

Occasionally, outside of forests, there are two areas you may see them. First, they appear along forested roads, either flying or perching. When it’s time for migration, you can see them in the coastal areas.

In terms of migration, that seems to be one of the main ways that the broad-winged hawk spends its time. There are little to no year-round populations of broad-winged hawks in the western hemisphere, even in Virginia. The only areas where you could find them no matter the season is in the Caribbean, such as Cuba and the surrounding areas. During the winter, they go further south into South America. This means that the best time to look for them alongside the other types of hawks in Virginia would be during their summer breeding season.

In some areas, it may also be best to look for them during migration. Because they have a habit of migrating over the open coastal areas, you may have a better chance of spotting this wonderful type of hawk.

Although it seems to come naturally to birds, flying isn’t always easy. In fact, when you live in forested areas like the Cooper’s hawk, it can be downright dangerous! One study that analyzed Cooper’s hawks found that 23 percent of the birds in the study had suffered from fractures, which eventually healed naturally.

One of the main sources of food for Cooper’s hawks is smaller birds, like doves and pigeons. However, this isn’t without its risks, especially for younger hawks. These small birds, especially pigeons, can carry parasites that can be detrimental to young Cooper’s hawks.

They use their sharp talons to catch and kill their food, unlike other types of hawks in Virginia that will use their beak after catching their prey. Although Cooper’s hawks seem to sustain several types of injuries when flying, they do reduce the risk when possible. One method is by drowning their prey to finish it quickly!

Because of their preference for pigeons, Cooper’s hawks can actually be a common sight in urban areas, despite their home in the forests. They also favor areas where small birds are common, which can include birdfeeders.

It can be hard to miss the northern goshawk. They can come in a variety of colors, with the most common being white and grey with thin dark stripes across their chest. Some rarer populations found further north can be almost completely white! The northern goshawk also has a striking red eye. As a result, though they can be a rare sight in Virginia, they’re easy to spot when birdwatching.

Sometimes, identifying birds isn’t always easy. For the northern harrier, this is a fact that is especially true. Typically, hawks have similar features, no matter how their coloration and size vary. The northern harrier, however, has traded the usual sharp hawk face for a flat face fit for hearing prey better. While it comes with its hunting advantages, such a face can make it where the northern harrier more closely resembles an owl than any of the other types of hawks in Virginia!

That’s not the only way that the northern harrier tends to differ from other types of hawks, though. Despite being able to soar well above the tops of most trees, the northern harrier actually doesn’t prefer to reach these heights. Instead, you’re more likely to see them swooping low over grasslands in search of food. When they’re not flying, they can be seen perching on low branches and manmade structures.

The rough-legged hawk is named for one extremely unique feature it has. When looking at the other types of hawks in Virginia, this hawk is the only one with this characteristic. In fact, only three birds of prey overall have this feature! Are you wondering what it is? Well, as their name may hint at, it’s their feathered legs!

Feathered legs are extremely rare in the bird world. In fact, other than the ferruginous hawk and the golden eagle, you won’t find many other birds with this feature, if you’ll find any others at all! While it may just seem like a fashion choice, these additional feathers can help keep the rough-legged hawk safe in its natural habitat. This is because the rough-legged hawk is most common in the far north of North America, in the Arctic, and in sub-Arctic zones, where the climate is colder. You can find them soaring alongside the other types of hawks in Virginia during the winter months, however.

That’s not the only interesting thing about the rough-legged hawk. They are also known to drag bones into their nests for extra support, with the most notable being caribou bones.

The red-shouldered hawk is likely one of the most common types of hawks in Virginia, along with the red-tailed hawk, the sharp-shinned hawk, and Cooper’s hawk. However, unlike many of these other types of hawks, you won’t find the red-shouldered hawk thriving just anywhere in the United States. Instead, these birds of prey are actually quite particular about where they build their nests.

Unless you’re talking about seabirds, you don’t often associate birds with water. However, that’s exactly what you should do with the red-shouldered hawk! These hawks are known for building their nests in the tall trees surrounding water sources, typically around lakes, rivers, creeks, and swamps. As a result, they’re a staple species in the swampy southeastern United States.

Because of their environment, the red-shouldered hawk is known to have a highly diverse diet. This includes common prey like snakes, rabbits, and mice, but it also includes animals like frogs, toads, and crawfish!

Have you ever heard a bald eagle screech on television? Depending on the types of movies you like to watch, you may be very familiar with this sound. However, despite popular belief, it actually isn’t a bald eagle behind these sounds! Instead, it’s become popularized in the media industry to use the red-tailed hawk’s screech to replace the bald eagle’s clucking sound.

You can find the red-tailed hawk almost everywhere across North America, with most populations being in the United States and Canada. There are several different types of subspecies. Many of them look similar, however, some may vary in size and color.

The sharp-shinned hawk is actually the smallest type of hawk in Virginia. Not only that, but it’s one of the smallest hawks in North America, as well as the smallest in the United States and Canada. While that spot technically goes to the male sharp-shinned hawk, which is much smaller than his female counterpart, both genders are still well below the size of the other hawks you’ve seen on this list.

Sharp-shinned hawks are a common occurrence alongside Cooper’s hawks. This is because, despite their small size, their diet is actually made up of smaller birds as well! As a result, they’re a common visitor to bird feeders. However, much like Cooper’s hawk, they’re not there for the birdseed! Instead, the sharp-shinned hawk, along with insects and small mammals, like to prey on the small songbirds that can be found here.

You’ll also find that both the male and female sharp-shinned hawk play a role in childrearing. While males seem to take the brunt of it in the first few months, being the main provider of food, both parents will team up to teach their offspring how to hunt in the air.

Discover 10 Florida Insects and Arachnids That Bite or Sting (Ranked by Most Painful!) 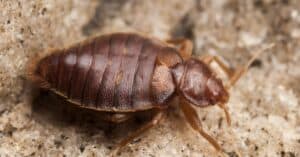