Written by Colby Maxwell
Updated: February 3, 2023
© EcoPrint/Shutterstock.com
Share this post on:
More Great Content:
Leopard vs Jaguar - The 7 Key…
This Young Leopard Hunting Has No Idea…
What Do Leopards Eat?
How Many Leopards Are Left In The…
10 Incredible Amur Leopard Facts
Next Level Leopard Somehow Catches an Eagle
↓ Continue Reading To See This Amazing Video

When we see movies that depict animals, especially animated ones, it can often give us a skewed understanding of how nature really is. In The Lion King, for example, Pumba is a warthog that is known for his gassy nature and silly antics. Well, while that makes for good cinema, warthogs are actually some of the toughest creatures around, even when fighting Africa’s top predators! In one recent video, we see that incredible toughness comes out in a rather shocking way.

In a video released only a few weeks ago, we see just how resilient a warthog can be. The clip is short, less than two minutes, but it’s pretty astounding how things shake out. Things begin with a stealthy leopard stalking prey in tall grass.

As the leopard moves forward, it essentially disappears into the grass, invisible to the human eye. It’s clear that the spots on this big cat are working how they were intended! Then, we see the leopard running down the road, clearly chasing something that it intends to eat.

Suddenly, a warthog bursts from the brush, but strangely, neither animal reacts to the other as you would expect. Then, the leopard seems to ignore the warthog, confusing the warthog that just assumed it was going to be lunch!

What makes the video a bit amusing is the fact that the warthog, once it realized that it wasn’t being chased, just went back to what it was doing! After staring at the leopard for a few moments, it decided it wasn’t really a threat, and it wouldn’t have to worry.

Why did this strange encounter happen? Well, there are a few options. The first theory is that the leopard was actually hunting something else. As you can see in the video, the leopard seems to be looking at something deeper in the brush and isn’t as interested in the warthog. The second theory is that the leopard is young and is still learning to hunt. The true story? Potentially a combination of both theories. The young leopard may be unsure of its ability and is a bit nervous to try and kill an adult warthog. Additionally, it could be interested in a small creature that it sees in the grass since an adult warthog could be too dangerous. In fact, the “smaller creature” that the leopard sees in the grass could be a baby warthog. The way that the warthog runs back into the grass after the leopard sees it looks like it may be trying to protect its young.

Warthogs aren’t top predators, especially in Africa. Even still, they can be quite dangerous and could potentially harm a big cat like a leopard. Adult warthogs have large tusks and are exceptionally strong, just like boar in North America. If a big cat were to make a mistake, one swing of those tusks could spell disaster. Although big cats like leopards and lions are apex hunters, they almost always prefer an easier kill over a tough and stubborn one. It looks like the possibility of an easier meal may have saved that warthog’s life!

Is it Normal for a Warthog to Ignore a Leopard?

Warthogs are killed and eaten by big cats every day. It is shocking and rare for a warthog to ignore any predator – especially a leopard. Something happened in the video that we couldn’t see – or this particular warthog was simply the bravest of his species!

Make sure you check out the video to see for yourself. 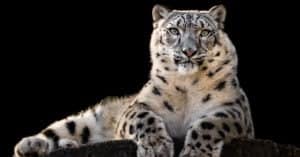