Was This Deadly Dinosaur Also the Dumbest Ever?

Anybody who’s seen a dinosaur movie, flipped through a book about dinosaurs, or even driven past a dinosaur museum on the side of the road can recognize the spikey silhouette of a Stegosaurus.

You might not have known its name, but you’ve certainly glanced at a re-creation or two. These dinosaurs are very interesting to look at, mainly because they had rows of large plates protruding from their backs. These spikes were “kite-shaped,” although you could imagine them like large leaves or a series of small, non-functional wings.

They also had sizeable spikes on their tails, making them look absolutely intriguing. Despite its gnarly appearance, the Stegosaurus might not have been the brightest beast of the Late Jurassic.

Dinosaurs weren’t known for their big brains, but these armored icons might very well have had the smallest noggins of all. Let’s take a look.

How Big Was a Stegosaurus Brain?

Most of us imagine that a big animal would have a proportionally large brain. If you were about to look into an elephant‘s skull, you’d expect the brain to be pretty big. In the case of the elephant, you would be right.

Not all creatures have the same brain proportionality, however.

The Stegosaurus grew to lengths of nearly 30 feet, stood roughly 10 feet tall, and weighed just under 8 tons. For comparison’s sake, that’s about the height of an elephant and the length of a massive anaconda.

Examination of Stegosaurus braincases shows that their brains were roughly the size of a dog’s. That’s just under three ounces.

Human brains typically weigh about 3 pounds, which is sixteen times larger than the Stegosaurus’ brain. According to Kenneth Carpenter of the USU Eastern Prehistoric Museum, the Stegosaurus brain “had the size and shape of a bent hotdog.”

What does a bent hot dog-shaped brain say about intelligence, though?

Do brain size and intelligence really have a strong correlation? Think of the swift, clever motions of a rat as it weaves its way through the forest floor. What about the dutiful order of ants marching great distances and following a scent trail back home?

These are tiny creatures with tiny brains, but they’re certainly intelligent.

Studies on human brain size and intelligence also suggest that size probably has an impact on intelligence, although that impact accounts for less than 2% of a person’s educational and professional outcomes. Even that estimate is controversial, with larger studies suggesting an even smaller relationship.

Birds, some of our last living dinosaur cohabitants, are known for incredibly complex behavior despite their small brains. Think twice the next time you want to call someone a “birdbrain”!

You might swap “birdbrain” for “bent hotdog brain.” That will really show them.

What about the ratio between body mass and brain size? A walnut-sized brain would be massive for something small like a mouse or a bird. It’s only when we imagine it between the eyes of a lumbering dinosaur that it seems inadequate.

A paleoneurologist named Harry Jerison created a formula to estimate a creature’s intelligence based on body mass and brain size. This applies to dinosaurs and animals alike, using various factors about the animal to create a well-rounded idea of its intelligence.

Factors like warm-bloodedness, lifestyles, and more can tip the scales in either direction. The process determines the creature’s Encephalisation Quotient (EQ).

Humans rank highest with an EQ of 7.6, dolphins are second with 5.3, and the vast majority of the animal kingdom falls somewhere from .25 to .75.

Most herbivorous dinosaurs are estimated to have had very low scores. Our spikey Stegosaurs friends weren’t the least intelligent, however.

The Sauropods were the least intelligent, coming in with EQs of around 0.1 to 0.2. These were the largest animals ever to roam the earth, with extremely long necks stretched outward to access Jurassic vegetation.

Get to Know the Stegosaurus

The Stegosaurus was a genus of Dinosaurs of the Thyreophora clade. They lived in the Late Jurassic period, which ranged from around 163 to 145 million years ago. Members of this clade (branch) are distinguished by their “armored” backs, comprised of plates that might have been used as defense mechanisms, heat regulators, sexual signals, and intimidation devices.

It’s also worth noting that S. stenops isn’t the only member of the Stegosaurus genus. Other subspecies include S. armatus, S. homheni, S. mjosi, S. sulcatus, and S. ungulatus.

All of the animals in the suborder had similar plates and spikes called thagomizers on their tails. These spikes are thought to have been used as defensive tools. They would have been large and sharp enough to penetrate predators, especially considering the force that would be generated by the Stegosaurs’ long tails.

The name “Stegosaurus” literally means “roofed lizard.” Othniel Charles Marsh, one of two key paleontologists involved in Stegosaurus’ first description, suggested that the plates would have laid over the dinosaur’s back, similar to the shell of a turtle or back of an alligator.

It was for this reason that it was inaccurately named “roofed lizard,” although the name stuck around.

What Did the Plates Do?

Some researchers support the idea that the plates were used for defense. Other researchers describe the “plates as armor” theory as “clearly falsified.”

Some of the well-accepted arguments for the functions of these plates are as follows:

Stegosaurus was a genus of herbivorous dinosaurs, and the same goes for the neighboring genus and species. The manner in which they ate plants isn’t well understood, however.

The confusion about Stegosaurus‘ feeding habits stems from their unusual teeth and jaws. The Stegosaurus’ jaw was probably limited to up and down movements, rather than shifting lateral movements that allow grinding.

Further, their teeth weren’t situated firmly together, so it would have been difficult for them to grasp and chew plant matter based on the evidence that researchers currently have. This remains a mystery, and there are certain aspects of Stegosaurus’ feeding habits that are still undiscovered.

Remains from the Stegosaurus genus have been discovered primarily in the states of Wyoming, Colorado, Utah, and New Mexico. North American discoveries are limited to this stretch of the Rocky Mountain Range.

Stegosaurus remains have also been discovered in Portugal and Northern China along roughly the same latitudinal line as the North American Discoveries. This distribution could be due to common ancestors around 60 million years prior when eastern North America was connected to western Eurasia.

The first Stegosaurus bones were discovered in Morrison, Colorado in 1850. The discovery included vertebrae, one of the species’ characteristic dermal plates, and some other uncategorized bones.

It was more than 20 years later that Othniel Charles Marsh would name and interpret the bones. In 1878, another principal Stegosaurus was discovered in Garden Park, Colorado, although it was named Hypsirhophus discurus at that time.

The second specimen is now considered to be a member of Stegosaurus. The primary paleontologist in the second discovery was a man named Edward Cope.

Cope and Marsh were rival paleontologists, digging themselves into a feud that’s now known as “The Bone Wars.” Each man was extremely determined to out-discover the other, using dishonest and severe measures to win.

They also slandered, manipulated, and obstructed the reputations of one another. Both men were wealthy and funded numerous personal digs and expeditions of discovery with their own money. Unfortunately, both men succeeded in their attempts to ruin the other, leaving Marsh and Cope penniless and socially disgraced.

That said, their fervent efforts to discover fossils allowed researchers to identify and describe more than 130 new species, including our famed Stegosaurus. Further, Cope and Marsh are often credited with a spurred cultural interest in Dinosaurs and fossil discovery.

Why is Stegosaurus The Dumbest Dinosaur?

Stegosaurus is often (incorrectly) regarded as the dumbest dinosaur because of the small size of its brain, which weighed less than 3 ounces.

That’s roughly 1/16th the size of an average human’s brain. While Stegosaurus had a small brain relative to the size of its body, the Sauropods had the smallest brains, proportionally.

Did T-Rex Live with Stegosaurus?

Large carnivores like those in the Allosaurus genus were just as large, scary, and dangerous as T. rex, however, and they lived alongside Stegosaurus in the Late Jurassic.

What is a Stegosaurus Known For?

Stegosaurus was known for large dermal plates lining its back and the thagomizer at the end of its tail. These two features are what distinguish Stegosaurus from thousands of other dinosaurs that aren’t as famous in popular culture.

The Flag of Namibia: History, Meaning, and Symbolism 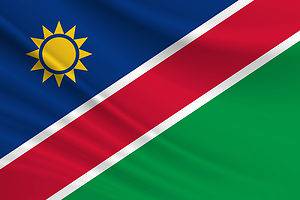