Moose are generally peaceful creatures—though, in the fall, during mating season, bull moose tend to be more aggressive. The females may also get aggressive when protecting their young. Although they are the largest of the deer family, moose have nervous dispositions.

If something startles them—whether people or another animal—they can easily become overwhelmed and stressed out, which could result in aggressive behavior.

Bears, on the other hand, are not nervous creatures. They are capable of taking down large animals, including moose. Grizzly bears can tackle a full-grown moose, and black bears can tackle baby moose. In this video, you see the massive size difference between a moose and a bear, and you also see how the tables can turn when a moose displays aggressive behavior.

The video is taken by a person standing on a balcony overlooking a gorgeous lake. Right in the center of the camera frame, you spot the female moose, or cow, running out of the water, making splashes as she runs. You can hear some vocalizations in the air, and the bear hasn’t come into view yet.

Suddenly, you spot the bear running around a small shed, trying to get away from the moose.

The moose follows closely behind the bear, and the camera pans over, where you can see a small group has gathered to take in the unusual event. The backdrop is breathtaking, with snow-capped mountains towering over tall trees that line the lake.

The people on the balcony are captivated, and the person who filmed this video isn’t the only one capturing the moment on camera.

He makes his way over to the railing to get a better look, and you can see the bear has gone down toward the water in its attempt to get away from the moose.

However, it doesn’t venture into the water. It turns around and starts running in the opposite direction.

The moose is ready and waiting, and as soon as the bear approaches again, she’s ready to chase it down. The bear, in a state of panic, seeks shelter inside the building where the cameraman and group of others are.

Unfortunately for the bear, it gets confused and crashes straight into a window on the first floor. It doesn’t make it through, but it startles the bear, and it runs off in the direction it came.

At that point, the moose stops pursuing it.

You can hear the surprised reactions from the crowd that gathered as they process what happened.

Is It Normal For Moose to Chase Down a Grizzly Bear?

Normally, no, moose do not tend to be aggressive towards bears. Additionally, if a bear and moose were to fight, the bear would win as bears are more aggressive and stronger.

With that said, moose aren’t more dangerous to humans than bears are. However, moose do pose a greater threat of injury to you as a person because of their population size.

There are simply more moose than bear attacks because moose are more common and come into contact with people more often than bears do.

During certain times of year such as mating season, moose can also be particularly aggressive.

Where do Moose and Bears Live?

Bears are found throughout North America, South America, Europe and Asia. Bears live all over the United States but are low in population and rarely seen in North and South Dakota, Nebraska, Kansas, Iowa, Illinois, Indiana, Ohio, Oklahoma, central and northern Missouri and central and eastern Texas.

How Long do Moose and Bears Live?

Moose typically live 8 – 20 years in the wild. Researchers have found what may have been the oldest wild moose on record, a Michigan cow who was 22 when she died.

Bears live an average of 10-20 years, depending on species. Some can even reach 30 years of age or more in captivity. Debby, a female American black bear, is considered the oldest bear that ever lived. She died at the age of 42 in the Assiniboine Park Zoo in Winnipeg, Canada.

Up next, more bear encounters:

Where Do Loons Go in the Winter? 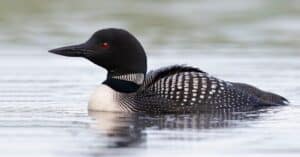