Written by Kirstin Opal
Published: November 21, 2022
© Frank Wouters / Creative Commons / Original
Share this post on:
More Great Content:
Hippo Attacks: How Dangerous Are They to…
What Do Hippos Eat?
Hippopotamus Teeth: Everything You Need to Know
Discover How Congress Almost Filled the Mississippi…
Enormous Hippo Attacks Three Adult Male Lions…
Hippo Size: Just How Much Does a…

In many animals in the animal kingdom, the mother is the only one who has to take care of the young. For most of the hippopotamus’ first year of life, both of his parents dedicate themselves to caring for and protecting their young. A young hippo, who is the lone child, is the focus of their attention.

The calf will stay with his mama for a number of years and socialize with up to four siblings who will be born later. The typical adult female hippopotamus weighs 3,000 pounds, whereas the standard adult male can weigh anywhere between 3,500 and 9,920 pounds.

With the help of his parents’ life lessons, the hippopotamus uses his preservation abilities to get by for around 36 years. Peter Geraerdts is no stranger to these animals and caught an incredible interaction involving a hippo calf, its mother, and a ferocious leopard!

The protective mother fought off the large cat once and walked away unharmed, with her curious newborn in tow. Thinking she sent a message to the leopard, the two continued on their way. Little did they know, the cat wanted to take another chance at a fresh lunch.

How Hippos Defend Themselves

Hippos defend themselves by congregating in herds, which can contain 10 to 30 animals. Although the hierarchy among the animals might occasionally cause conflict within the herd, overall the animals stay together and defend their own.

This mother was out on her own when the leopard decided to attack for a second time. As the cat approaches, you can see the stark difference in size between the two species. The hippo is overpowering and large, making the spotted cat look like something you’d find at a local pet adoption center.

Hippopotamuses are particularly deadly animals to engage in combat with due to their formidable jaws. For instance, a hippo can actually bite a crocodile in half or tear apart an approaching lion with its jaws. Hippos can turn vicious when the situation calls for it, despite first appearances to the contrary.

The mother stares down the stalking cat as it walks backward, still protecting her young. Eventually, with other wildlife watching from the grasslands, the leopard makes its move and attacks the calf. It barely touched the animal before it ran back to its mother.

Mister leopard backs off and sits in awe, letting the two hippos walk away relatively unharmed. We think the cat eventually got the message that this wouldn’t end well for him if he kept trying to hurt the calf. 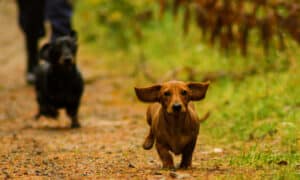 Can Dogs Drink Beer, What About Other Alcohol? 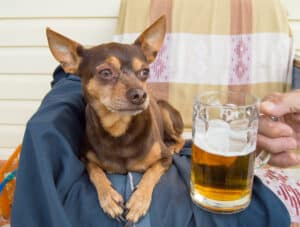