Lake Superior is the largest of all the North American Great Lakes. If ever you’re flying over the US states of Wisconsin, Minnesota, or Michigan, you can spot this huge lake that nearly resembles an ocean. If you didn’t know exactly where you were, you might confuse it for the Atlantic. This is also true if you’re traveling over the Canadian province of Ontario because Lake Superior connects these two countries.

On average, the depth of Lake Superior is about 483 feet, and the deepest part reaches 1,332 feet. This great lake contains a surprising 10% of all the earth’s freshwater and it covers a total area of 31,700 square miles. It’s been around a little over 1 billion years and some people venture out to spot the northern lights from the lake.

Lake Superior has a storm season that spans from October into November. During this season, the lake develops waves the way a beach does. Some of the largest waves ever recorded reached an unbelievable 28.8 feet! This was back in October 2017.

This video captures the storm season on Lake Superior and the Great Lakes, with captivating footage from several different angles. The waves swarm in, rough and choppy—the sound is soothing, but you wouldn’t want to be caught in the water when they’re roaring through.

You can enjoy a beautiful view from the shore with multi-colored rocks—you see red, orange, and grey hues throughout as you watch several waves form and approach the camera, with some reaching so close, that they splash against the lens.

Some shots are zoomed in while others offer more of a broad perspective. The waves are quite large and unrelenting, rushing toward shore on top of each other, creating an incredible display of white foam and splashes that reach toward the sky.

The waves intensify as the video continues and you can imagine the awe you’d feel if you were there witnessing it all in real-time. You’d surely need to be dressed for the cool temperatures—this lake is the coldest of all the greats with an average temperature of 37.5 degrees Fahrenheit.

The end of the video shows the two adventurers who braved the cold to capture this footage. You watch as they set up their cameras to capture the mesmerizing scenes you’re about to see.

Up Next, Explore the Dramatic Footage Captured by These Adventurers:

Can You Hatch a Cracked Chicken Egg? 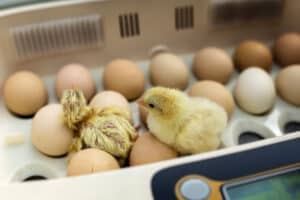